Apple just wrapped its "California Streaming" event where the company unveiled several new hardware products, including four new iPhones, a new Apple Watch, and two new iPads. We didn't hear when Apple will release iOS 15, but we should know more about its availability soon.

If you missed the all-virtual event, don't worry. We spent our morning covering every detail and tidbit revealed during the stream. Below you'll find a recap of each announcement Apple made during its Sept. 14 event.

New iPad and iPad Mini. The base model iPad is getting an update. The ninth-generation iPad is getting the A13 Bionic processor, up from the A12 in the eight-generation iPad. In addition to faster performance, the new iPad will benefit from an upgraded image processor in the A13 Bionic. But more importantly, the front-facing camera has a 12-Megapixel camera with a 122-degree field of view. The new hardware enables a feature that up until now had been limited to the latest iPad Pro — Center Stage. The camera will automatically zoom in and out as people move around, or more people walk into the camera's field of view during a video call.

The new iPad is getting a display update, as well. TrueTone, which auto-adjusts the screen's tint to match your surroundings, is also making its debut on the newest iPad.

Of course, it'll run iPadOS 15 when it's released.

Apple kept the $329 price point but doubled the storage to 64GB. Education customers can get the new iPad for $299. Preorders start today, with orders arriving next week.

The iPad Mini is getting its biggest refresh since it was originally launched. The new design looks like the same design the iPad Air and iPad Pro have, with flat edges on all the sides. The Liquid Retina display now measures 8.3-inches, up from 7.9-inches. Despite an increase in size for the display, the Mini is the same footprint as the previous iPad Mini.

Touch ID has been moved to the sleep/wake button on top of the housing, using the same technology the iPad Air launched with last year. The same can be said about Apple swapping out the Mini's Lightning port for a USB-C port — making it ideal to transfer a lot of data or offload photos to the tablet. 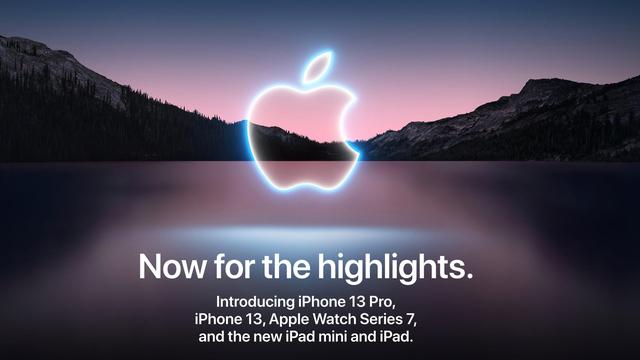 The Apple Pencil second generation, which magnetically attaches to the side of the iPad to charge, is now supported by the iPad Mini as well. The new iPad Mini comes in four colors this time: purple, pink, starlight and space gray. The new iPad mini starts at $499, with preorders starting today. Orders arrive next week.

WatchOS 8 will detect when you start riding a bike and prompt you to start a workout. There's also a new workout algorithm for eBike riders, along with improved fall detection when you're riding.

The new features join the announcement of the Apple Watch Series 7, which has a display that's roughly 20% bigger than the Series 6. The increase in screen size was achieved by reducing the bezels around the display.

According to Apple, the additional display size allows for bigger buttons in apps, more text in messages, and now a full-sized keyboard you can tap or swipe across to reply to a message. New watch faces take up extra screen space by adding more complications. Apple is also touting the Series 7 as the most robust Apple Watch yet. It has IP6X certification for dust and WR50 water resistance for swimming.

Battery life should get you through a full 18-hour day, and it now charges even faster than previous Apple Watch models. According to Apple an 8-minute charge is enough to monitor 8 hours of sleep.

If you're a current Apple Watch user, don't stress about your watch bands not being compatible. The larger Series 7 will work with your current bands.

Apple didn't provide a release date or price, but did say it would be available later this fall.

Apple's Peloton-like fitness service will expand from six countries, adding 15 new countries later this year. The service will also gain pilates, guided meditations and workouts to get ready for snow season. That is, workouts to help you get stronger for the coming skiing and snowboarding season.

Apple is also adding group workouts to Fitness Plus so you can invite friends and family members to share a workout with you. It's coming to iPhone, iPad and Apple TV through AirPlay. You can have up to 32 people take part in a group workout.

One of those improved camera features is a new Cinematic Mode that adds blur to the foreground and background of a video, before, during and after you capture the video. Or you can let the camera identify when an area in a video should be in our out of focus and apply effects on its own.

You can read more about all of the details and new features for the new iPhone 13 models here.

Tags:  how to connect apple watch to ipad for fitness plus

Wimbledon Covid rules: How the new regulations work, tennis ‘bouncers’ and what to expect on TV