Location
Home → Article → Wimbledon Covid rules: How the new regulations work, tennis ‘bouncers’ and what to expect on TV

Even in normal times, Wimbledon loves rules – from the players’ kit (strictly white-only from top to toe) and the “smart” dress code for members, to the “precisely” before the opening match time on the order of play.

Now Covid has added another level of “you can’t do this” and “you must do that” to the visitor experience as the tennis championships start on Monday 28 June under the Government’s Event Research Programme (ERP) as the UK moves out of pandemic restrictions.

Any reasonable person will welcome the restrictions – including no cash payments on site, and face coverings to be worn – but the blazers (the honorary stewards who act as tennis bouncers, dressed up in regulation jackets) at the All England must be excited by all the extra rules they can impose.

For many regular attendees at Wimbledon, the tennis is often sublime but the pettifogging rules can be wearisome, whether it’s about what kind of picnic bag spectators can bring in, or how much alcohol they can put in it.

I recall my former sports editor telling me about a zealous steward, or as he put it, “a posh tw*t in a blazer”, guarding one of the Centre Court entrances. 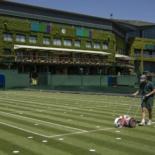 He harangued a woman, who spoke little English and who was making her first visit to Wimbledon, after she mistakenly got up to leave after the first game of a set (spectators must wait until after the third game) and threatened to deprive the by now tearful tourist of her ticket.

Only the intervention of several outraged journalists who witnessed the incident meant she could return to her seat.

The All England is a private club dating back to 1877 and numbers royalty among its current members, so perhaps it is to be expected that it is mustard keen on upholding the British tradition of telling people what they can and cannot do, preferably while they are wearing a club tie in green and purple.

The All England Club also has a long association with the military; you will see more people in uniform at Wimbledon than at Trooping the Colour, including doorkeepers from the Armed Forces, a phalanx of temporary G4S security staff (actually often poorly paid students looking uncomfortable in ill-fitting suits) and the “blazerati” – made up of members of the club and strict adherents to its rules and regs.

The list of new no-nos this year (and, one hopes, just for the Covid-affected 2021 Championships) is long: it includes no queue and, therefore, no overnight camping for keen fans who in normal times would be able to buy tickets on the day, no public access to the practice courts, and no players’ autographs after a match.

As well as social distancing and new one-way systems around the ground, rules for entry will also be strictly applied. Double-jabbed? You will have to prove it by registering with the NHS app and bring identity. Over 11 but haven’t had the vaccine? You must register a negative lateral flow test on the NHS app within 48 hours of attending.

But some good news: at least Henman Hill, another Wimbledon staple, can have fans sitting on it watching the action on the big screen – although their numbers will be reduced. There will be a maximum daily crowd of 21,000, 50 per cent of normal – although the numbers on Centre Court will rise to 100 per cent for the final weekend under the ERP as the UK moves out of pandemic restrictions.

The vast majority of fans follow Wimbledon on television and this year they will notice some differences. Sue Barker and other presenters will be socially distanced from their guests in the studio, while player interviews will be restricted. And for much of the championships the stands will look sadly deplete. But them’s the rules.

Here's everything Apple announced at its iPhone 13 event