Remember the meme about the kid who gave a nervous side-eye look? Well, he just won the New Jersey football state championship this week. The revelation immediately went viral on the internet.

On August 21, 2013, Vine user TheRealSnoopy posted a video titled "Terio At Popeyes!" which featured a kid giving side-eye glances. According to Know Your Meme, the post received more than 19 million loops, 670,000 likes and 591,000 revines in less than seven years.

The video posted by Vine Turkey is embedded below.

Admittedly, the kid in the video left quite the impression on the internet. Its snapshot photo is widely used as a meme to convey nervousness, skepticism and wide-eyed suspicious looks. Up to date, anybody can find traces of this meme on social media platforms like Facebook, Twitte and Reddit.

However, the internet star "Lil Terrio" apparently outgrew his meme role in these last few years.

According to Fansided, Dieunerst Collin is now a member of the East Orange Campus High School football team. He played on Sunday night and recently became the part of the Group 5 New Jersey State Champions. 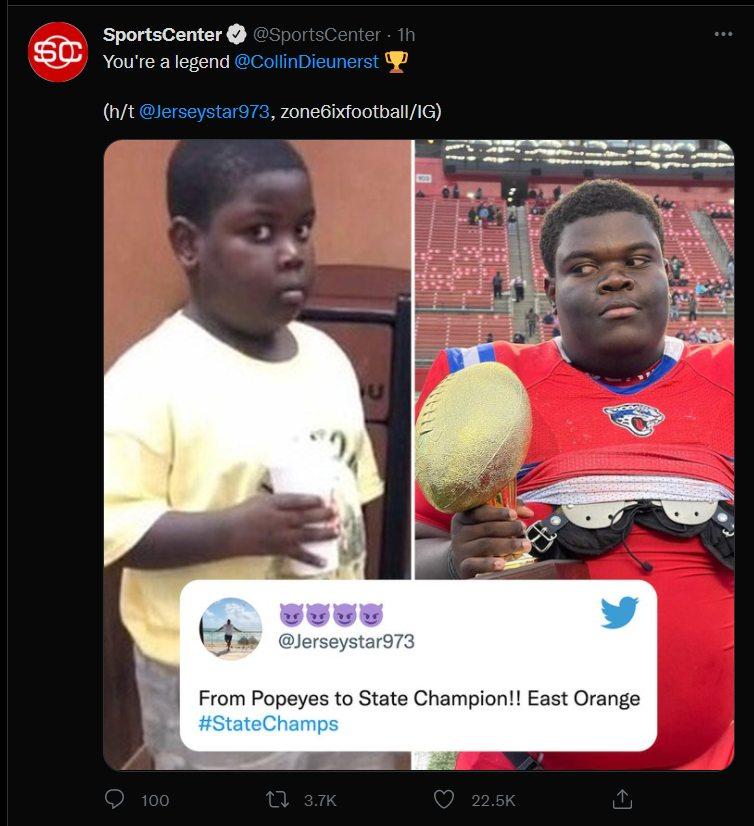 Overtime tweets the video highlights of the game. The post is captioned, "Fumbled at the goal line and returned 100 yards in 3OT for the STATE TITLE."

Fumbled at the goal line and returned 100 yards in 3OT for the STATE TITLE 🤯(via @KDJmedia1) pic.twitter.com/UeZjXE64lg

The football win turned viral when a follow-up tweet came out saying, "From Popeyes to State Champion!! East Orange State Champs." At the time of writing, the tweet has gained 15,000 plus retweets, 1,838 quote tweets, and 107,700 plus likes.

Although it is not directly confirmed, the post is suspected to come directly from Collin. The picture in the tweet is definitely showing an older and mature man who resembles the young kid on the meme.

Even more exciting, Popeyes replied to the tweet reveal, claiming in some of the glory with the comment "We tend to attract greatness."

We tend to attract greatness 😌

To conclude the exciting revelation, the player asked Popeyes to sponsor the championship parade. Unfortunately, the fast-food company has yet to reply.

Other Viral News on the Internet

On a different topic, fans might be interested in other sports news on the internet. One exciting update is about Tom Brady's ongoing NFT sales on the digital marketspace Autograph.

Autograph is starting its Tom Brady Origin Collection early access period this week. It will be selling unique digital collectibles and giving away a free Immortal Statue digital token to interested fans.

However, there is a twist. To fully enjoy the event, fans have to collect certain digital tokens during the event. The event only runs from Tuesday until December 28. Afterward, players might forever lose their chance of getting the rare collectible.

Full details on this NFT sale and how to join it is available in this article.

Tags:  how do you turn on a itech sport fitness tracker

Wi-Fi or 4G not working: How to fix internet problems on iPhone