The Surface Earbuds sparked some controversy when they were first announced. The design of the buds along with the high price tag made them look not very competitive in the TWS segment. With a new price and some official specs, these earbuds finally look like a good competitor in the TWS marketplace.

The Surface Earbuds have a very distinct design. In your ear, they look like big white plates. The case is a white case with a flip-up lid, of course. The case itself has a few ways to charge it. It has a USB-C port on the back along with wireless charging support. The battery life on the buds is also impressive. The earbuds have up to 8 hours on a single charge and the case stores 2 full charges for the buds, which should be close to 24 hours of battery.

Microsoft decided to launch these earbuds without active noise canceling. They say it’s because there are times you’ll want to listen to music or talk on the phone without fully shutting out the world. While there is some logic to this, ANC would have been a nice option. Microsoft also has added integration with both Microsoft 365 and Spotify. You will be able to use the Surface Earbuds for dictation in Word, Outlook, and Powerpoint. You can also triple-tap the touchpad on the side of the earbud to activate Spotify. On iOS, you’ll also be able to use the Outlook app to have your emails read out to you as you receive them. 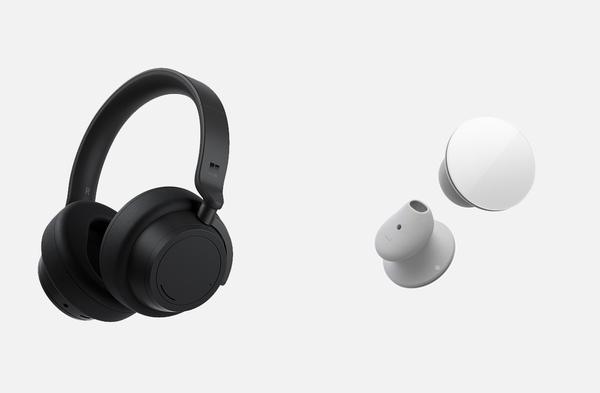 The sides of the earbuds are touchpads. You can tap or use different gestures to control volume, your phone’s assistant, calendar events, phone calls, and more. These will be customization through the Surface Audio app.

When Microsoft first announced these earbuds, they also announced the $250 price tag. With the official launch today, Microsoft is lowering that price tag to $199. They will be available starting April 12th. Pre-orders will start today.

The battery and sound quality are the only two improvements to the actual earbuds. They still have the same design and practically the same specs. The interesting part of the Surface Headphones 2 design is the dials. Both ear cups have a dial that you can turn to either control the volume or the ANC level. There are 13 levels of noise cancellation you can easily switch through. You can customize the headphones and related features in the Surface Audio app. Fortunately, Microsoft decided to include AptX audio codec for low latency audio. AptX advertises latency as low as 40ms in some cases,

Some of the software additions Microsoft implemented into the headphones are great as well. If you have Swift Pair enabled on your Windows 10 PC, it makes the pairing process super simple. As soon as you turn them on, you’ll get a notification asking if you want to pair them. Along with Swift Pair, Microsoft has full Microsoft 365 integration. You can use dictation in Word, Outlook, and PowerPoint, and in PowerPoint, you’ll have access to live captions and on-screen subtitles with translation into one of 60+ languages. Play My Email will also read your calendar events and emails from the iOS app.

The battery life has improved as well, as per Microsoft’s claims. It goes from about 13-15 hours to up to 20 hours with ANC and Bluetooth. Along with that, Microsoft added fast charging. Five minutes of charging gives you almost an hour of listening time. This is crazy good for headphones.

As an owner of the original Surface Headphones, I’m really excited about these new headphones. The audio quality improvements and battery life are really going to help make the product feel more well rounded. The new color also helps it look sleeker and more like something I would want to use on a regular basis.