Location
Home → Article → The Apple Watch can tell if you wipe out while biking or running. Here’s how.

An inside look at their new workout safety feature, which can notice if you fall during any Watch workout.

If you fall while cycling—or doing any other workout—the Apple Watch could call for help automatically.AppleSHARE

A cyclist or runner who heads out for a solo workout and then takes a bad spill could discover that their Apple Watch has automatically called for help, now that Apple has pushed out a software update to its wearable. The new software version, watchOS 8.1, dropped recently, and it includes their new fall detection during workouts feature that the company first announced in September.

The option works with a range of physical activities beyond cycling and running—in fact, it’s designed to detect falls for any type of workout an athlete might select on the watch, from a walk to rock climbing to even water sports.

To equip the watch to do this, Apple needed reams of real-world data to first learn how to recognize falls during a workout. After all, a mountain biker taking a jump and then landing back down hard on the trail will create a force that the watch can pick up, but obviously isn’t representative of a fall.

Here’s what to know about how it all works.

Apple first rolled out a general fall detection feature in 2018. At the time, it was automatically turned on for people 65 and older, and the company has subsequently lowered that age to 55. But a fall that someone might take while in a domestic environment is different from the type of spill an athlete might take while running, for example. Plus, if a basketball player tumbles during a game but then is back on their feet in a moment, they’ve had a fall that the watch can probably ignore.

“Our goal here is to tease out the falls that actually do matter, where you’re getting injured,” says Ron Huang, Apple’s vice president of sensing and connectivity. “Versus just the routine sports falls that you take.” Another force-causing action the watch can ignore: smacking your hand against a volleyball during a game.

To get data to train their software, Apple needed what Huang describes as “true falls”—not a tumble simulated by a stuntman, for example. For that, they turned to the Apple Heart & Movement Study. That ongoing research project, Huang says, gave the company access to information from more than 150,000 people, more than 1.3 million workout sessions, hundreds of thousands of hours of workout data, and thousands of actual falls.

It was a “vast amount of data,” Huang says, that helped ensure they included a “wide variety” of different people—with different skill levels and the like—who were doing workouts. (The fact that this Apple Watch feature was made possible in part from people who had opted into participating in the study is a reminder that this research from Apple, which it is carrying out in partnership with American Heart Association and Brigham and Women’s Hospital, can help the company develop features for its gadgets; as an FAQ from the study states, “Study data may be used for health-related product development and improvement.”) 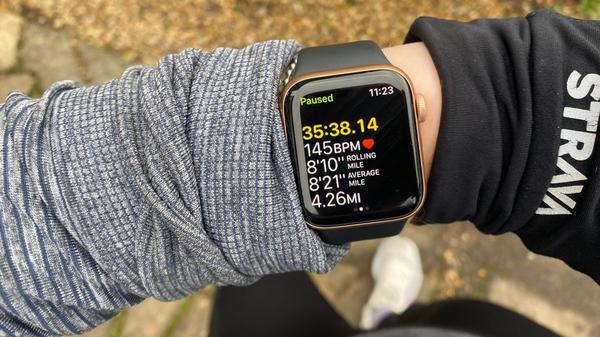 “Many thousands of these users actually told us via questionnaires that they took a fall,” Huang says. “And many of these [people] even took a phone call from us, so with their permission, we were able to reach out, and talk live, and get even more context around the fall.”

The key here is matching an actual fall with what the accelerometer and gyroscope on the watch detected during that tumble. “We’re able to tie this back to the raw sensor data that they also opted in to share with Apple,” Huang says.

What the sensors see

The sensors inside the wearable that matter for this type of detection are the accelerometer and gyroscope—the first detects changes in motion, and the second records rate of rotation on the X, Y, and Z axis. For example, if the watch is on your wrist and you hold it parallel to the floor in front of you, then rotate it towards you so that you can better see the screen, it is rotating along its X axis.

These sensors will reveal data that is full of chaos during an actual fall, versus clearer information from an impact that is not a fall.

For example, a “controlled jump” on a mountain bike will reveal “highly directional” sensor data “on a single axis,” Huang says. Imagine that your hand stayed on the handlebar grip, and that when the bike tires smacked the ground after the jump, your watch detected an impact. That’s not a fall. A true fall reveals itself in the sensor data in a much different way. “If you’re actually falling, it’s a very chaotic motion that we can see from the accelerometer and the gyroscope,” Huang says. “During a fall, you see very quick, and just large and messy [gyroscope-detected] rotations happening.” If you’ve ever taken a tumble like this, you can imagine what the watch is noticing.

“In our algorithm discussions, we [frequently] talk about entropy,” Huang adds, as a way to describe that messiness of data they see from a fall.

GPS offers another clue, because a cyclist who is still moving after a jump has likely not wiped out, whereas a stationary watch after the messy sensor data of a true fall is a signal that someone could be hurt, because they are lying down and not moving.

With cycling specifically, Huang says that they have tens of thousands of workouts from which to glean data.

This isn’t the first time a company has released a feature to detect a fall for a cyclist. For example, bike company Specialized developed ANGi, a small sensor that attaches to a helmet, pairs with your phone, and can notify your emergency contacts if it thinks you’ve fallen.

It’s easy to see how fall detection could come in handy for a sport like cycling, but not all workouts are likely to lead to a fall. Could you fall while swimming or paddling? Or if you’re bouldering—a form of rock climbing where you stay low to the ground and don’t use ropes—it’s normal to fall on a mat, but then get back up quickly again.

Instead of only having the feature work for only some activities, Huang says that they decided to take a simple approach and “have it supported for all different workout types” regardless of whether or not a fall is likely. Plus, it’s possible to imagine a scenario where someone falls hard on a pool deck, for instance, after a swim, while they still have the workout mode switched on. So yes, if you’re paddling in a canoe and you have that workout mode engaged, your Apple Watch is looking to see if you fall.

Apple says that new Apple Watch users will have this feature automatically turned on when they set it up. For existing users, you’ll need to turn it on manually. One way to do that is by going to the Settings app on the watch itself, then the SOS field, then Fall Detection. From there, you can choose to have the feature off entirely, on all the time, or on just for workouts. You don’t need the latest watch to use it—it works on Series 4 watches and newer—but you do need to be running watchOS 8.1.

Ultimately, whether a new software feature is irritating, helpful, or even life-saving depends on how well it is executed. An athlete whose wearable constantly thinks they’ve taken a fall during routine play when they haven’t actually seriously tumbled may just switch off the feature; false positives will be irksome. Evidence of the feature’s utility will be felt in the years to come.

Rob Verger is the Technology Editor at Popular Science, where he leads a team of journalists who cover everything from artificial intelligence, cryptocurrency, and cybersecurity to privacy, security, and the military. Contact the author here.

The pandemic’s toll:Lives lost in California

The richest Fortnite players from the Twitch data leak