The interesting thing about the Xiaomi Mi Band 5 and the Amazfit Band 5 is that they’re made by the same company.

While Huami owns Amazfit, it also has a manufacturing partnership with Xiaomi – and that means there can be crossover from what we see from the two (separate) companies.

The Xiaomi Mi Band 5 launched in June in China, before rolling out globally a month later. While the changes weren’t as radical as the Mi Band 4, it's still one of the best budget fitness trackers out there.

Then came along the Amazfit Band 5, with a familiar design but a big set of features.

How do the two bands match up against each other and what do you gain or lose by going Xiaomi or Amazfit? We take a look at the specs sheets to find out.

So you’d probably expect us to tell you that the battery life on these bands are identical, given how similar they are in feature sets. Well, that’s almost the case.

So the Amazfit promises a little more despite the additional features. When it comes to recharging, they both need a couple of hours plugged into the magnetic cable to get from 0-100%.

Price is definitely going to be a factor in choosing between these two. Though given both are very much budget purchases, there’s not a huge amount of difference in how much you’re going to pay.

On the one hand, you have the Mi Band 5, which is priced at $49.99. The Amazfit in comparison costs $49.99. That is a very small price difference between the two bands.

Amazfit Band 5The Mi Band 5 looks exactly like the Amazfit Band 5. As we mentioned, these are trackers made by the same company albeit at different price points.

So you’re getting the same 12.4mm thickness polycarbonate design with a TPU plastic strap that holds in place a1.1" full color AMOLED touchscreen display with a 126 x 294 resolution. There's also a capacitive button that sits below the screen.

They’re both slapped with a 5 ATM waterproof rating, making them safe for pool swimming up to 50 metres and showering with it on.

They come with the same style charging cable, which means you don’t need to pop out the tracker part to power it up when it hits 0%. 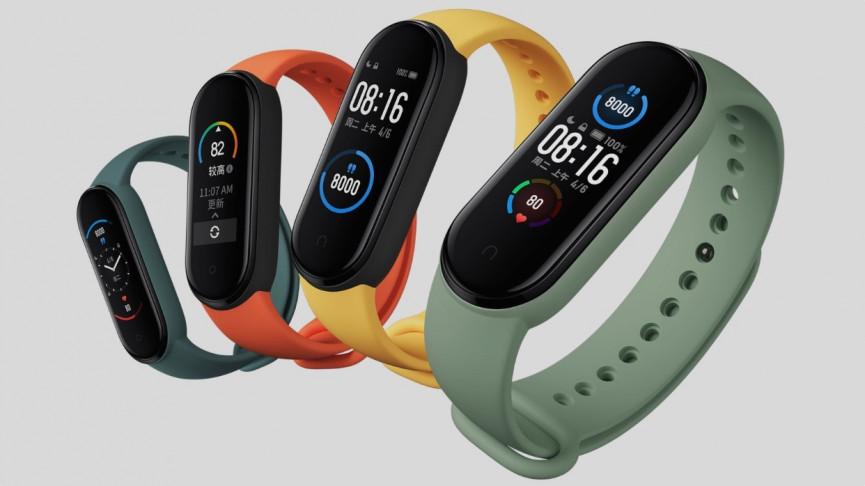 So what is actually different? The Amazfit Band has a slightly larger case, but in essence should feel similar on your wrist.

So, if you want the band with more colour options, go for the Mi Band. If you like the idea of a slightly larger tracker, it’s the Amazfit for you. Ultimately though, these are pretty much identical.

So what are these Bands capable of doing? Again, we are going to sound like a broken record, but there’s a lot of features these trackers share.

On the sensor front, they both include six-axis motion sensors to track activities and enable sleep monitoring and track naps.

There’s optical heart rate monitors to track heart rate during exercise and continuously. They also unlock PAI health assessment scores and stress tracking. Though it looks like the Amazfit has a superior BioTracker sensor, to deliver improved heart rate accuracy.

You’re also getting women’s health tracking and breathing exercises on both devices.

The major difference between the two here is that the Amazfit has an SpO2 sensor that's capable of measuring blood oxygen levels for that extra insight into your current state of fitness. It’s not used to diagnose serious health issues.

If that’s a sensor and metric that matters to you and you prefer a more advanced heart rate monitor, the Amazfit Band 5 is the one that can delivers those.

Smartwatch features are level pegged too with both using the Zepp companion phone app on either Android and iOS devices.

That means you can view notifications, control music playback, get calendar and event reminders, see weather forecasts and remotely control your phone camera.

You’ll also a host of watch faces to choose from including the ability to upload your own pictures and customise a small number of those faces.

One big extra you get on the Amazfit Band is Amazon’s Alexa built-in, which means you can ask it questions, set alarms and timers, make shopping lists and control smart home devices.

It’s clear if you value or like the idea of having a smart assistant to talk to like you can on an Apple Watch or a Fitbit smartwatch, the Amazfit Band is the one that’s going to have more appeal.

It feels like it’s pretty much a no brainer as to which budget band you should be going for. From a design point of view, you basically cannot separate them. Yes, you get more band colours on the Mi Band, but everything else is the same as the Amazfit Band.

The Amazfit has the extra SpO2 sensor and Amazon Alexa and promises a day more in battery life than the Mi Band 5. There’s doesn’t seem to be a huge reason to spend just a little less on the Mi Band, when just spending a little more will get you some pretty big features.

The Amazfit Band 5 feels like the tracker that the Mi Band 5 should've been. While we wait to get testing the former, it feels like it's going to be the budget tracker to go for.