When I started playing games in VR, I had no expectation of getting into shape. During the first Friday evening that I owned my Oculus Rift—filled with excitement—I dove head-first into SUPERHOT VR. And as I was smashing SUPERHOT’s idyllic orange baddies, something occurred to me. I’d started sweating. I pulled my headset off and checked the activity log on my Apple Watch. I had burnt 300 calories in the past hour. My heart rate was averaging 140 BPM.

Since then, I’ve been mindful of my daily activity. With the activity log on my fitness tracker, I know what kind of workout each of my games provides me. I even collect data that tells me how my metabolism changes with my body weight. This then helps me decide when it’s time to start changing my workout plan, add or remove certain games, or raise the difficulty levels in my favorite games. Each day, I walk or jog about 3 miles in addition to my VR workout—which is recorded in my activity log, where I use that data as a baseline for whatever I do in VR that day.

How does this apply to you, then? Not only can a good fitness tracker help you plan your week around data you’ve collected about your games, but you can use that data to motivate and push yourself to your fitness goal like I’ve started doing. The best part of your fitness tracker is that you can ideally use it to record any physical activity. Now that you understand the importance of having a fitness tracker while you play in VR, how do you get started picking the best one for you?

In this article, you will get a decent selection of fitness trackers based on a few key criteria. Keep in mind: Because VR is a stationary exercise, you don’t need a GPS or a pedometer on your device. Preferably, you want a tracker that excels at activity tracking and heart rate tracking. I am also not including the Apple Watch on this list, because it categorically does so much more than track your fitness. Let’s begin:

Coming in at a whopping $29.98 on Amazon, the LETSCOM ID130PlusHR includes everything that you need to get started.

Besides monitoring your heart rate and calorie burn, you’re also getting automatic sleep tracking and live notifications from your phone. Among the core features, it comes with: 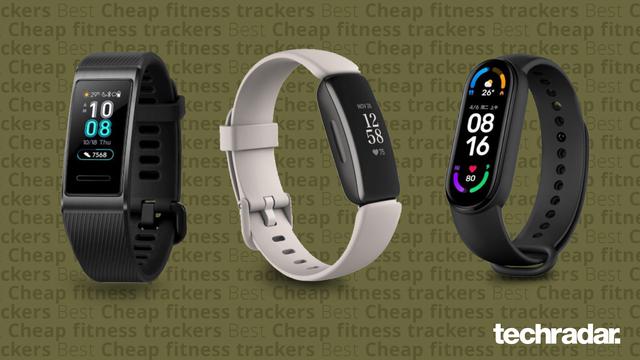 One user has stated that the battery cycle lasted over 8 days in a single cycle, without the charge dropping below 18%. As far as the waterproof rating goes—IP67—you can get away with taking it near water. But I’d recommend against swimming or submerging into the water while wearing this device.

The Wahoo TICKR X is known for both its flexibility and its accuracy. The battery life is reported to last for about 12 months per charge, which is generally on the lower side for HRMs, but still very good for a device you’ll use often. You can sync it with up to 50+ apps on your iPhone or Android device, including Nike+ Run Club and Strava. While it doesn’t come with a GPS under the hood, it works with Bluetooth 4.0 and ANT+. This makes it able to draw GPS information from other devices such as GPS watches, smartphones, and tablets. It even allows you to do both at the same time.

If you have another ANT+ enabled device—like a running watch—you can have your watch display your TICKR X’s readout while the device is also syncing to your smartphone. The TICKR X doesn’t even need you to have your phone or tablet available while you use it. It contains built-in memory that can sync with your connected smart devices whenever you’d like.

Unlike the regular TICKR (not the X edition), the TICKR X is both waterproof and sweatproof—submersible up to 5 ft of liquid. Keep in mind: One major complaint that seems to come up often in user reviews is related to a glitch that appears to hurt the experience of TICKR X’s companion app on Android devices. This issue can be sidestepped by using one of the other compatible apps. I recommend starting with Nike+ Run Club.

The Fitbit Charge 2 is claimed to currently be the most accurate activity tracking watch on the market, according to some of its most ardently supportive Amazon reviews, with a proprietary heart tracking feature called PurePulse continuous tracking. Throughout the day, the Fitbit Charge 2 will detect your calorie burn, as well as your heart rate, movement, and breathing patterns. It will even notify you when it detects a need for guided breathing sessions. The OLED display also shows you notifications for texts, calls and calendar notifications. While you sleep, it will track your movements and give insights into how to improve your sleep regimen.

Unlike the TICKR X, the Fitbit Charge 2’s companion app is one of the features that fans of the device love to use. You can also connect it to any fitness app that is available for your iOS, Windows 10 or Android-based smartphone. As a device that you’ll be wanting to use each day while you’re out of the house, you’ll enjoy the Fitbit Charge 2’s battery life—5 days of charge per cycle. It’s also reportedly one of the most comfortable wrist-mounted fitness trackers on the market, with interchangeable bands that can be purchased online.

While it doesn’t have a built-in GPS, it does display info from your phone’s GPS on-screen. One thing that you won’t get with the Fitbit Charge 2 is the freedom of taking it near water. It will resist the sweat from your workout, but it is not built to be waterproof and may not survive any amount of submersion.

For what the Fitbit Charge 2 is (an all-in-one fitness tracker), it’s important that you get the heart rate tracking done right. Remember: That’s where most of the data about caloric burn will be coming from. The Fitbit Charge 2 has earned my Best-in-Class recommendation because of the PurePulse heart rate tracking that I mentioned earlier. It measures your blood flow to get as close to the accuracy of a dedicated HRM as possible.

If you don’t track your VR workouts, it’s going to be tough to figure out how much of a workout you’re getting from VR. Sometimes, seeing the results of one workout can be enough to motivate you to push to the next workout. When you work out, you always want to be pushing towards a goal. And the difference between motivating yourself to complete workouts each day, and giving up altogether, is tracking your fitness results and seeing the data.

What’s the point of playing a game if there’s no score or objectives? Working out can feel exactly the same way. And that’s where a great fitness tracker can save the day. Now, hopefully, you have a few options to play with. You can go with a budget fitness tracker, a dedicated heart rate monitor, or a nice all-in-one tracking watch. Remember not to worry about a built-in GPS, pedometer, or even waterproofing—unless you also plan on using your fitness tracker outdoors.

How will you track your daily fitness results? Let us know in the comments.

Tags:  how do i charge my letscom fitness tracker

Google and Samsung unite to reboot Android watches, with a dose of Fitbit too

The best MacBook Pro accessories in 2022