Location
Home → Article → Google and Samsung unite to reboot Android watches, with a dose of Fitbit too

Were you considering buying a smartwatch for your Android phone? Hold off until the fall. Google and Samsung have announced a partnership to redesign Google's Wear OS for watches, and Samsung's future Galaxy watches will run on this new software. Also, Fitbit is making a Wear OS app, and will have its own watch too. The news broke at this year's Google I/O developer conference on Tuesday.

Sound like a lot? It is. The possibility of Samsung's watches moving to Google's software has been expected, and Fitbit's already a part of Google. But Samsung and Fitbit collaborating with Google sounds like a Justice League of wearable tech, and suggests a lot of changes in the Android watch landscape to go head-to-head against the Apple Watch. New watches built with this new software are coming in the fall, and right now it's hard to determine what exactly it could add up to.

I spoke with Google, plus representatives from Fitbit and Samsung, to break it all down and understand what's happening. Bottom line: Samsung looks like it's going to be making what looks to be the go-to Android watch later this year, and Fitbit will follow after that. And eventually, Samsung's watches may end up getting all those Fitbit features too.

Google and Samsung are making a new wearable platform

Samsung's partnership with Google looks to be extensive. The two companies are co-designing not just the next version of WearOS, but also its technical capabilities, including fitness sensor support and future chipsets for smartwatches.

"We're seeing apps start up to 30% faster, and the performance is allowing us to add animations and transitions that are super smooth that we didn't have before, all of this powered on the latest chipsets," Bjorn Kilburn, director of product management for Google Wear, said on a Google Hangout call.

These next-generation watches will be more cellular-ready, have better battery life, and also look like they'll have more fitness and health features. Odds are that the platform will parallel what Samsung's already been building up on its recent Galaxy Watch Active wearables. 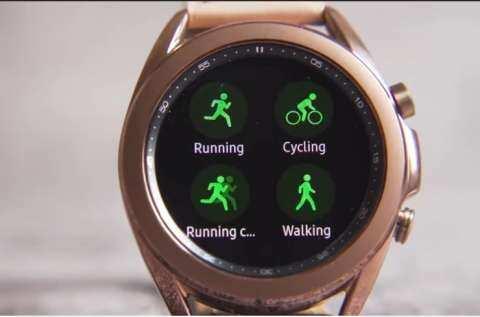 Google's apps for Wear OS are also getting updates. A new Google Maps will work without a phone on the new Wear OS watches. YouTube Music is getting an offline music mode for watches, and so is Spotify.

The partnership also looks like it could once again open up electronics partners to make Wear OS watches. "It will enable the entire Android ecosystem of device-makers to bring their cutting edge hardware and software experiences to the wearable space like Android has done for phones," Kilburn said. That suggests that other Android phone OEMs that used to be active in the Wear OS space could end up coming back.

Kilburn didn't confirm what chipsets these watches will have, though. "We're very focused on using the latest chipsets for wearables. And a lot of the choices around what chipsets are actually used will be down to The OEM's choice," he said. Also, not all Wear OS watches may make the leap to these next-gen and more premium-sounding features and software. "Whether those existing devices get upgraded or not, will be a function of a few different things. It will depend on whether the hardware itself can support the upgrade, and it will be a function of whether the OEM chooses to do the upgrade," said Kilburn.

Samsung's next watches will all run Google software

Samsung's next Galaxy watches going forward will all run this new version of Google Wear OS, confirming a rumor that had been speculated on for months. These watches will all use the Google Play store for apps, but Samsung's apps will also be making the transition to the new OS. According to Google, Samsung's watch-face creation tool will be part of the new Wear OS. And according to Samsung, "Select apps and services on the Galaxy Stores will be available through the Google Play Store on the new unified platform."

According to Samsung, the next Galaxy watch with Wear OS will still have its rotating bezel design, and have enhanced battery life and more accurate health and fitness tracking. "Future Galaxy Watch devices will be based on the new, co-created unified platform," said Samsung in a statement to CNET. "In addition to the new unified platform, Samsung will continue to offer the great experiences that consumers loved on previous Galaxy smartwatches, such as the rotating bezel UX."

But existing Samsung Galaxy watches, like the recent Galaxy Active 3, won't get the new Google-based software. "The new unified platform is not updatable on existing Galaxy smartwatches," Samsung confirmed in a statement. Existing Samsung watches will get software support for up to three years, but not on the new Wear OS.

This also means the end of the road for Samsung's S-Health, although Samsung will allow S-Health data to be exported over into Google's Fit app. "Beloved Samsung services like Samsung Health will continue to be core to the Galaxy experience and available on Galaxy smartwatches. For the users who have enjoyed Samsung Health service, the service will continue on the new unified platform and data is exportable to the new unified platform. Samsung Health is not part of the new platform," Samsung confirmed via email.

Fitbit, acquired by Google in a deal that was finalized earlier this year, was always expected to fold into Google's smartwatches eventually. Google's now announced the first step in the process, which will involve Fitbit apps appearing on Wear OS later this year.

Fitbit's also going to be working on its own Wear OS watch, using the same blueprint for more advanced chips and the Samsung-Google OS design, but that watch likely won't arrive until next year. It's expected to be more advanced, with features that could be a step above Fitbit's current premium device, the Fitbit Sense. It will likely also include things like cellular support and Google's entire app ecosystem.

But in Fitbit's case, the app that will be on Wear OS will slowly trickle features in. This year, it will mainly focus on snapshots of activity via a "Today" tile, plus have fitness-goal celebrations and exercise modes. It won't tap into heart rate or sleep tracking, though. For that you'll still need to buy one of Fitbit's existing fitness trackers.

Google Fit and Fitbit's heath platforms aren't merging yet, either. Fit and Fitbit will exist as separate apps, and there's no word yet on whether data will be able to be imported or transferred between the two. But it sounds like the beginning of Fitbit's shift to playing a bigger part in Google's ecosystem, which Fitbit co-founder Eric Friedman hinted at earlier this year.

Picking a smartwatch for Android phones has never been easy. Google's Wear OS aimed to become Android for watches years ago, but in reality the landscape has fragmented with Samsung's Galaxy watches, plus Fitbit, Garmin and other fitness watches all having their own OS and apps. But that seems to be changing now.

Samsung partnered with Google on one of its first Android Wear watches in 2014, the Gear Live. But this new partnership looks a lot deeper, and even more hardware-focused. Maybe this is the next step towards the long-dreamed-of Pixel watch that never happened. In a sense, Samsung's Galaxy watches are going to turn into that next-gen Pixel watch platform after all.

Which Budget Fitness Tracker Is Best For VR Workouts?