There’s value in knowing information about your health. If you’re trying to get in shape, knowing your current resting heart rate can tell you a lot about your existing level of cardiovascular health. Your heart rate also tells you a lot about how effective your workout is for burning fat, building endurance, and more. Your Pulse Ox gives an estimation of the oxygen saturation level in your blood, while your Respiration gives you an average of how much you breathe from minute to minute.

The Garmin Epix 2nd Gen tells me all this information and more. All I have to do is wear it. It’s one of the smartest fitness watches I’ve ever worn. With a few tweaks and improvements, it could be the single best smartwatch I’ve ever used. The Garmin Epix is designed for serious athletes, but it also carries a serious price point.

More health information than I can shake a stick at

The main purpose of the Garmin Epix is to tell you everything about your personal health and fitness. It provides a ridiculous amount of information — in fact, more information than I can really use. For instance, it includes tracking information about diving and even golf — two sports I’ve never participated in.

All of the information is available on the Garmin Epix itself (called “Glances”), but you can see a more detailed breakdown on your phone through the app. The “My Day Card” shows you information like what I detailed before, but you can add or remove data that you aren’t interested in seeing. All of the options include:

All of that information is beginning to make this review feel more like a guide, but it’s necessary to explain some of the quibbles I have with the device. The heart rate tracker is spot-on; I measured it against several other trackers I have and found it to be within one beat every time.

It provides a ridiculous amount of information.

The Body Battery is an interesting feature. You aren’t going to drop when your score is low (and in fact, I don’t think it can hit zero — mine only went to five at the lowest.) You will definitely feel tired with a lower body battery score, though.

Most of the metrics are accurate, or at least within reason. I’ve used the Garmin Epix for a bit over two weeks now and have had few complaints. The only two that stand out are the Stress and Sleep measurements.

The Stress measurement doesn’t feel accurate in the slightest. It’s based on your heart rate, so while exercising or exerting yourself, your stress level might be high. The watch told me I was under high amounts of stress when resting on the couch one night watching TV. Considering I was half-asleep at the time, I have to respectfully disagree.

The Sleep measurement is accurate, but not a great reflection of your actual energy levels. Lower amounts of sleep should translate to lower energy levels, but there were several nights where it showed less than five hours of sleep where I woke up and felt great. I noticed that the sleep measurement stops if you are awake for too long at any given time, so it might register less sleep than I actually had.

All of the above metrics are available at a glance, but the Garmin Epix provides more detailed health information for those that want it. For example, it provides users with a Fitness Age estimate that compares your actual age to your body’s level of fitness.

I’m 32, but it says my fitness age is 30. By increasing the amount of exercise I get each week, the watch says I could reduce that to the fitness level of a 26-year-old.

You can measure your Lactate Threshold and HRV Stress levels through the use of the Epix, paired with a Garmin chest heart rate monitor. This isn’t included with the Epix and requires a separate purchase. Garmin offers multiple heart rate monitors, some of which are designed to be used by swimmers while others are for cyclists and runners.

Again, this isn’t vital for normal day-to-day operation of the Epix — but serious athletes will appreciate the feature.

A crazy number of training options

The Garmin Epix really is a jack-of-all-trades kind of smartwatch. Cyclists can measure their functional threshold power, VO2 Max, and more. Golfers can download golf courses to have easy access to a map, and even track their scores through the Epix. Another app called Garmin Dive can be downloaded to log your dives, manage your gear, check out maps, and more. 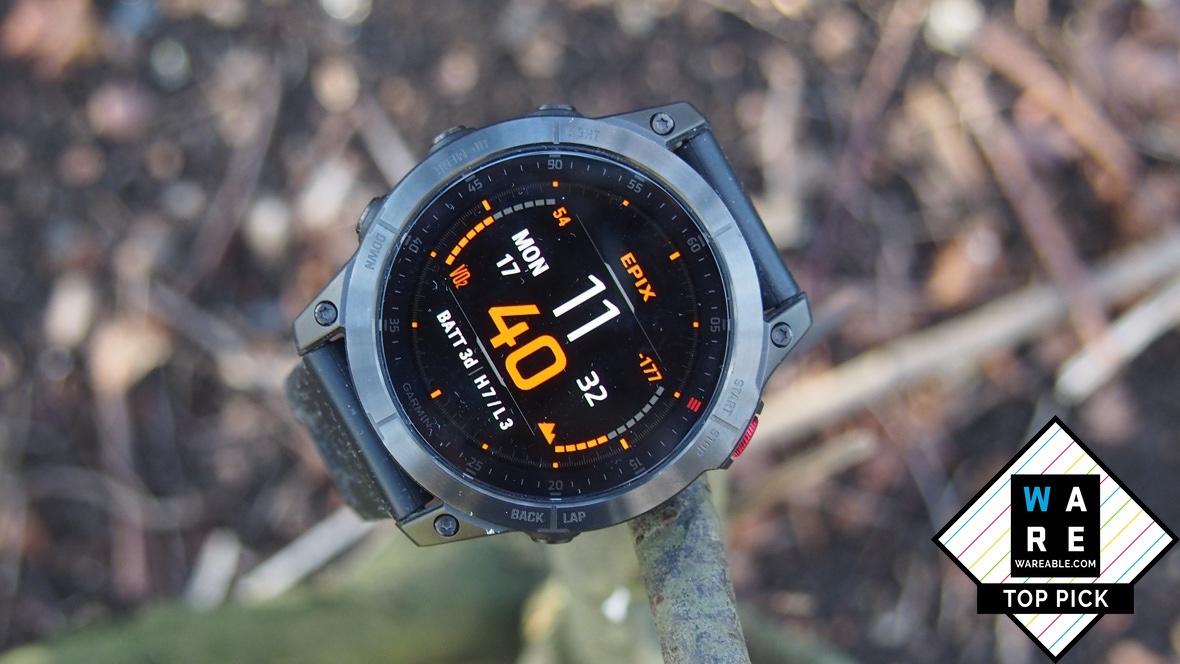 If you’re training for a run, the PacePro Pacing Strategies can help you build up your stamina and technique at a safe, steady pace. Regardless of what kind of athlete you are, there’s something in the Garmin app for you.

The Garmin Epix really is a jack-of-all-trades kind of smartwatch.

If you are a distance runner and want to stay safe while on a long trail, you can set up LiveTrack, a feature that lets friends and family know your location and status while on the trail. The Garmin Epix has incidence detection and will alert your emergency contact if something happens. It even sends your GPS location so that someone can find you. If you have an Android phone (the feature isn’t available for iOS users), you can use GroupTrack to see where all of your connections are in real time.

Even if you just want a way to keep yourself fit without going all out, Weekly, Monthly, and Yearly challenges give you a community to compete against. Some of the challenges include walking one mile per day for 365 days, cycling 250 kilometers in a single month, and more.

A lot of customization, but not a lot of variety

There’s a lot you can do with your Garmin Epix from an aesthetic perspective. The face can be customized by downloading a secondary app called ConnectIQ from the App Store or the Google Play Store.

ConnectIQ lets you browse dozens of different faces for Garmin smartwatches. Because it’s the catch-all app, not every face is compatible with every watch — but I rarely encountered any that wouldn’t work with the Epix. The biggest problem is that many of these faces are custom-made and will ask you to make a donation through PayPal; if you don’t, the face will constantly change and pester you for money.

There are a lot of completely free options, though. I settled on one that shows a huge amount of information, including the current weather, sunrise and sunset times, heart rate, stair count, step count, and more. The only issue I’ve encountered with it so far is that the temperature often isn’t accurate.

ConnectIQ also lets you create custom watch faces through its Face It tab. If you’re the type that prefers to make something completely your own, it’s worth checking out. I didn’t have much luck, but then again, my artistic talents stop at Paint By Number books.

There are a lot of faces to choose from, but I found many of them to be so similar that they made little difference. The Garmin Epix is a training tool, after all — even its physical design is sporty. It won’t pair well with a blazer and cufflinks, so don’t worry about finding a formal dinner-worthy watch face.

The Epix isn’t the first Garmin smartwatch I’ve tested, but it’s by far the best.

There are also other training apps available through ConnectIQ, but not all are created equally. Many are community-made, and these apps can be hit or miss. Pay close attention to the rating score for each app. Some, like the Hydration Tracking app from Garmin, only scored 1.5 stars out of 5, while the Wikiloc Trails app had a 4 out of 5 from well over 1,000 users.

The Epix has some epic features

The Epix isn’t the first Garmin smartwatch I’ve tested, but it’s by far the best. It has a couple of features I haven’t seen before; for example, it has a built-in altimeter and compass. It’s not a feature I expected to use much, but I’ve found myself pulling up the compass on more than one occasion.

The built-in stopwatch is also tremendously useful, although I’ll admit I’ve used it for cooking more than training. The Epix is easy to navigate and has become so much a part of my daily wear that I feel strange when it isn’t on my wrist.

The Garmin Epix can get up to 16 days of battery life in smartwatch mode, but I found it closer to five to six with the always-on screen. Charging takes only a few hours. I find I rarely go without wearing the Epix now. It’s waterproof, so you can shower with it (although I still can’t bring myself to shower with a smartwatch after years of keeping water far from electronics.)

You can link your Garmin account to Facebook, Google, and your phone’s contacts to find other Garmin users you know. You can share data and compete against them to add a more social aspect to your training — something that’s particularly nice to have in a time when many people are still avoiding the gym.

If none of your friends use Garmin, you can search for public groups to join. Some are location-based, but others are generalized groups that anyone can take part in. I found several for tennis and baseball. There are even groups for ultimate frisbee.

The Garmin Epix is a truly incredible smart fitness watch with only a few minor flaws. Just having it on my wrist has kept me more aware of my activity levels throughout the day, and watching the numbers improve (along with the friendly community) keeps me motivated to continue working out.

The Garmin Epix combines the best features of other Garmin models into the ultimate fitness watch. It’s hard to compete against, but there are a few options if you’re willing to sacrifice features. The Garmin Venu 2 is a more-affordable $400 but lacks many of the advanced tools the Epix has.

The Apple Watch Series 7 has a lot of fitness features but is more smartwatch than fitness tracker. If you want to be able to answer messages or make calls through your smartwatch, you’ll need something like the Series 7 — the Epix doesn’t have that functionality.

The Garmin Epix is built like a tank. It’s comfortable, but definitely has a bit of weight to it. The screen is scratch-resistant and capable of withstanding a beating, and it’s waterproof up to 10 meters. I expect it to last for years to come, but if something happens, Garmin offers a one-year limited warranty.

Yes — if you’re a serious athlete in need of an outstanding fitness watch capable of providing a slew of information. If you’re just starting out on your fitness journey, consider a more affordable alternative. The $900 price point is steep for a fitness tracker that doesn’t have full smartwatch features.

Tags:  how to connect fitness watch to iphone

FitBark 2 review: Can a doggy fitness tracker help your best friend get healthy?