Location
Home → smart wristband → Don’t have $500 to spend on a top-of-the-line smartwatch and earbuds? This duo is just $64 combined – and impressive for the price

It seems like everyone is walking around with super pricey smartwatches and wireless earbuds from a company that rhymes with Snapple.

But what if your needs — and budget — are a bit on the smaller side? Recently, I checked out two offerings from a budget fitness tech company named Letsfit. You’ve probably never heard of them, and neither had I until they got in touch about a review.

I was intrigued by their tiny price tags and thousands of positive reviews on Amazon. I tested two of their top selling products: the $36 Letsfit ID205L smartwatch and the $28 Letsfit T13 wireless earbuds.

As a rule, I rarely test earbuds unless there is a particular reason to do so. That means trying out the latest AirPods and Galaxy Buds to see how they perform (and stay in my ears) but after that, there are just too many out there.

But I was curious about a pair of $28 earbuds with thousands of positive reviews on Amazon. In fact, you won’t find Letsfit sold anywhere else. They make their entire business on Amazon.

The earbuds come in a charging case and they made an immediate good impression on me since the case uses the latest USB-C style charging cable. That’s a good sign.

Connecting the buds with my phone and iPad was simple and they fit nicely in my ears. The better part is that they stayed in my ears — which I can’t say for many wireless buds.

They’re also sweat resistant and rated at 6 hours of playback on a charge.

After taking them on a few runs and on the spin bike, I’m impressed. The audio quality is perfectly fine for my ears and they worked as advertised. There is a built in mic so you can even take calls.

There is a touch-sensitive area on the side of the buds: one tap pauses your music, two skips to the next song and three summons your virtual assistant (Siri or Google Assistant). My only qualm is that if you’re pushing the buds back into your ears or you touch them while they’re in, you might mistakenly initiate one of these commands.

Other than that, I am impressed with these buds, and especially at the price. They don’t have noise cancelling and I’m sure audiophiles might not give them a 10 out of 10 for quality, but for me, the average listener, they sounded and performed just fine.

I can recommend the Letsfit T13 earbuds as a great combination of value and price. 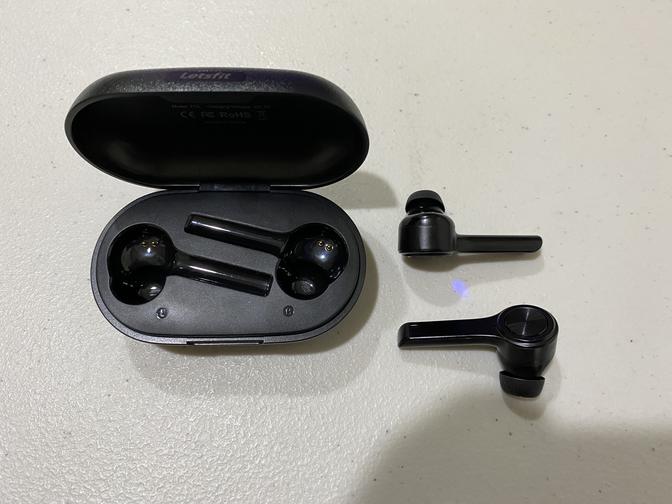 The Letsfit smartwatch looks like an Apple Watch clone. I actually really like the design since it’s so familiar to me, and the device doesn’t look cheap at all.

But the big difference here is the software. This is not the Apple Watch.

Still, the watch has what you need for basic time and fitness functionality. There’s a decently big and bright screen (although tougher to see in the sun than the Apple Watch), activity tracking, heart rate, sleep tracking, music, water resistance and more.

The battery is a champion. You’ll go days between charges.

I took it on a few runs and spin classes and it tracked my distance even though there is no on-board GPS. When it came to my heart rate, I definitely got a more accurate reading from my Apple Watch, which was on my other wrist.

Software on the device including sport tracking, heart-rate measurements, relax, alarm, music, timer and a little timeline of your activity achievements.

I was able to get some notifications to carry over to the device from my phone including iMessages, but you can only read them and not reply as far as I can tell.

When it comes to the watch, I’m conflicted about giving it a straight-up recommendation. On the one hand, I’m tempted to say put the $40 towards an Apple Watch Series 3, which you can get on sale for just $180 and it will do infinitely more as an iPhone companion.

On the other hand, this device is so cheap that it definitely exceeds expectations at this price. In just the few weeks I’ve had the watch, there have been at least two firmware updates.

In fact, the software, specifically the app, is the sore spot here. It’s called VeryFitPro and it’s complicated, with lots of settings and instructions to follow. Letsfit tells me they’re aware and they’ll be shipping a brand new app in August that they’re written themselves. VeryFitPro is apparently a third-party app they’ve been using.

Letsfit also tells me that they are dedicated to the U.S. market with support reps located stateside (the company is headquartered in China but has U.S. offices). Additionally, they take customer feedback very seriously and that probably explains the two firmware updates I saw in such a short time.

Overall, my advice is: don’t expect too much for $36 and you’ll be pleasantly surprised. Just don’t think the software or functionality is going to be as slick as a $400 Apple Watch.

NOW: Listen to the Rich on Tech podcast, where I talk about the tech news I think you should know about and answer the questions you send me!

Tags:  how to set time on letsfit fitness tracker

How to Access an Android Phone with a Broken Screen

How to Fix iPhone Stuck in Headphone Mode