Wearable video cameras, such as the Panasonic HX-A1, are typically designed to capture extreme sporting activities. The Benjamin Button camera is different, as it's focused on filming family moments. Looking like an over-sized button, the kid-centric camera shoots Full HD video before automatically selecting the best moments using sound, face and action recognition, and editing them into short shareable clips.

Currently on Kickstarter, the Benjamin Button camera is designed to capture footage from a kid's perspective, or be used hands-free by parents. It's worn using a holder attachment which clips onto clothes, like life-logging cameras such as the Narrative Clip 2. It shoots a modest Full HD 1080p video at 25 frames per second, recording it to 16 Gb of internal storage, while a wide angle lens with a 140-degree field-of-view should offer immersive footage.

However, the potentially smarter aspect of the camera is how it could save parents from the drudgery of wading through hours of footage searching for the best moments. It does this a bit like the TomTom Bandit, which uses its sensors to identify extreme moments of acceleration and jumps. However, the Benjamin Button camera will also tag highlights based on triggers like the sound of laughter, singing, screams and face recognition. Users can additionally tag moments manually using a companion app (iOS or Android). 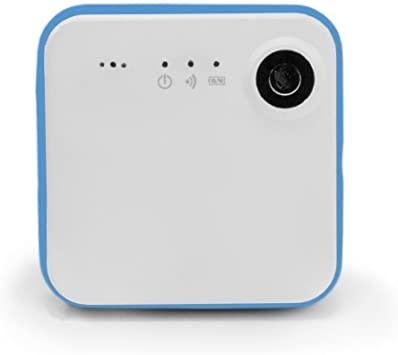 When charging (via a USB type C connector) it uses these highlight tags to compile a series of video clips in-camera, which are then made available to the companion app via a Wi-Fi connection. If you want the full recording, that is available too. Because you don't want your child accidentally sharing unsuitable content, the Wi-Fi connection is only available when the camera is charging. The built-in battery is said to be good for three hours of filming.

The styling of the camera won't be for everyone, but the over-sized button look will presumably play well with the younger audience who will be wearing it most. It will initially come in blue, pink or cream,and measure 53 mm in diameter (2 inches) 20 mm (0.79 inch) thick, and weigh 65 g(2.3 oz). On the front there are two dots – one houses the camera lens, and the other an LED light which glows different colors to notify you of things like dwindling battery life or low storage.

The kid-friendly aspects of the camera extend to its ruggedness. It promises to be waterproof, dust-proof, and made with BPA-free plastic, so it's not going to be a problem when your little one starts chewing on it either. Ironically, given the name of the device, there are no buttons and controlling it is as simple as it gets. An ambient light sensor is used to turn the camera on and start recording, so if users don't want to record, they just need to flip it around in the holder (so the sensor is covered) or pop it into a bag or pocket.

The Benjamin Button camera is currently on Kickstarter, where it will take a super early-bird pledge of US$179 to get one. Once those have gone, the price will rise to $189 and then $199. Should the funding target be met, and everything else goes to plan, the cameras should start shipping in December.

You can check out the Kickstarter video for the Benjamin Button camera below.