A Montreal start-up is disrupting the way life-saving drugs are administered to sick children by being the first to automate the process with the help of a smart arm bracelet.

Now, this breakthrough invention by NURA Medical — which is poised to change the way emergency room clinicians work worldwide — is one of dozens of Canadian research projects highlighted in a new Innovation Trends video series, called Their World, Our Future, by government-funded national innovation organization Mitacs.

The brainchild of McGill University graduate students Sofia Addab, Jean-Gabriel Lacombe, and Georgia Powell — who met while studying in the school’s Experimental Surgery Master’s program, and launched the company in June 2020 during a shared internship at the Montreal Children’s Hospital — NURA Medical’s breakthrough technology automatically provides an accurate weight measure, and performs complex calculations behind the scenes to provide a personalized medication dose based on the weight of each child seen in an emergency room.

The automated approach completely disrupts the current process, which relies on weight calculations done by hand and has a high error rate, with one in every three children treated in North America receiving the wrong dose.

“During a trauma, the emergency room can get very loud and chaotic, putting a tremendous cognitive load on nurses and physicians to ensure they get the right dose at such a critical point in care,” explained Addab, NURA Medical’s Chief Clinical Officer, who, along with the other two NURA Medical co-founders, spent months shadowing medical staff in the hospital’s emergency department.

“There was one night in particular when a difficult trauma case came in by ambulance and what stood out to us was that the physician kept asking for the medication over and over again because it was taking so long to prepare,” she explained. “The light bulb went off and we saw an opportunity to come up with a solution.”

The trio quickly identified that the medical staff’s manual calculation and preparation of IV medication was not only creating a critical bottleneck in clinical workflow but was posing a risk to children’s safety. Whereas adult medications come in standard doses, pediatric medications are prescribed according to weight, meaning a child who weighs 8 kilograms will receive a different dose than a child who weighs 10 kilograms. The problem in busy medical environments, she explained, is that treating physicians don’t have time or means to use a scale and therefore often guess a child’s weight based on age, height, or a combination of the two.

Once a weight estimate is made, nurses are given the complex task of preparing the medication, which involves doing tedious concentration and dilution calculations by hand — all of which is double-checked and sometimes triple-checked for accuracy. Yet, mistakes still happen and even the smallest of delays or errors can have a huge impact, leading to longer hospital stays or costly medical interventions for an additional global economic burden as high as $40 billion, or roughly $1.3 million per hospital per year, said Addab. 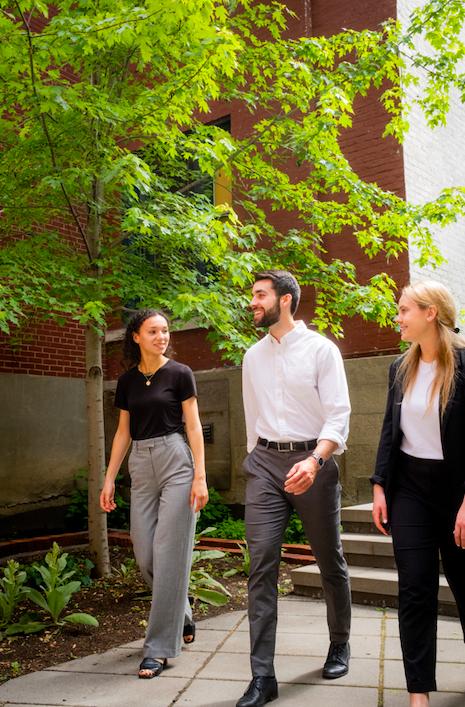 Supported by $45,000 in research funding through the Mitacs Accelerate Entrepreneur program, which funds and guides student start-up entrepreneurs to develop their technology, the three-person team applied their combined 10 years of experience in clinical, engineering, and business fields to come up with their solution.

Their invention, called the IV Assistant, is an arm bracelet with a retractable tape measure that accurately predicts a patient’s weight given their arm size and sends it to a companion web app they developed for use on a tablet. An ER nurse then signs into the app, selects the drug requested by the treating emergency doctor, and NURA Medical’s software does all of the math behind the scenes, automatically determining the correct dose based on weight, and walking hospital staff precisely through each step of IV medication preparation.

“Through our research, we found that arm size is a better predictor for overall weight than current practices, so we leveraged it and digitized it,” said Lacombe, NURA Medical CEO. Using more than 20 years’ worth of arm measurements and weights available in a massive U.S. Centres for Disease Control and Prevention (CDC) database, the team developed a first-of-its-kind weight-predicting algorithm. Based on feedback from doctors and nurses. “Having an automated process that they can trust to come up with the right dosage every time is game-changing,” Lacombe added.

Early testing of the company’s prototype is showing a 50 per cent time savings or better, meaning the current eight minutes it takes to prepare a pediatric IV medication dose on average can be shaved to four minutes or less. The team is now working to refine and test their technology and expects to have a prototype ready for regulatory approval as a class II medical device within the next few years.

Though they had no idea when they first met as students that they’d be at the helm of a groundbreaking start-up, the young entrepreneurs credit Mitacs for providing the guidance and support they needed at a critical juncture in their start-up’s journey.

“Mitacs wasn’t just about funding. Mitacs gave us a leg up when it came to establishing our research protocol and provided the expertise to address algorithmic biases in what we were doing,” said Lacombe.

“Mitacs really helped to build the bridge between our company, McGill University, and the Montreal Children’s Hospital, allowing us to rapidly prototype our device in a medical setting and giving us access to a huge network of hospital professionals in the field who are the ones experiencing the challenges our company aims to solve,” added Powell, NURA Medical COO.

Mitacs Business Development Director Ralph Chery sees NURA Medical as a shining example of how the right fit between a company, an academic partner, and industry stands to benefit all Canadians. “Mitacs’s innovation work is about making connections that help a young company develop technology faster, so they can commercialize sooner,” he said. “The goal is to help them grow and develop and ultimately, to make a positive impact in the world.”

Tags:  how to turn on a smart bracelet

The best VR games and apps that make working out fun