Along with the popularity of smartphones over the years, the popularity of smartwatches has also increased rapidly. In just a few years, wearable technology has gone from nonexistent to being everywhere. It has immediately become a worldwide sensation for being a functional product as well as a fashion statement. Smartwatches have continued to evolve over the years with various technological advancements with more functions added to the once very simple device.

If you are thinking of purchasing one yourself, we can help you choose the best smartwatches that can be found in Nepal.

Realme Watch S Pro is the most affordable smartwatch on this list. It comes with a 1.39-inch Super AMOLED round touch display in a stainless steel case. It is always-on stunning display makes the watch look premium. There is also an ambient light sensor for automatic brightness adjustment. The display is protected by Corning Gorilla Glass. The built is not bad either and is definitely worth flaunting. The watch weighs around 63.5g（with a wrist strap) and has an adjustable length from 152-223mm.

The watch runs on Proprietary OS and is backed up by 420mAh non-removable battery. The battery life is good and should be charged once in 10-14 days. It has a 6-axis accelerometer sensor, geomagnetic sensor, gyroscope sensor, heart rate sensor and wearing monitoring sensors. There are 15 sports modes like outdoor cycling, hiking, swimming, basketball and yoga. It is 5ATM water-resistant and there is a swimming mode too.

You can choose over 100 watch faces. Also, there is an option to create your own face by adding your favourite pictures.

Talking about the health features, it has automated heart rate measurement along with resting and exercise heart rate trackers. You can also set alerts for high heart rate. There is sleep detection and activity record features as well as music and camera control. It connects via Bluetooth 5.0 and the Realme Link companion app. The device is supported by all smartphones running Android 5.0 and above as well as iOS 9.0 and above.

Amazfit T-Rex comes with a 1.3 inch AMOLED screen that supports an always-on screen. The screen is protected by Corning Gorilla Glass 3. Amazfit T-Rex has a rugged build and design. It uses 12 military-grade certifications ensuring robustness and resistance to harsh environments. The watch weighs rebounds 58 grams with a wrist strap.

Amazfit T-Rex has a 390mAh battery which lasts 20 days while using in the daily use mode and 66 days while using in the basic watch mode. It has PPG bio-tracking optical sensor, 3-axis acceleration sensor, geomagnetic sensor and ambient light sensor. There are 14 sports modes like an indoor cycle, hike triathlon on the watch and is rated waterproof to 5ATM. The watch also has smart functions like the weather forecast, app notifications, call reminders that facilitate daily work and life.

For connectivity, Amazfit T-Rex uses Bluetooth V5.0 and the Zepp app. It also has a high-precision GPS chip and a highly precise dual-satellite positioning system making satellite search faster and positioning more accurate. This device supports smartphones running on Android 5.0 and above as well as iOS 10.0 and above.

Oppo Watch comes with a 1.91 inch dual-curved flexible AMOLED screen with a pixel density of 301PPI. It has a 3D curved back design that keeps the watch good-looking from different angles. The watch weighs around 39.30 grams and comes in two sizes: 46mm and 41mm.

Oppo Watch has a 430mAh battery which lasts up to 21 days in the power saving mode and 30 hours in the smart mode. The watch also charges 46% in just 15 minutes. It has a tri-axial acceleration sensor, gyroscope, geomagnetic, barometric, optical heartbeat sensor, capacitance sensor and ambient light sensor. It has different features like sleep management, 24-hour heart monitoring, and guided-breathing exercise. With real time fitness tracking from Google-fit, it provides a five-minute workout class series in daily routine exercise mode.

This device is powered by Qualcomm Snapdragon Wear 3100, Ambiq Micro Apollo3 Wireless with Wear OS by Google. With Wear OS, the user can download apps from Google Play. Oppo Watch also keeps you connected anytime, anywhere. With an eSIM, your watch can have its own number or share one with your smartphone. Whether you are on the treadmill or at the swimming pool, you can take calls phone-free. However, this function is only available when the watch is paired with an Android phone. You can also listen to online music and make mobile payments.

Fitbit Versa 3 comes with a 1.58 inch AMOLED display with slimmer bezels and a square-ish watch body and metal frame. It also has a built-in ambient light sensor and an always-on display. It weighs around 40 grams with a small band and 42.5 gram with a big band.

The battery life of the watch is 6+ days which supports fast charging and charges from 10-80 % in approximately 40 minutes. It, however, depends on the use and different settings as well. It has red and infrared sensors, 3 axis-accelerometer, altimeter, ambient light sensor and optical heart rate sensor. It also has a built-in microphone and speaker so the user can make quick calls on the wrist if they have an Android phone or iPhone. 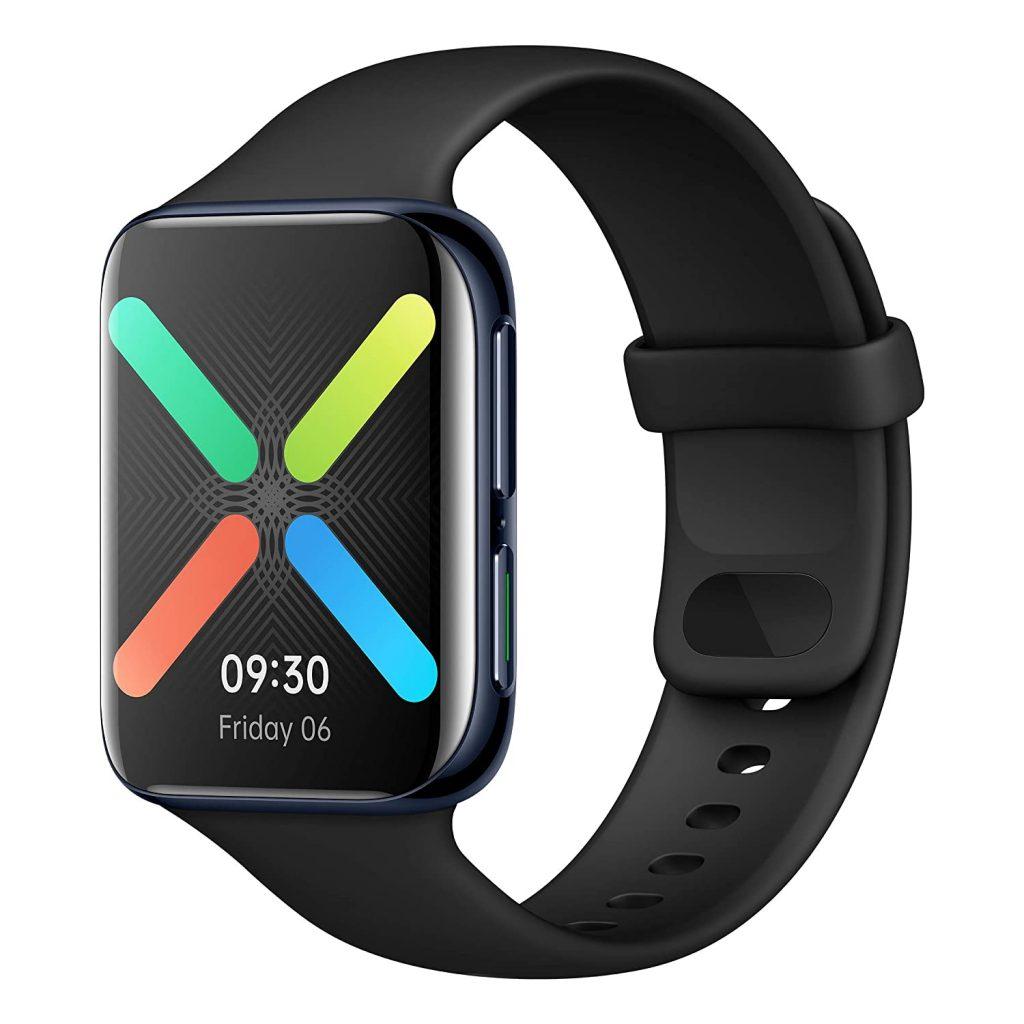 Mobvoi TicWatch Pro 2020 comes with a 1.4 inch AMOLED dual-layer display with 400*400 resolution. It measures 12.6mm thick and has been certified to have military standard 810G durability. It is also IP68 water-resistant certified. There is an always-on display mode and is protected by Corning Gorilla Glass 3. The watch weighs around 58.5 grams.

Mobvoi TicWatch Pro 2020 supports speaker and microphone and has Google Assistant feature. The watch is powered by Qualcomm 2100 processor with Wear OS by Google. The user can download apps from Google Play and store them in its 4GB internal memory. It also has 1GB RAM making the watch perform smoother. It also has an in-built GPS and supports Bluetooth V4.2. Other features include Google Pay, sleep monitoring, heart rate monitor and streaming music. The TicMotion detects running, fast walking, and biking, and tracks the user’s fitness records.

Apple Watch SE is the latest release from the Apple series along with the Apple Watch Series 6. It comes with one of the biggest displays with the 1.78-inch Retina OLED with a resolution of 448×368 pixels. The watch looks extremely premium. The watch is offered in 40mm and 44mm sizes. It weighs around 36.40 grams.

The battery lasts up to 18 hours and charges wirelessly. Charging the Watch SE from 0-100 can take two hours. It has an accelerometer, gyro, heart rate (2nd Gen), barometer, always-on altimeter and compass. It also supports eSim, with which you can make and take your phone calls.

The watch is powered by a dual-core Apple S5 chipset with watch OS 7.0 and is upgradable to 7.3. The user has access to the Apple app store and can download various apps and store them in its 32GB internal memory.

Another notable feature is its fall detection and emergency SOS which can detect if the user has taken a hard fall and connects the user automatically with emergency services if the user is immobile.

Samsung Galaxy Watch 3 is the most advanced Galaxy watch yet. It comes with a 1.4 inch Super AMOLED display with a resolution of 360×360 pixels. The display is protected by Corning Gorilla Glass DX. The 45mm version is the first-ever titanium designed watch which weighs around 53.8 grams. The user can choose from over 50,000 watch faces and even make their own look. The watch is also 5ATM/IP68 and MIL-STD 810G certified making it a tough watch.

The watch has 340mAh non-removable battery which charges on Qi wireless charging. The battery can last from two to three days in general use while it can last a day and a half if using the GPS and heart rate monitor even more. The average time to fully charge the wearable from 0-100% is two and a half hours. You can also charge this device from Samsung smartphones that support the Wireless Powershare feature.

Samsung Galaxy Watch 3 is powered by a dual-core Exynos 9110 chipset with Tizen OS 5.5. It has an in-built 1GB RAM and 8GB internal memory. It also supports Bluetooth 5.0 and has features like an accelerometer, gyro, heart rate, barometer and Samsung Pay. It also detects atrial fibrillation which is a type of irregular heart rhythm, monitors and tracks blood oxygen and keeps sleep score. It also notifies an emergency contact and shares the user’s location if it detects a hard fall.

Topping our list for the best smartwatch in Nepal is the Apple Watch Series 6. This watch has a massive 1.78-inch always-on Retina OLED display with a resolution of 448×368 pixels. It is protected by sapphire crystal glass. It is also 2.5 times brighter than its predecessor. Like Apple Watch SE, this is also offered in 40mm and 44mm sizes and weighs 30.5 grams and 36.5 grams respectively without a strap.It has a water-resistant level of up to 50 metres.

The 303.8mAh non-removable battery will last up to 18 hours on a single charge and will approximately take two hours to charge fully. It has an in-built compass, barometer, altimeter, SpO2 sensor, second-gen optical heart sensor and electrical heart sensor. The eSim support is also available on the watch, with which you can make your calls or texts even without carrying your smartphone.

Apple Watch Series 6 is powered by a dual-core Apple S6 chipset with watchOS 7.0, which is upgradable to 7.3. It supports Bluetooth 5.0 and has an internal memory of 32GB and 1GB RAM. Other special features of this watch are supporting ECG anytime and anywhere, a new blood oxygen sensor, sleep app, exercise option and an always-on altimeter that continuously tracks elevation changes in real-time. Users also have access to over 70 million songs on Apple Music and can invite friends to compete in a seven-day activity challenge.