Live HealthSmart AlabamaLive HealthSmart Alabama aims to advance healthy eating, physical activity, and prevention and wellness in underserved neighborhoods throughout Birmingham and the state.(Photo by: Steve Wood), a University of Alabama at Birmingham initiative, celebrated phase one improvements in the Kingston community today at Stockham Park. These improvements are the culmination of a yearlong implementation project to improve the community’s infrastructure, including new and improved sidewalks, Americans with Disabilities Act-compliant street ramps, trees and flowers in Stockham Park, painted murals, new bus shelters, improved lighting in hard-to-see areas, and more.

“Live HealthSmart Alabama aims to advance healthy eating, physical activity, and prevention and wellness in underserved neighborhoods throughout Birmingham and the state,” said Mona Fouad, M.D., principal investigator of Live HealthSmart Alabama and director of the UAB Minority Health and Health Disparities Research Center. “To help achieve these aims, we started by making community improvements. This was especially evident in the built environment. We’re excited to show everyone what has been accomplished.”

To reenergize the community and encourage walkability, Live HealthSmart Alabama — in partnership with Brasfield & Gorrie and subcontracted through AG Gaston — knew sidewalks in Kingston needed to be either repaved or built from scratch. To contribute toward this initiative, Kirkpatrick Concrete donated all of the concrete used to make these improvements. Other partners that contributed to the accomplishments in Kingston include O’Neal Steel, Coca-Cola United, the City of Birmingham, Alabama Power, Steward Machine, Birmingham Jefferson County Transit Authority MAX, Goodwyn Mills Cawood, Blank Space, NAFCO, Birmingham Parks and Recreation, and Watkins Trucking Company. 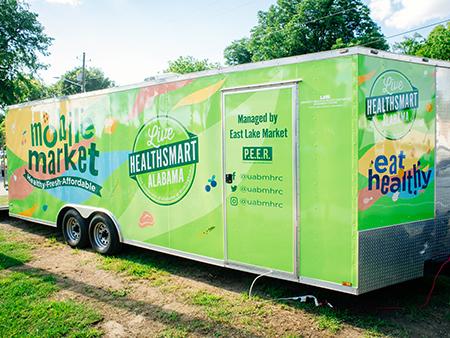 “It has been a great and rewarding experience working with the City of Birmingham and Alabama corporations to accomplish the built environment improvements in Kingston,” said Fouad Fouad, Ph.D., director of the UAB Sustainable Smart Cities Research Center. “I believe these strong partnerships between academia and industry are built to last forever.”

While each community’s needs are unique, a consistent issue Live HealthSmart Alabama has found in underserved areas is that these neighborhoods fall within areas that either have limited access to fresh fruits and vegetables or are food deserts.

According to the USDA, a food desert is a place where one-third of residents live more than one mile from the nearest grocery store. Using this definition and census tracks, the USDA estimates that roughly 19 million people (or 6.2 percent of the United States population) live in a food desert.

To bring healthy and affordable food to Birmingham residents, Live HealthSmart Alabama is introducing its new Mobile Market at the Kingston ribbon-cutting — which will run in partnership with Promoting Empowerment and Enrichment Resources (P.E.E.R.) and East Lake Market. Each week, the Mobile Market will visit communities in Birmingham, starting with their demonstration areas (Kingston, East Lake, Bush Hills and Titusville). Shoppers can purchase proteins, fruits, vegetables, grains and a variety of other healthy food options using cash, card, EBT or Double-Up Bucks.

“Currently, Alabama has some of the worst health outcomes in the nation,” said Mona Fouad. “The goal of Live HealthSmart Alabama is to move our state out of the bottom 10 in national health rankings. To do this, community members have to have access to healthy food options and the tools to be successful. The Live HealthSmart Alabama Mobile Market helps to provide that.”