For a lot of folks, the start of the new year is the natural time to focus on fitness as a goal for the year ahead. It's certainly true for Apple who just unveiled some additions to its Fitness+ service to kick off 2022.

The service, which launched in December 2020, has seen a few updates since then but there's still plenty of room for more Fitness+ improvements. Here's how Apple can take Fitness+ to the next level in 2022.

When SharePlay for Fitness+ was first announced I was excited. My wife and I both wear an Apple Watch and, up until that point, when completing a workout together we'd have to find and start the same workout video (one on the Apple TV and the other on an iPad) at the same time. We'd both watch the workout on the Apple TV and have the sound muted on the iPad, but it was the only way for us both to get the credit for completing the Fitness+ session.

The downside was that only one person's Apple Watch rings were displayed on the big screen and we had the awkward and imprecise process of counting down from three to press play at the same time. Not a magical Apple experience.

While SharePlay solves some of those problems and is a particularly great tool for those not in the same room wanting to work out together, it's overcomplicated for families. What I really want to see is the Apple TV (or even iPad) Fitness app allow more than one user to join the same workout. When first opening up the Fitness app on Apple TV, you get to choose which Apple Watch you want to connect to for the workout but right now you can only pick one. It should simply let me pick more than one at this stage, run the workout on all of them, and show the rings for each device on-screen. This could even be capped at two to five devices to stop the UI from getting overcrowded.

For some people, working out is a regimen and they hit the gym or the play button on a Fitness+ workout at the same time every day. For others, their working out time is much more sporadic, spontaneous, or just has to fit in around other priorities in life. It can be hard, therefore, to tie some people down to working out with you at a particular time over SharePlay as Apple intends.

It's not always possible to jump onto a FaceTime call.

Instead, Apple could implement a shared workout system in which participants don't have to partake at exactly the same time. Perhaps I complete a HIIT workout in the morning and my workout buddy does the same workout later in the day. Though it wouldn't have quite the same effect as doing it live, this way there's still a social and motivational element to Fitness+ workouts without the need to be ready to hop on a FaceTime call.

Since the Apple Watch became a regular part of my life, I've gone through periods of feeling really motivated seeing my fellow Apple Watch-wearing friends' workouts as well as times where I've turned off the social features entirely after feeling overwhelmed. I think this asynchronous workout feature requires a bit of nuance in order to not feel like a guilt-trippy nag; something like the week-long activity competitions that you can set up ad-hoc between friends. It could be a neat addition for when you're feeling up to it.

Fitness+ already allows for some filtering, by letting you filter workouts by trainer, time, music, and required equipment. These are all useful and oftentimes necessary. However, Fitness+ now has over 2,000 workouts in its library, so some more advanced filtering is needed to make it even easier to find the right session. 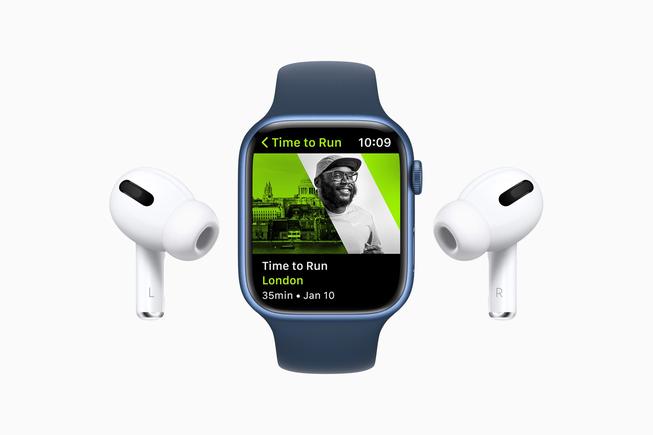 Tapping through each workout to find the right one is a real barrier to pressing play on one.

The new Collections feature helps — and will hopefully continue to be updated regularly — but sometimes you want to be able to cherry-pick your workout on other criteria like difficulty or muscle group. The day after a long run outdoors, for example, I might not want to end up in a strength workout that throws in several rounds of squats. Each workout episode description does describe what the workout contains and how strenuous it should be, for the most part, but tapping into each episode to find one you want is a real chore and a true barrier to actually pressing play on one.

Apple has already shown its willingness to use the power of celebrity to try to take Fitness+ mainstream by attaching names like Shawn Mendes, Naomi Campbell, and Prince William to Time to Walk workouts. It has also emphasized particular musicians in workouts with its Artist Spotlight series.

One feature that flew under the radar somewhat is its Guest Trainer Series, announced back in June. Six months on, Jeanette Jenkins, the trainer with whom the series launched, remains the only guest trainer.

Apple has shown its willingness to use the power of celebrity to take Fitness+ mainstream.

I see the Guest Trainer Series as a great opportunity for Apple to bring in renowned fitness experts on a temporary basis, while also bringing with them their own audiences. It's great for users who get to experience a new style of coaching or some particular workout expertise and likely good for Apple as the new trainer will put Fitness+ in front of more eyes.

It's not hard to imagine a series from people like Sweat founder Kayla Itsines, A-list personal trainer Harley Pasternak, or popular UK instructor Joe Wicks. Apple could even enlist current or former athletes for some insightful coaching and celebrity pulling power.

Iron out those bugs

Last, but certainly not least, Apple Fitness+ still has some lingering bugs that have been around since it launched. It occasionally loses connection to the Apple Watch and crashes. It's not possible to resume a workout where you left off and it's not even possible to scrub forward manually in a workout to get to the point where it crashed.

There's also no way to start a workout on one device and pick up where you left off on another. That's rarely a problem, but sometimes someone else might want to use the TV and point the exerciser to the iPad in another room.

It's clear that Apple intends to continue pushing its services hard into 2022 and I hope that Fitness+ continues to get updated throughout the year with new features, workouts, and collections.

I know January is the time of year in which everyone hopes to snag some of the best Fitness+ equipment and reignite their passion for fitness. Apple is making the right noise regarding Fitness+ continuing to improve in 2022 at the moment. Let's hope it can keep its New Year's resolution better than most of us can.

Apple says that Epic Games has failed to prove that the court made any errors in ruling it did not have a monopoly on mobile game transactions last year.

Apple has confirmed the HomePod mini is today rolling out in Belgium, Switzerland, and the Netherlands.