The Fitbit Charge 5 and Fitbit Luxe are the first two fitness trackers from Fitbit to come packing AMOLED color displays – and that alone makes them devices to get excited about.

We've reviewed the Luxe already and were big fans of its stylish look and mix of fitness and health features. The Charge 5 offers more of the same, making it all the more difficult to decide between them.

If you're sizing up the new Charge and the Luxe, we've compared the features and specs to help you understand what the key differences are between the two.

So that's around a $30 difference in price, so does grabbing the Charge 5 for more money actually get you significantly more tracker than the Luxe?

Let's take a closer look at the design and specs.

The Charge is Fitbit's flagship tracker, offering a design that's undeniably sporty and offered the biggest screen outside of its smartwatches. The first Fitbit Charge landed in 2014, and the Charge HR was the first Fitbit to include a heart rate monitor – and it's still going strong five generations later.

By contrast, the Luxe is a new range for Fitbit launched in 2021, but it clearly takes strong design inspiration from the Fitbit Alta it retired a few years ago. It aspires to offer a jewellery-like look.

Both have color AMOLED touchscreen displays with the Luxe packing a 0.76-inch, 124x206 resolution display.

The Charge 5 has a larger 0.86-inch display, although Fitbit hasn't specified the resolution of the Charge 5 screen, it offers more screen estate for stats, displaying the time and showing off watch faces. It also offers an always-on mode if you don't want to raise your arm to read the time, although that will shorted the 7 day quoted battery life.

There's no physical buttons with Fitbit moving to the haptic kind baked into the case. Fitbit also includes stainless steel panels on the Charge 5's case to enable ECG and EDA readings.

Looks-wise, the Luxe is slimmer than the Charge 5 – and certainly aimed at a the female market.

The Charge 5 does have that always-on display and the use of aluminium over the stainless steel used on the Luxe means it should be good looker too if more tracker-like in appearance.

The Charge 5 and the Luxe are designed to offer you those core Fitbit tracking staples, with a 3-axis accelerometer used on both to track steps, activity and detect sleep with insights like sleep stages, sleeping heart rate and sleep scores covered across both – in exactly the same way.

There's optical heart rate monitors to continuously measure heart rate and track effort levels during exercise. They both include red and infrared sensors to enable SpO2 monitoring during sleep too.

So for most of the important stuff, these two devices are neck-and-neck. 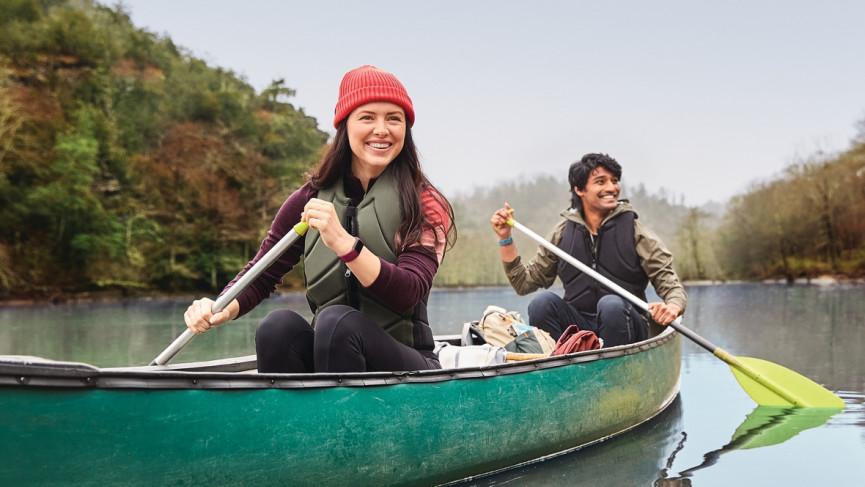 However, the Charge 5 additionally includes an ECG sensor to deliver more accurate heart rate readings and to help assess the heart for atrial fibrillation.

On the sports tracking front, the Charge 5 has built-in GPS while the Luxe offers connected GPS, which means it uses your phone's GPS to track outdoor activities, which you must take out with you. In our testing through the years, paired GPS from a smartphone is never as accurate as built-in.

The Charge 5 also includes an altimeter to measure elevation, which you don't get on the Luxe either.

Across both, you can expect 20 exercise modes with automatic exercise recognition support for core activities like running, walking and pool swimming.

Software features like workout intensity maps and Active Zone Minutes are available on both too. They both offer new Daily Readiness scores, which are based on activity tracking, heart rate variability measurements and most recent sleep tracked to tell you if you should tackle a tough workout or take a rest day.

The big difference here is the ECG sensor, which is only found on the Charge 5 and the Sense smartwatch. So if the idea of being able to monitor heart rate for health reasons is important to you, it's the Charge you want.

If you're looking for the Fitbit tracker that can help you pay closer attention to your stress and general mental wellbeing, both the Charge 5 and Luxe offer features on that front with the Charge giving you some extras.

The Luxe offers guided breathing features on the band itself and then you can then head to the Fitbit app to access guided meditations and soothing soundscapes along with stress scores to reveal physical stresses on the body based on heart rate variability measurements.

The Charge 5 offers those features as well but additionally includes the EDA scan app from its smartwatches to measure the body responses to stress. Like the Luxe, some features like a richer collection of guided meditation and sleep sounds are locked behind Fitbit's Premium subscription service.

So that EDA scan app here is the main key difference on the wellness features front. That aside, these trackers offer a lot of the same features if monitoring your mindfulness is a big priority for you.

When it comes to using these trackers as smartwatches, the Charge 5 has the upper hand.

You can view notifications with the ability to send quick replies when paired to Android phones. You can set up silent alarms and sleep modes, there's music controls for Spotify, access to watch faces and you also get Fitbit Pay support.

The Luxe does also offers that notification support too and you're also getting the same silent alarm, timer and stopwatch modes, but it lacks those Spotify controls and perhaps more notably, Fitbit Pay.

So if you're after the richer smartwatch experience, the Charge 5 is the tracker that's going to offer you the most.

It takes two hours to get from 0-100% when it comes to charging the Charge.

Fitbit does note that if you make use of the always-on display mode and SpO2 monitoring, that will drain the battery quicker.

The Luxe in comparison will get you up to 5 days battery life, so a couple of days short of what the Charge 5 can deliver.

We found it held true to those battery numbers too, but you could well get a full week, depending on the features you use on a regular basis. It also takes a couple of hours to get from 0-100% when you do fully run out of battery.

Fitbit Charge 5 v Fitbit Luxe: Which is right for you?

So based on what we know about the Charge 5 so far and from our testing time with the Luxe, how do these two compare and which one would be the best fit?

Feature sets of these two trackers are broadly similar whether it's tracking your fitness or closely monitoring things like heart rate, stress and blood oxygen levels during sleep.

Buy the Fitbit Luxe if...

If you value a slim, band-style look with those core Fitbit features covered, then the Luxe is the one that fits the bill.

While the Charge 5 packs in a lot of extra features, the excellent sleep monitoring, activity tracking, Active Zone Minutes and Stress Management are the same across both devices.

It's better for smaller wrists, if you're willing to forgo ECG and built-in GPS.

Buy a Fitbit Luxe on Amazon

Men: you probably want to opt for the Charge 5, which suits larger wrists. But this is still very much a unisex device.

Women and men alike who are looking for a top mix of fitness and health features will find the Charge 5 a great fit – with it well suited to gym workouts, running sessions and HIIT.

The extra battery life is also , then it's the Charge 5 that looks like the one to go for. It's more expensive, but you're getting some pretty big features for that extra money.

These are two trackers with impressive features and in the case of the Charge 5, we're finally getting something that should look good on your wrist too.

46 Best bluetooth controllers for iphones in 2021: According to Experts.