There's never been an easier time to be health-conscious, with the technology we use every day now prioritizing our physical and mental wellbeing more than ever. One way it has become easier to be more aware is with the rise of the best fitness trackers, which alert you to problems, track your exercise, and compile useful reports on the quality of your sleep, heart health, and pretty much anything else.

Many fitness trackers also double as smartwatches, ideal for keeping track of emails, messages, and alerts wherever we are. And new capabilities are being added all of the time, with all of the entries on this list able to track blood oxygen levels as well as heart rate changes and sleep quality.

The Fitbit Luxe now has the ability to track your blood oxygen levels, after a firmware update introduced the feature. This is particularly useful for sleep tracking, as well as for those with specific medical concerns, and so has increasingly become a popular feature for the best fitness trackers to include.

The Fitbit brand name has become synonymous with the best fitness trackers for a reason - their devices have a health-focused mission statement and, increasingly in recent years, general wellness has become another concern central to the features of Fitbit watches.

The Fitbit Luxe boasts a tertiary focus on design, with a color AMOLED screen and minimalist size making it something that also looks good. This is obviously important if you want to wear the tracker on a daily basis, and many of the features encourage you to do just that. A stress management score, for example, aims to keep you mindful of the anxieties of the workday, and the Daily Readiness score reminds you those rest days are just as important as your weekly gym sessions.

The Luxe also tracks the usual things like sleep quality and your heart rate, but recently it has added SP02 blood oxygen tracking and GPS for real-time pace and distance statistics. You get more with a premium membership, six months of which are included with your purchase.

As with all Garmin watches, while the 245 has features designed to monitor general fitness and wellbeing, it has primarily been designed with avid runners in mind. This is reflected not only in the features it offers but also in the convenience added by onboard storage space for music and its own Bluetooth for connecting headphones.

This means you can leave the house wearing the Garmin 245 and not worry about taking your phone, and the device also boasts elements that can only work with a wearable, such as fall detection if you're worried about getting injured. It will also assess your 'Body Battery', which is similar to other watches' stress scores.

Blood oxygen monitoring is on board with the 245, as well as GPS and heart rate stats. The design is slightly more 'masculine' than something like the Fitbit Luxe, but this will depend on personal taste and, if your exercise of choice is running, Garmin watches are the best out there.

The first entry on our list that's more accurately described as a smartwatch with health tracking, rather than the other way, the Apple Watch Series 7 is the tech giant's latest release and works hard to be so much more than a fancy pedometer. The Apple Watch is designed as an extension of the iPhone, and so only works with your iPhone with no Android support. 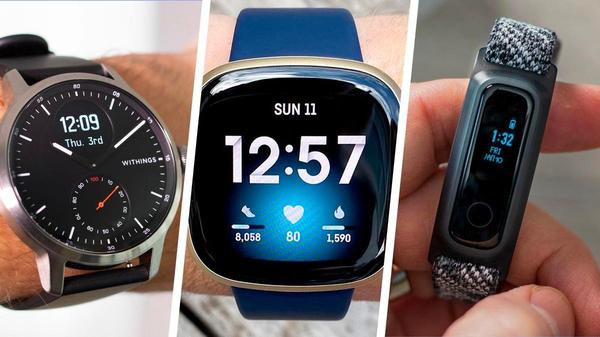 If you're already deep in the iOS ecosystem, though, the Apple Watch is a seriously helpful wearable with some health and wellness features that set it apart. You have the heart rate monitor, sleep tracker, and mindfulness apps, but also integration with lots of third-party apps on the app store. This model also has blood oxygen and ECG functionality.

The biggest drawback of the Apple Watch is the battery life, which suffers under the strain of how much you can do with it. The Series 7 claims a 33% faster charge speed, but still only promises up to 18 hours of life. Still, if you want a watch that monitors your health while limiting how much you need to look at your phone, it's a top pick.

In opposition to the Apple Watch, which will only work at its full potential for iPhone users, the Samsung Galaxy Watch 4 is best used by those who own a Samsung-branded smartphone. Any Android phone should be okay, but there are some key features (like ECG) that will require you to go all-in on the brand's tech.

Otherwise, the Galaxy Watch 4 is a good Android alternative to the Apple Watch, with a very different design and focus on the specifics of body composition as well as fitness and mindfulness. As such, you can use the watch to track things like skeletal muscle, fat mass, and water, which are metrics not widely available from the competition.

The watch is on the heavier side, however, with a large face that's also relatively hefty. This matters most if you're intending to wear it while sleeping, but we'd expect most will get used to the extra weight over time.

A high-end smartwatch for those who want their technology to be indistinguishable from the rest of their style, the Withings Scanwatch has been developed alongside cardiologists to support heart health above all else. There's no touchscreen or chunky buttons here - just a minimalist display nestled within a classic watch face.

One of the most impressive things about the Withings offering is its battery life, which will give you an enormous 30 days of use on a single charge. This is somewhat due to the lack of a touchscreen, but it's a plus for those who don't want to take their watch off to charge several times a week.

As said, the Scanwatch puts heart health front and center, with the ECG features promising to detect atrial fibrillation in just 30 seconds. There's also the blood oxygen monitor that's now expected. There's one caveat, however - Withings warns against using the watch with pacemakers.

How to choose the best fitness tracker for you

How do fitness trackers work?

There are a variety of ways that the best fitness trackers and wearables work to monitor and optimize your overall health and wellness, and your personal priorities and goals will determine which watch is right for you.

All of the examples on this list monitor things like blood pressure, sleep quality, and oxygen saturation using sensors on the underside of the watch's face, and a 3-axis accelerometer to track movement. With this technology, your watch can tell how you're moving and at what speed, with some watches able to automatically determine what kind of exercise you're doing based on these stats.

Should I get a fitness tracker or a smartwatch (and what's the difference?)

There is essentially no difference between smartwatches and fitness trackers, though some of the former can be more focused on productivity like monitoring emails, calendars, and message alerts. Fitness trackers may also include this functionality, but health features such as meditation apps, activity trackers, and access to online fitness communities are more at the forefront.

All of the fitness trackers listed in this guide are water-resistant, meaning you can use them while swimming, doing the dishes, or even in the bath. Each watch has a specific waterproof rating, so check the information if you want something that will withstand a leisurely dip in the pool. It's also important to remember that other substances such as soaps, washing liquids, and moisturizers may damage the device.

Tags:  how does fitness tracker work