Apple Watch has turned into one of Apple's most popular product categories, and you probably see them on wrists out and about all the time. There are several generations to choose from these days, with the latest Apple Watch Series 7 having just been released and affordable models like the Apple Watch SE and Apple Watch Series 3 still available.

We haven't seen much in the way of Apple Watch Series 7 deals just yet as the device is so new and supply has only just caught up with demand. Older models like the Series 6 can still be picked up, and these are often heavily discounted so we expect Black Friday will bring on some all-time lows for the year-old device. Apple keeping the Apple Watch SE and Series 3 in its lineup also means that retailers have a few models to entice shoppers with.

Where to find the best Black Friday Apple Watch deals

With the number of Apple Watch deals we see year-round, we expect the Black Friday Apple Watch deals will kick off in earnest very soon. We'll be rounding up the best offers on this page but the below retailers are a good place to start if you want to see the deals each has to offer right now.

Though the Apple Watch Series 7 retains the rounded shape of its predecessors, it comes in some new hues and has a slightly larger display at 41mm or 45mm. That larger display allows for some exclusive new watch faces that make the most of the extra real estate as well as a full-size QWERTY keyboard for composing quick text replies.

Other notable improvements include faster charging, a more crack-resistant glass screen, and an IP6X dust resistance rating, a first for Apple Watch. That's on top of the already-stellar 50M water resistance rating.

Apple's latest Apple Watch model hasn't seen much in the way of discounts, though you can save $19 at Amazon right now. Various colors and configurations are discounted. 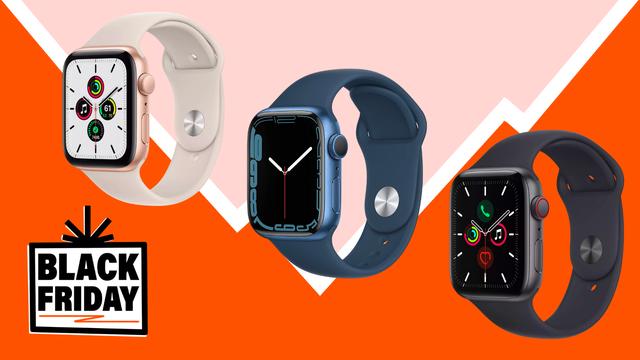 Despite no longer being the newest model, Apple Watch Series 6 is still a super functional smartwatch by today's standards. Powered by the S6 chipset, it's 20% faster than the Series 5 that preceded it and features an always-on display. Like all Apple Watch models, it's great for tracking your health and fitness goals with precise heart rate monitoring plus it even includes a blood oxygen monitor — something older Apple Watch models do not have.

The Series 6 was in no way eclipsed by the Series 7, and is almost certainly a better choice at this stunning price point.

Though it's no longer the latest model, the Apple Watch Series 6 still gets you a lot of smartwatch for your money. You can save $50 on one at Amazon right now.

Prefer the larger Apple Watch face? You can actually snag one for less than the smaller version if you go for the red version at Target. Don't forget to use your RedCard for a further 5% off, too.

The Apple Watch SE launched as a lower-tier alternative to the more premium Apple Watch models, saving on cost by stripping out some of the more advanced tech and including only the essentials. It's still a good choice today, especially if you're new to Apple Watch or you want to save a bit of money versus going for the newest model.

If you've been holding out for a Black Friday Apple Watch SE deal then look no further than this $60 price cut. It's never gone lower than this, and we don't expect it to fall further later this week.

You can save close to $60 on the 44mm GPS + Cellular model of the fabulous Apple Watch SE, the only catch is it's currently not in stock, but you can still order the watch now at this incredible price.

Apple Watch Series 3 is a little long-in-the-tooth in 2021, but it could see some significant movement in price during Black Friday making it one to pay attention to. Though you'd miss out on advancements in pretty much every aspect, the Series 3 could be a good pickup for someone wanting to try out an Apple Watch for the first time or those really wanting to spend as little as possible. We've seen it go as low as $99 in previous sales making it tempting, though it would be worth stumping up the extra cash for the Apple Watch SE if that drops considerably during Black Friday sales.

While it's no longer the latest model, you'll struggle to find a lower-priced Black Friday Apple Watch deal than this. Apple Watch Series 3 has never gone this low before but the deal won't last for long.

Prefer the slightly larger watch face? The 42mm Apple Watch Series 3 is also discounted by $90 — but time's ticking on this deal too.

When do the Black Friday Apple Watch deals begin?

Right now! Black Friday 2021 is here and the Apple Watch deals are already flowing like wine. Whichever model you want, you can likely find a deal on one right now.

With global chip shortages, production issues, and shipping backlogs, it's best to get your order in as soon as possible to avoid delays and disappointment.

Verizon and AT&T's C-band 5G upgrade: From airports to rollouts, the latest on what you need to know