Representative Alexandria Ocasio-Cortez’s 23 July address to the House of Representatives was a welcome reminder of what political speech can be: eloquent, lucid, truthful, intelligent, moving and persuasive. It also made you aware of how low public discourse has sunk. From both sides of the aisle, we hear soundbites, attacks, promises that vanish before the ink dries, reasons the rich should prosper while the poor stay poor. We’ve learned to accept the word salad – rambling, digressive, inarticulate, salted with evasions, distortions and lies – we’re served whenever Trump comes to the table.

By contrast, Ocasio-Cortez’s address was a masterpiece of heartfelt, unadorned plain speech that (consciously or instinctively) employed the tools of the orator, the rhetorician and preacher. What carries us is repetition, rhythm, emphasis, cadence, pronunciation (the congresswoman leans into her Bronx vowels) and a seamless transition from each event or idea to its larger implications.

Walking up the steps of the US Capitol building, the congresswoman, as she tells it, was “minding my own business” when she was “accosted” by Representative Ted Yoho, a Republican from Florida, who “put his finger in my face … He called me disgusting, he called me crazy, he called me out of my mind, he called me dangerous.” Then she went into the building to vote, to make sure, she adds, that her constituents from New York’s 14th district can keep their homes, feed their families and live with dignity.

When she reappeared on the steps, Yoho, in front of the press, called her, “and I quote, ‘a fucking bitch’.”

It’s worth watching the video to see how Ocasio-Cortez, without particular outrage or emotion, pronounces three words that explode like smart bombs in the decorous House. The insult is horrifying, but she’s not all that horrified. Because she’s had working-class jobs, she’s heard it before. She’s “tossed men out of bars”. So she’s not some fragile flower – read female – who can’t take the rough and tumble of Capitol Hill. Yoho’s abuse was neither “deeply hurtful” nor “piercing” to her, though she notes that his behavior was not an isolated event but part of a “culture of impunity” that accepts “violence and violent language against women”. By saying it in front of a reporter, he was giving other men “permission” to do the same.

It’s too bad this had to happen, but I, for one, am glad that “fucking bitch” has been entered – for the first time, I assume – into the congressional record. As hateful as those words are, they alone can express the nastiness, rage and contempt that are heavily diluted when the insult is euphemized into “a vulgar slur” or (as Yoho’s spokesman sweetly described it) “a barnyard epithet”. 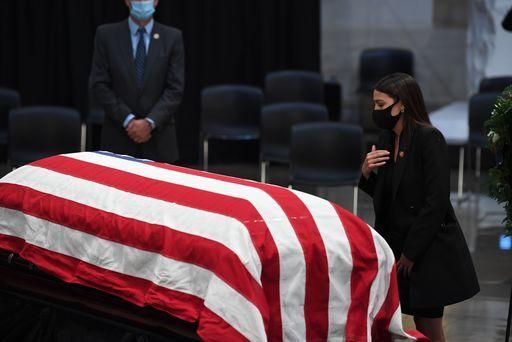 Meanwhile Ocasio-Cortez’s speech takes another turn. She’d been ready to let the incident go, “pack it up and go home – It’s just another day, right?” But what drove her to speak up were the excuses Yoho gave Congress, insisting that it was all a “misunderstanding”, that “having been married for 45 years with two daughters, I’m very cognizant of my language”.

In a few rhythmic sentences, Ocasio-Cortez pulverizes the “daughter defense” – the suggestion, made by men including Brett Kavanaugh and Mitch McConnell, that having female children automatically makes them more sensitive and respectful to women.

“And this I could not allow … I could not allow the victims of verbal abuse, and worse to see that – to see that excuse and see our Congress accept it as legitimate. I do have issue with using women, our wives and daughters as shields, as excuses for poor behavior. I am someone’s daughter too. I am their daughter, and they did not raise me to accept abuse from men.

That resonant word, decent, may remind some listeners of how the chief counsel for the US army, Joseph N Welch, began the downfall of the destructive and despotic Senator Joseph McCarthy by asking the famous question, “Have you no sense of decency?”

Ocasio-Cortez ends her speech with more repetitions (accost … without remorse) and variations as she thanks Yoho and brings us full circle back to the Capitol steps. “I want to thank him for showing the world that you can be a powerful man and accost women. You can have daughters and accost women without remorse. You can take photos and project an image to the world of being a family man and accost women without remorse and with a sense of impunity. It happens every day in this country. It happened here on the steps of our nation’s Capitol. It happens when individuals who hold the highest office in this land admit, admit to hurting women, and using this language against all of us.”

In rhetoric, the name for the repetition of an opening phrase is anaphora, and if you Google the word, several sites direct you to Marin Luther King’s “I Have a Dream” speech. I’m not suggesting that Alexandria Ocasio-Cortez comes anywhere near MLK’s oratorical powers, but she’s on her way. She’s different from what we’re used to hearing. She makes us pay attention. With her tone, word choice, posture, her honesty, she makes it clear (in case it needs clarification) that women are as articulate, intelligent and brave as any man. Women have been accused of being irrational but the logic of Ocasio-Cortez’s speech proves (in case it needs proving) that women are as cool-headed as any man, certainly more than Yoho.

If, in the future, there are public speaking classes, students might study Ocasio-Cortez’s speech, which has been widely tweeted, viewed on YouTube and other social media. At least 10 of those views are mine. This was partly because she was speaking for me and every woman who has ever been called a fucking bitch. But I also kept watching because, as someone who, to quote Yoho’s sad, stiffly awkward phrase, is “cognizant of language”, I wanted to watch the congresswoman’s speech and try to figure out how she did it.

How to Delete Workout on Apple Watch