I hate answering the phone. If you tried to call me a few months ago, I probably wouldn't have answered unless you texted me beforehand. (What are you, some kind of serial killer?) But I'm now much more inclined to pick it up. Fisher-Price's first plastic phone reminds me of that far-off time when I loved and looked forward to long phone conversations, instead of dreading them.

It was great to be born in the ’90s. I can remember a time before tech became completely ubiquitous. I played with a box full of Barbies and Bratz Dolls in my room. When I got into bed, I just fell asleep, instead of scrolling endlessly through social media. My first cell phone was a teeny tiny Tracfone that could only send a handful of texts before running out of minutes. It was for emergencies, not permanently stuck to my hands.

I'm not saying I would throw all my devices away, but these times have me craving some sweet childhood memories. Enter the Fisher-Price Chatter Telephone.

Sweet Dreams Are Made of This 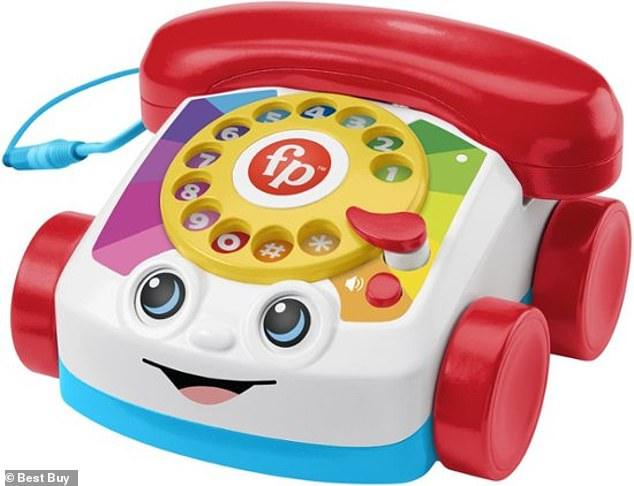 Yep, it's that Chatter Phone. It looks and feels exactly like the toy I had as a kid. Its shiny plastic exterior is complete with a working rotary dial and eyes that move with its wheels. As the advertising says, our first “mobile” phone is now an actual mobile phone.

Turn it on and a voice says, “Hi there!” But instead of just playing make-believe, I can actually make calls with it. I have an old rotary phone, and sometimes I turn the dial just to satisfy a tactile need. But being able to use a real rotary dial to call someone—without having to pay a separate landline fee—isn't something I've been able to do before.

When I was in high school and people started to get iPhones, retro-inspired handsets that plugged into a phone's headphone jack were briefly popular. This Fisher-Price phone brings that idea into this age. (Most phones don't have a headphone jack anymore, remember?) It connects instantly to any modern cell phone with Bluetooth, so there are no cords to worry about other than the charger. You should get around nine hours out of the battery before it needs to be plugged in.

Calls sound crystal clear, and the dial works seamlessly too. I wish the cord connecting the handset to the body was a little longer, but it's so light and portable that you can just move the whole thing closer to you while you chat. You can also put it on speakerphone if you need to move around more, and it still sounds pretty great.

This phone is, sadly, only a limited-time device; hopefully, it will come back in stock for holiday gifts. But it makes me oddly happy to see people venturing out of their comfort zone. We might never get big, boxy orange iMacs again, but we can still satisfy our nostalgia, one device at a time.

I loved learning to type in a computer lab full of those cuddly iMacs; I grew up listening to the ear-piercing screeches of dialup only to have someone yell from the other room that they were on the phone. I chatted through AIM and Myspace and before that, a Good Charlotte message board where I accidentally insulted a band I knew nothing about, because I was a child with a keyboard.

The Whoop 4.0 is the Best and Most Comprehensive Fitness Tracker Right Now - Latest Tweet by Bloomberg