Market analyst Canalys has produced a report detailing the state of the global wearable band market. Apparently, Xiaomi is now the world’s largest wearable band vendor in terms of units shipped and market share, just beating out Apple for the top position. Xiaomi shipped an estimated 8.0 million wearables in Q2 2021 while Apple managed 7.9 million, leaving the tech rivals on 19.6% and 19.3% market share, respectively. Huawei looked strong in third thanks to its large domestic fanbase but annual growth was down by a huge -53.9%. 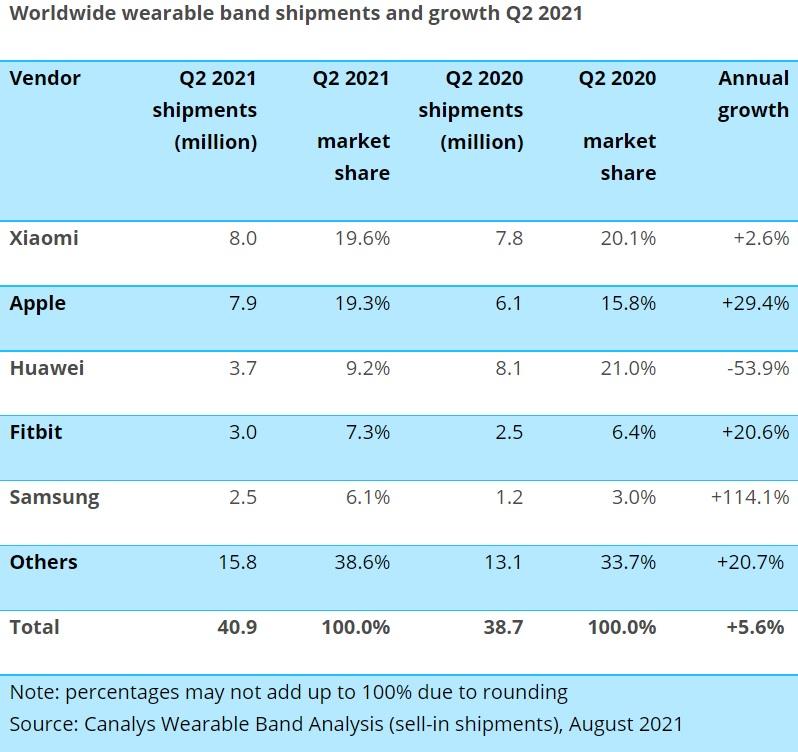 Xiaomi can thank the success of its ever-popular Mi Band/Mi Smart Band series, which sells in its millions upon every release. This year’s model, the Mi Smart Band 6, sold over a million units in the first month of its launch and had streaked past the three-million mark after just two months of availability. But Canalys reports that basic bands such as the Xiaomi Mi Band activity trackers are falling in popularity, as more users look for something that can replace their regular wristwatch in terms of looks and also offer the useful features that a smart band usually possesses.

This fact leaves Apple at the top of the pile when it comes to tallying up the figures for wristwatches alone. Apple retains the same figure of 7.9 million units shipped, as it doesn’t sell smart bands, but its market share in this particular arena shoots up to 31.1% for Q2 2021. Huawei, Garmin, and Samsung all follow while Xiaomi is stuck in lowly fifth position with just 1.5 million watches shipped and 5.7% share. But there is a silver lining for Xiaomi here, as annual growth is reported at a whopping +272.6%, so there is a future for the Mi Watch and Mi Watch Lite – maybe more so than for the Mi Smart Band 7 and its successors.

Fitbit Luxe vs Charge 5 – which is better to help you reach your exercise goals?