The Whoop band is not your typical fitness tracker. It doesn’t have a screen and it focuses on two main measurements: strain and recovery. Each night the band tracks your sleep to give you a recovery score the following morning, and then each day you get a strain score based on how much activity you’ve done. The aim is to ensure your strain score is in line with how well recovered you are, and the Whoop will coach you to achieve that.

When I tested the Whoop 3.0 all the insights it offered were undermined by the inaccuracy of its heart rate tracking, which meant my strain scores were wrong much of the time. The new Whoop 4.0 improves the sensors in the band, becoming a far more useful product in the process, though the recovery side of its tracking is still not entirely reliable.

The band also remains a fairly niche product since it doesn’t have a screen or GPS so it cannot replace a sports watch. Rather it’s best used alongside another device, which can feel like overkill, especially given the Whoop costs £30 a month (though this price drops when you commit to a subscription for a longer period).

The most important change on the Whoop 4.0 is the new heart rate sensor, which has five LEDs – three green, one red, one infrared – compared with the two green sensors on the Whoop 3.0. As well as increasing the accuracy of the heart rate tracking, the device can take measurements of skin temperature and blood oxygen saturation.

Another big change is that the new band is 33% smaller than the previous version, but the battery life remains the same at five days. You can also now wear the sensor in more ways: the Whoop Body line of clothes has pockets for the sensor so you can wear it in the waistband of your leggings or underwear, or in a bra. I wasn’t able to try the Whoop Body gear, so wore my Whoop around my wrist, forearm and biceps when testing it out.

The Whoop 4.0 is a lightweight, waterproof band that’s comfortable to wear 24/7. Even when wet after a shower I found the band didn’t become unpleasantly clammy on my wrist or arm, and it dries quickly. You can wear it 24/7 thanks to the clever design of the charger; you charge a mini battery pack that then slides on to the band to charge while you wear it. The new Whoop’s battery pack is also waterproof, so you need never take it off – you can even shower while it charges.

I found the Whoop 4.0 with its new, smaller band comfortable to wear. A sleeker design is always welcome if it doesn’t come at the cost of battery life and the 4.0 lasts the same four to five days that the 3.0 does on a charge. At times locating the battery pack charger after that period was a bit of a faff compared with just plugging the band itself in, but there were several occasions when being able to charge the band without removing it meant I could head straight for a run or other workout while wearing it instead of waiting for it to charge. 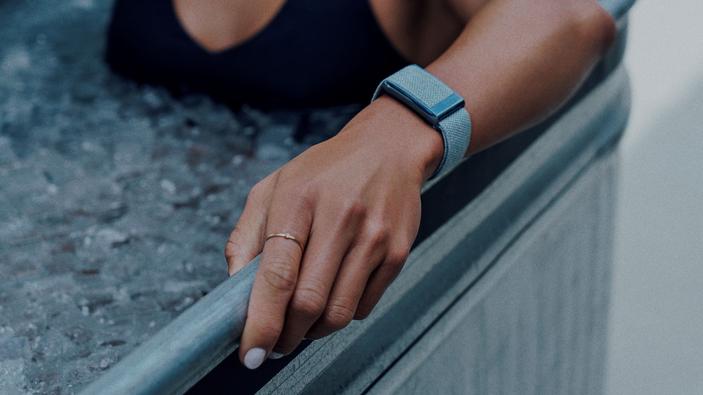 On the face of it, life is simple in Whoop world. You put your body under strain each day (scored up to a limit of 21), and each night you recover, with that recovery rated out of 100% in the morning. You can then use those two scores to judge your training: pushing your strain beyond your recovery levels in the short term will see improvements to your fitness, but you have to ensure you get enough rest and don’t overdo it for too long.

This is all that Whoop does. It won’t log your step count or track how far you went on your run or cycle. It keeps things relatively simple with these two scores, although there is a lot of data underpinning them.

Your strain score is determined by heart rate – the higher it is the more strain you’re putting on your body. Strain mostly accumulates when you exercise, but can also arise from daily activity. The inaccuracy of the heart rate monitor on the Whoop 3.0 frequently led to my strain being overestimated because the readings were far too high when I wasn’t exercising.

This problem occurs less often on the Whoop 4.0. When I wore the band on my wrist it would sometimes read a little higher than my actual heart rate and log some “fake strain” in the day, but never so much that my strain scores were significantly affected. It also didn’t log phantom workouts, something the 3.0 did regularly.

However, during workouts I did find that I had to wear the band on my biceps to get reliable readings, and after one particularly bad run where the heart rate reading from the wrist was miles too high the whole time, I moved the Whoop to my biceps permanently.

When in position there, I have found the strain recordings accurate over a long period, and you can even use the Whoop as an external heart rate monitor to connect to your watch by setting it to broadcast heart rate in the partner Whoop app.

Workouts are tracked automatically by the Whoop band and when one is detected you’ll get an alert to look at it in the app, prompting you to provide more info such as what sport it was and how hard you found it. You can also track workouts manually by starting them in the app, but the automatic system works well and there’s little to be gained by manually starting a session since the Whoop band shows no stats to look at mid-workout.

Each day you are also given a suggested strain rating in the app to aim for, which is hard to do given that the Whoop lacks a no screen and provides no guidance during a workout. However, if you start a workout in the app you can set the strain coach recommendation as a target and work towards it if you always have sight of your phone. I found that once you get a feel for how the strain score tallies up to your workouts you have a rough idea of what to aim for in your main sport. For example, as a regular runner I developed a sense of what Whoop strain score a 60-minute easy run would give me.

The recovery rating is more complicated, and I found this half of the Whoop service less impressive. The score is based on how long you slept, your heart rate variability (HRV), your resting heart rate and your breathing rate overnight, with HRV the most important factor.

The recovery score is more useful, but I had many days where I didn’t feel in tune with the score it was supplying. This contrasts with the tracking from the Oura ring and its readiness score, which is generally on point. While the Whoop 4.0 always seemed to nail the times I fell asleep and woke up, I soon found I couldn’t rely on the recovery score as an accurate indicator of the state of my body each day.

There were times when it was obviously out of whack too, such as the days after my COVID booster jab when I had side effects like muscle aches, cold symptoms and night sweats. Even though the band measured that my skin temperature was as much as 2°C above average, this was still rated as within my normal range on the health monitor dashboard, which also shows stats like HRV and resting heart rate.

On the first and second day after the jab the Whoop did give me a low recovery score, but that was it, and in the days following I was back to high recovery ratings far more quickly than I felt it actually took for me to recover. In comparison, the Oura ring demanded I enter “rest mode” for a few days following the jab and clearly marked out my high skin temperature as cause for concern, with simple advice to rest.

All of the info logged by the Whoop is at least presented in engaging fashion within the partner app. This does a good job of providing top-line info like your main strain and recovery scores on the homepage, so those looking to get in and out of the app quickly can get what they need. Then there is far more detail deeper in the app for those who want to pore over their stats. You also get weekly and monthly assessments with graphs that show how well you’re managing your strain and recovery over time.

Should You Buy It?

Once I moved it to my upper arm, the Whoop 4.0 logged reliable enough data on the strain front, and as a keen runner I found the information useful and it helped me create a balanced training plan. And even though the recovery tracking isn’t quite as accurate in my experience, it does still provide a good guideline score you can use each day to rate your sleep.

Overall, the Whoop 4.0 is an interesting product that can help very keen sportspeople manage their training, but it’s not perfect, and that’s a problem given its price and the competition it faces. While the band is free with a subscription, you pay £30 a month for the Whoop app on a six-month contract, and though that price does drop to £288 overall for a 12-month membership (£24 a month), or £324 for 18 months (£18 a month), it’s a lot of money to spend on a device you’ll probably be using in tandem with a sports watch that provides similar data. Garmin has its Body Battery measurement plus training load and recovery advice, although its sleep tracking is often inaccurate, while Polar has sleep tracking on a par with the Whoop and excellent training load analysis.

To make a more niche product like Whoop worthwhile it needs to be virtually infallible in the areas it does cover, and in my experience that isn’t the case with its recovery tracking. In addition, within this niche there is the Oura ring, which is a more accurate sleep tracker that provides readiness scores for judging your training, in an app that does a better job of providing simple, actionable advice rather than the wealth of data Whoop just throws at you.

While I like the design of the Whoop 4.0 band and app, and it does more or less deliver what it sets out to, it isn’t impressive enough that I would use it over or even alongside a sports watch.

Roaming fees are back. It’s time to switch network

How to clean your VR headset & lenses