Location
Home → Article → What is a Fitbit, and should I get one? The ultimate guide to the smartest of smart trackers

'What is a Fitbit?' you might be asking. The smart tracker watch has been getting a lot of attention, most recently thanks to being bought by Google, so you will almost certainly heard its name.

Essentially, it's a fitness-based device with some special functions to help you keep track of your daily activity. It’s one of many impressive advancements in a new realm of technology called the Internet of Things (IoT). IoT is an interconnected network of smart devices that use artificial intelligence to carry out tasks usually performed by humans. Each “thing” has a specific function and a unique identifier (UID).

Companies in many industries have invested in IoT to improve the customer experience, optimize decision-making and streamline their business model. IoT can also bolster a business’s security and make mundane and complicated tasks such as project management more straightforward.

So, what is a Fitbit? A Fitbit is one “thing” among the greater IoT network. In fact, it's one of the best fitness trackers, and it automatically performs health-related tasks in seconds that previously required careful timing and measurements. But how exactly does it accomplish these tasks? How do you use it? Do you have options? Read below for the answers.

What is a Fitbit, and what does it do?

Fitbits are high-tech smartwatches and fitness trackers that keep track of vital bodily functions. People primarily use them to track their heart rate during exercise, but Fitbit uses are surprisingly varied. You can also use a Fitbit to perform the following activities:

Fitbits look similar in style to other smartwatches on the market, but they have a much greater focus on health and wellness than any other brand. Apple and Android smartwatches are essentially miniature cell phone wristbands, with access to numerous mobile apps and the ability to send/receive texts and phone calls.

On the other hand, a Fitbit’s operating system doesn’t have access to many apps. Still, it is compatible with both IOS and Android devices and tracks your activity with more accuracy. Lastly, all of the models support Fitbit Pay, the company’s mobile payment app.

What are the different types of Fitbits?

Fitbit has two different lines of smartwatches: Versa and Sense. Versa is the standard line, while Sense can perform a few more advanced tasks:

Among the two lines, you can find four types of Fitbits: Charge, Inspire, Ace and Luxe. Let’s take a closer look at each type.

The Charge Fitbit is the most advanced type. It can perform all of the above tasks and more. It has an easy-to-use touchscreen and automatically tracks your activity levels throughout the day. The Charge is waterproof and durable, holding up under any exercise conditions. Some more expensive models also have an altimeter, which calculates how many floors you’ve walked (10 steps up equals one floor). 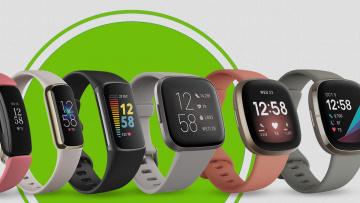 The Inspire model looks very similar to the Charge, but it doesn’t have the built-in GPS. It’s the most straightforward model of the three, with a clear focus on tracking your body’s reactions to strenuous exercise.

The Ace wristband is made for children age six and older, with a smaller and sleeker design. The touchscreen is easier to navigate and the device automatically tracks activity levels, encouraging children to develop a healthier lifestyle. It’s also splash-proof but not entirely waterproof, making it a little less durable under harsh weather conditions than the Inspire and Charge.

The Luxe has a similar thin build to the Ace, but its main audience is young women instead of children. It looks much like a regular bracelet, with a stylish jewelry-like design and several colorful options.

No matter which type you choose, you can log your fitness progress either with the Fitbit app or the Exercise Shortcuts page on the brand’s website. The smartwatches can usually identify basic exercises like walking and running based on your body’s movements, but you might have to enter unorthodox exercises like yoga into your Shortcuts log manually.

For anyone wondering how to stay motivated to workout, you can also set different measurable goals for yourself: time spent exercising, calories burned, steps taken, heart rate, and so on. The Fitbit uses both a timer and an accelerometer to calculate these numbers.

When someone can see their progress in quantifiable terms, they naturally feel more inspired to continue improving their numbers. Walking or running with a Fitbit is especially beneficial.

A consistent walking routine has also been shown to decrease the overall mortality rate of males between the ages of 65 and 74, the demographic most vulnerable to cardiac diseases.

With that being said, Fitbit’s tracking isn’t always accurate. For example, it might track a bump in the road or a sudden jerking motion as one step towards your daily goal. Minor errors like this can occur throughout the day and throw off the count.

If you want your Fitbit to track your activity as accurately as possible, measure the length of your stride and enter the number into the app or your Exercise Shortcuts log. The Fitbit will then be able to separate walking/running from other movements more efficiently.

What is the Best Fitbit?

Here’s a comprehensive list of the best Fitbits based on cost, features and accuracy.

Where Can I Get a Fitbit?

You will find the best online deals for Fitbits on the company’s main website and on Amazon. You can also buy a Fitbit in-store at the following retail locations:

Some of the newer models also have a premium membership, which gives you access to more features with a monthly payment.

The Fitbit acts as both a tracker and a motivational tool, ideal for home gym users and those out and about. It will help you monitor your progress, and once you start to see your numbers improve, the process could become addicting, and you will swiftly develop healthier habits. If you’re ready to get started on your fitness journey, the Fitbit might be the tool to help you take the first step.

Tags:  which fitness tracker is most accurate for calories burned

Many Philadelphia Area Bridges Are Crumbling, Should Drivers Be Worried? Today's top stories