Location
Home → Article → T-Mobile's new Test Drive offer lets you try its network for free, if you have an unlocked iPhone

T-Mobile has long offered a "Test Drive" promotion, allowing people on rival wireless providers to get a device to experience its network. As spotted by Light Reading and The T-Mo Report, the company has quietly taken a new step that could make it significantly easier to try out and switch carriers, allowing anyone with an iPhone XS or later on a rival network the ability to download a virtual eSIM profile through a T-Mobile Network Test Drive app for iOS.

By downloading the profile you will be given 30 gigabytes of data for 30 days for free. T-Mobile doesn't require you to cancel or postpone your current service or swap out your existing SIM card, instead letting you compare the carrier's coverage to your current provider's right from the iPhone you're already using.

One potentially big caveat: Your current iPhone needs to be unlocked from any carrier. If you have an iPhone that's on a payment plan from Verizon or AT&T, you may not be able to try this out until you pay off the remaining balance, or your phone is unlocked.

Verizon will automatically unlock phones bought on its payment plans after 60 days. AT&T, however, requires that you have paid off your installment plan. 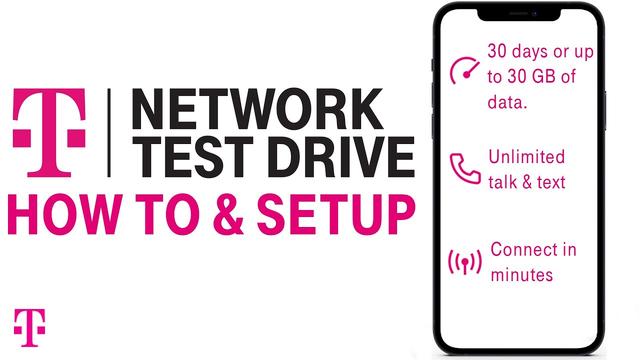 Assuming you have an unlocked device, the setup process is fairly simple -- the app guides you through the process of adding the eSIM. T-Mobile doesn't require you to enter in any credit card or payment details, with the trial automatically ending after your 30GB or 30 days are up (whichever comes first).

You still get to use your regular phone and apps, and because your regular line isn't being paused you will still be able to receive calls and messages. You can choose to set the T-Mobile line as your main data plan, however, allowing you to see how that service compares to what you already have when doing the normal, everyday tasks that you do on your phone.

The iPhone will show the signal strength of both networks in the upper right corner. Those with an iPhone 12 will also be able to connect to T-Mobile's 5G service.

By expanding to an app and eSIM, T-Mobile looks to be solving a problem that has long plagued its Test Drive offer. When it first announced the promotion in 2014, T-Mobile company loaned out iPhone 5S handsets with a week of unlimited talk, text and data. More recently it has offered a hotspot with the same 30GB of data for 30 days, though that device is limited to 4G LTE.

The issue with either option, of course, is the requirement to carry around a second device.

Having the new app "should definitely make it easier for people to take T-Mobile up on its long-standing Test Drive offer," Techsponential analyst Avi Greengart said, adding that now is "a good time for the carrier to pull out all the stops" to get people to try out its service.

The latter network, which T-Mobile says offers average download speeds of 325Mbps, will start to face increased competition later this year from AT&T and Verizon. Both rival providers have spent billions of dollars acquiring midband spectrum in recent Federal Communications Commission auctions, with their respective new 5G networks expected to be turned on at the end of the year.

Discover the latest news and best reviews in smartphones and carriers from CNET's mobile experts.