Location
Home → smart wristband → Xiaomi Mi Band 7: Latest rumors and what to expect from the next gen fitness tracker

The Xiaomi Mi Band has always been a smash hit thanks to its big spec sheet and small price tag – and new versions have landed each year like clockwork.

Unlike a lot of cheap trackers, it can actually deliver on performance and offers strong accuracy to make them worthy of a place on your wrist. And it regularly earns a spot on our list of the best fitness trackers.

The Mi Band 6 launched in March 2021, landing with a punchier screen and not huge amount more when we compared it to the Mi Band 5. It was a good Mi Band instalment, but it certainly left us wanting more from it in terms of an update.

So our attention turns to the next Mi Band, which we expect to land in 2022 at some point and based on Xiaomi's track record, will likely be called the Mi Band 7.

Xiaomi didn't make wholesale changes with the sixth generation, so should we expect something more radical with the Mi Band 7?

We've taken a look at what the rumor mill is throwing up and give you our hopes for what we want to see on Xiaomi's next budget fitness tracker.

There seems to be a fair bit that has already surfaced about what we can expect to see from the Mi Band 7 and that includes the name, some indication of screen changes and a big new sports tracking feature.

A lot of the juiciest stuff has come courtesy of Logger and from some insightful digging around the Zepp companion app, which is used to pair the Mi Band. Logger discovered the name Xiaomi Smart Band 7 along with device model numbers M2129B1 and M2130B1.

That code also uncovered appears to suggest a screen size and resolution change for the new Mi Band. The Mi Band 7 screen should feature a 192 x 490 pixel resolution screen, which would be an upgrade on the 152 x 486 resolution one packed onto the Mi Band 6. That's likely to be an AMOLED-type display just like the one included on the 6 and it will offer an always-on display mode.

The same digging around in code also uncovered evidence of the type of animated and static watch faces (pictured above) we can expect along with the black and white watch faces that will be offered when the screen is in that always-on mode.

It's also dished out icons attached to third party apps when they land as notifications on the tracker. So the likes of Spotify, Strava, Nextflix and Gmail are all accounted for.

This is where we might see some interesting changes. The Mi Band 6 offered a huge collection of sports and activity tracking profiles and it looks like the same will be the case on the 7 based on the same discovered code.

What's most interesting here is the possible inclusion of built-in GPS. Previous Mi Bands have offered connected GPS support, though based on our experiences, it wasn't the best support. Mentions of built-in satellite navigation support suggest big changes are coming. 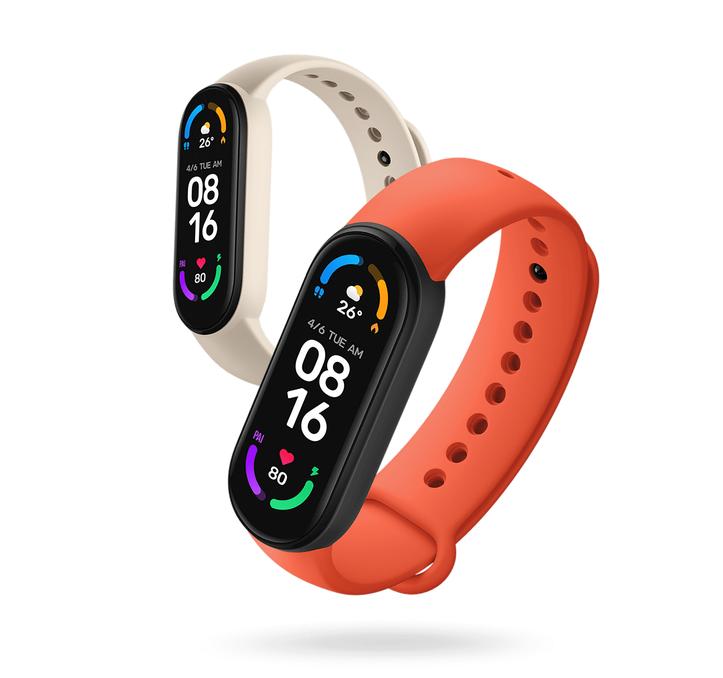 It seems we can expect some improved smartwatch features here too, including the addition of a smart alarm and smart wake up features, which isn't new to wearables in general, but does mean the 7 will pick the optimal time to wake you up in more natural way from your light sleep.

It seems Xiaomi will also add a passcode feature to better protect your Band from others getting in to use and view your stats and data.

The Mi Band has always promised really strong battery life and it sounds like things are going to get even better too if the rumored changes are to be believed. According to MySmartPrice, who spotted the Mi Band 7 had popped up on Belgium's SGS-CEBEC website and the Indonesia telecom website, the new Band will be packing a 250mAh capacity battery.

That's a significant jump up from the 125mAh one featured in the Mi Band 6, which promised up to two weeks of battery life.

That could mean more battery life or it could mean that Xiaomi has needed to increase the battery to cope with the additional features it's going to include and may end up sticking around at that two-week battery number. Adding GPS would no doubt hamper the battery performance if used on a regular basis as is the case on all GPS-packing devices.

It does sound like it will include a series of battery modes to make sure you get the most time out of the 7 in between charges. There will apparently be power saving, ultra power saving and a battery saver mode. The latter it seems will only record sleep and step counts when it's enabled.

So we've dealt with what the rumor mill has to say, now what do we actually want to see from Xiaomi's next generation Mi Band? Here's a few things that come to mind for us.

1. Time for a new design

It's time Xiaomi. It feels like we've had the same-look band and screen to stare at for a few generations now. Yes, you can get it with a few different color straps and the screen is still nice and punchy, colorful and bright, but it feels like we are due something a little less ordinary to glance down at and have peeking out from a shirt sleeve.

The Mi Band 6 was near enough identical to the Mi Band 5 and if you picked it up with the black band, it's just felt a bit drab looking. It is possible to make a cheap fitness tracker look attractive. Take something like the Samsung Galaxy Fit 2 for example. The band and screen combination on the Samsung tracker works a lot nicer, particularly with subtle elements like the way the screen meets the band.

There's certainly room for the Mi Band to be more of a looker. Whether that's a priority for Xiaomi on its cheap tracker, it's not clear, but we hope it's firmly on the agenda for the Mi Band 7.

Oh, PAI. The Personal Activity Intelligence scores you receive for spending time in elevated heart rate zones. In essence, it's a great feature that moves people away from thinking about doing lots of steps to making sure you're getting your heart pumping on a regular basis. Except the feature feels very separate from everything else that Xiaomi Mi Band does as a fitness tracker.

What we'd like to see is PAI being brought more into the picture and integrated into Xiaomi's overall goal to get you moving more and staying active. Whether that's through prompts, explaining when you're close to your PAI goals or how you can reach a PAI goal, those would be some small steps to make a potentially really useful existing feature a more worthy one to have at your disposal.

There are fitness trackers that sit in and around the price of the Xiaomi Mi Band that are capable of tracking outdoor activities without having to piggyback off your phone's GPS to see routes in the companion app post-run or ride.

We feel like it's time that Xiaomi managed to get onboard GPS onto its tracker to make it less reliant on having to boot up that companion phone app, which has often been a problematic experience for us on a few iterations of the Mi Band from both a connecting and accuracy point of view.

We obviously wouldn't want it to impact on the size of the hardware, so if it's introduced in a way that still keeps things relatively light and comfortable, that would be ideal.

We think it's fair to assume that given the price the new Mi Band will likely come in, thoughts of it packing an ECG sensor like an Apple Watch Series 7 or a Fitbit Charge 5 seems unlikely. That doesn't mean we wouldn't like to see new sensors added and we know that a body temperature sensor was rumored to land on a previous iteration of the Band, which would be a useful one to add.

Fitbit, Oura, Whoop, Huawei and even Mobvoi's Ticwatches have added temperature sensors, all with very mixed results we should say. They're also not regarded as medical features on those rival devices, but when they do work, they can offer a useful piece of information and insight into your general wellness and could indicate that something might not be quite right.

We haven't seen a Xiaomi wearable pack any sort of temperature sensor yet, so maybe the Mi Band 7 could be the first device to make it a reality.

The Mi Band does of course already track sleep and initial tracking issues aside, it does a pretty good job of it as well. That's not only tracking that sleep time, but also offering some useful sleep quality analysis and flagging when you've gone to bed too late or you're not getting enough sleep.

As far as matching what the likes of Fitbit and wearables like the Oura Ring can deliver on the sleep tracking front, we'd definitely say there's scope for the Mi Band to get better in terms of what it can offer when you take it to bed with you. We'd like to see more done in terms of drawing a relation to recovery and readiness with sleep like we've seen on the Xiaomi Mi Watch, with Fitbit's Daily Readiness scores, Garmin's Body Battery energy monitor and Oura's overall sleep tracking.

It will likely need to harness heart rate variability measurements to generate those energy level readings, which this tracker is already capable of doing when it tracks stress, so hopefully this is a relatively straightforward feature that could be introduced on the Mi Band 7.

Tags:  how do you use the heart-strong fitness tracker

3G Service Is Going Away Next Year. Here's What That Means

Nextear Wireless Earphones Are Earbuds Worth a Second Look_