Apple may not market the AirPods Pro as earbuds made for runners, but for anyone that’s plugged them into their ears to stretch their legs down the park or on the treadmill, they actually make a pretty good set of running headphones.

The sound quality is solid, they possess strong ANC powers when you want to block out ambient noise, and a sweat and water resistant design means they offer some protection against the elements. Plus, if you can find a snug fit, the AirPods Pro are buds that stay secure whether you’re on a run or relaxing at home.

The AirPods Pro aren’t perfect running earbuds, though, and there are a lot of features we’d like to see from future AirPods to make them more suitable for exercise. Apple already offers the Beats Fit Pro and Powerbeats Pro as more workout-friendly options, so it’s not a massive stretch to suggest those buds could influence future AirPod Pro models.

It’s rumored that we’ll see the second-generation in the AirPods Pro line later this year. So, if Apple decided to give the AirPods Pro 2 more running appeal, what would it have to do to give them that added appeal? Having spent a lot of time run-testing Apple’s current AirPods Pro and a host of different sports headphones from Jabra, JBL, Beats, Sony, Jaybird and Shokz, here’s what we think needs to happen.

1. Up the sweat protection

The current AirPods Pro offer an IPX4 water resistance rating, which means you’re putting something in your ears that’s splashproof. However, there are a host of other fitness-focused true wireless earbuds that offer stronger waterproof ratings and cost less than the Pro.

While we can’t say we’ve encountered any issues with that level of protection running with the Pros, the idea that they could be better protected against sweat, rain and moisture in general would be welcomed.

Apple recently made the move to give its Watch 7 smartwatch an improved dustproof rating, so it’s not out of the question that it’ll bolster the ruggedness on its popular wireless earbuds too.

It shouldn’t stop with the buds themselves either. Other headphone-makers like Jaybird have added that extra durable protection to cases too, and it would be good to see the pocket and running belt-friendly case Apple already offers with the Pro get some extra protection too.

2. Give us some physical volume controls

A very simple suggestion for Apple, but it’s one based on the simple fact that runners definitely prefer physical controls. They’re easier to get to grips with, especially when you’re running at your quickest. Yes, Apple does offer Siri voice controls, but sometimes keeping things simple is often the best option.

The stem-based touch controls on the AirPods Pro actually work well, but unlike Apple’s Beats Powerbeats Pro and a host of other sporty true wireless earbuds, they don’t offer the ability to physically adjust volume controls. 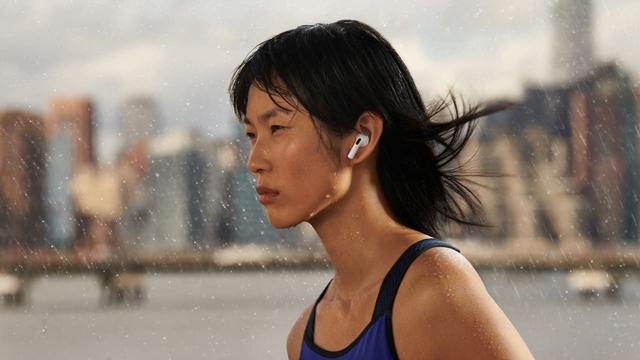 Granted, the Powerbeats Pro have more space to play with, but there are also buds that are a similar size and stature to the AirPods Pro that have managed to successfully implement physical volume controls. Jabra’s Elite Active 7 are a good example of that. Something as simple as pressing and holding the stems to adjust volume, would be the kind of addition runners would absolutely eat up.

Another way Apple could make the AirPods Pro controls easier for runners to use is by implementing a similar kind of technology to the Wide Tap Area featured on the Sony LinkBuds, which allows you to tap your face to adjust your music playback.

This gives you a larger surface area to work with, so you’re less likely to miss the buds themselves while you’re running. We’ve already seen Apple patents that describe futuristic gesture controls, and now that Sony has proven it possible, we’re hopeful that the AirPods Pro 2 will improve upon their predecessors’ touch-sensitive stems.

Apple patents that could relate to future AirPods Pro models have suggested the company is looking to offer some fitness tracking features with its future earbuds.

Apple has already planted a motion detecting accelerometer sensor inside of the AirPods Pro, and at WWDC 2020, the company announced it was opening up its Motion API on the AirPods to enable developers of fitness apps and games to make use of the head tracking used for the buds’ Spatial Audio feature.

Bringing biometric and tracking sensors isn’t new territory for truly wireless earbuds. Jabra and Amazfit offer buds that pack in optical heart rate monitors that work well - as long as you manage to get a reliable and precise fit throughout your run. If you don’t, they’re not as accurate as you’d want them to be.

Amazfit also used accelerometer motion sensors to track runs via the ears, though unsurprisingly, the tech wasn’t extremely reliable and ever going to rival a GPS running watch for accuracy.

What we’re saying here is that, while it would be great to see some form of run-tracking feature included on the Pro 2, it would need to be reliable, compelling and offer something better than what other run-tracking devices can already offer.

4. Focus on coaching and posture

Another way Apple could introduce useful running smarts to its next set of AirPods Pro is by borrowing some Apple Watch features. Apple’s smartwatch offers one of the best run tracking experiences you can find on a wearable right now, with a built-in heart rate monitor, blood oxygen monitor, and reliable GPS. We’ve already heard rumors that the AirPods Pro 2 will be able to tell you your blood oxygen levels, and adding in heart rate tracking would make them ideal earbuds for runners.

However, there’s a great deal more being done in the wearable and hearable space around the idea of helping us pay closer attention to running form and technique. Posture is a part of maintaining that good running form and it’s not unfeasible to think that Apple could explore posture monitoring from higher up the body and use that information to offer insights into form. The Amazfit PowerBuds Pro included posture tracking features using similar accelerometer motion sensors already present in the AirPods Pro.

The idea that the AirPods Pro 2 will be able to coach you through your workouts seems even more feasible when you consider that Apple has filed a patent for a pair of in-ear headphones that use inbuilt sensors to "gather orientation information such as accelerometer measurements during user movements".

Apple already has a pretty good platform in Fitness Plus where it leads users through indoor running workouts, so bringing elements of that together with additional motion data you could generate from Apple’s earbuds could be a recipe for a more comprehensive tracking experience - and not just for how far or quick your run but also how you run, too.

5. Throw in some hooks

There’s no getting away from the fact that the fit of the AirPods Pro isn’t going to work for everyone. The only thing keeping the AirPods Pro securely in your ears are their silicone ear tips - and that becomes even more problematic if you decide to add swift running movements into the equation.

While the AirPods Pro definitely feel secure enough for casual runs where you’re not chasing a PB or racing, there’s always that fear they might fall out when you increase the speed.

If you look around at the truly wireless earbuds that do feel like a better fit for picking up the pace, there’s usually a key design element in place - and that’s ear hooks or wing tips. This approach usually means earbuds feel better locked into the ears and with the right pair, will reduce the chances of them falling out.

A simple solution for Apple could be to include its own interchangeable ear hooks or tips that you can reach for and slip on when you do want to run.

Non-detachable earfins could also be built into the design of the AirPods Pro 2. It’s rumored that the next generation of Pro earbuds will come with a radically different design to their predecessors, getting rid of the protruding stems altogether.

That would mean Apple would need to find a way to keep the AirPods Pro 2 securely in the ears without the stabilizing effect of the stems - and integrated fins would be a great way to achieve that security.

Here Are All the New Bands and Cases Apple Just Released for Apple Watch Series 7, iPhone 13, and iPad

Galaxy Fit2 Is Back! – Here Are Reasons Why Everyone Should Own a Fitness Tracker