Amazon wants to be your next Fitbit. Last year's Halo Band was the company's first entry into fitness tracking, but this year's Halo View, announced at an Amazon devices event today, feels a lot less weird. It's more affordable, adds a color screen, and drops that creepy, always-recording microphone (which did have an off switch, but it was strange). The $80 band, coming at the end of the year, will include a year of Amazon's subscription health service for Halo, which is adding Nutrition and Fitness modes like meal planning and video workouts. It sounds like a pretty complete package. But do you want Amazon to be your fitness provider?

Now playing:Watch this: Amazon's new Fitbit competitor has a color screen and...7:38

Halo View is a pretty familiar-looking device: the band has a bright AMOLED color screen, much like the Google-owned Fitbit Charge 5 and Luxe (or plenty of other fitness trackers). The Halo View's features look very competitive, too: seven-day battery life, 50-meter water resistance for swimming, optical heart-rate sensor, sleep tracking and blood oxygen (which can record in the background, or be used for spot checks). Skin temperature can be tracked at night and only shows changes relative to previous nights, similar to how the Fitbit Sense and Oura Ring track temperature.

Read more: Amazon's smart products lead the market even as trust in the company lags

But notably, it removes the microphone that was a central feature of the first screen-free Halo band, which was used to continuously record and analyze emotional tone. That feature, while weird, is still available via Amazon's Halo phone app, along with camera-based body analysis and body movement tools that launched last year. The app assumes you're using a Halo band alongside it, but some features like camera-based body analysis work without having a band at all.

The biggest change with Halo View over last year's Halo band is the color touchscreen, which will be able to show stats, start workouts, show the time (with different watch faces), and run a couple of stopwatch and timer features. The original Halo Band had no screen, which meant that you'd have to check the app for fitness/health stats. 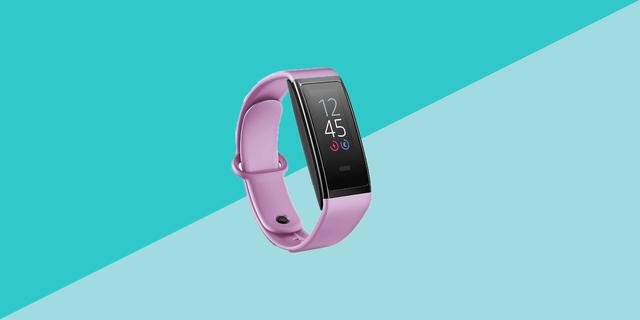 The Halo View band takes 90 minutes to charge, but will last for a week. I haven't tried one yet, but the pictures of the band look very much like the types of color-screened trackers you can find pretty easily on Amazon already. There's also a new PIN setting to hide fitness data from showing up on the band unless the PIN is entered.

Extra accessories include multicolor sport bands for $15, and fabric, leather and metal options cost $30 each. (UK and Australian prices weren't announced, but $80 converts to about £60 or AU$110.)

I haven't worn the band yet, but it seems to have a chunkier look than Fitbit's latest Luxe and Charge trackers. Also, I don't know yet how the display will look in bright sunlight.

Amazon's Halo trackers work without a subscription, but much like Fitbit, a subscription to a fitness/health service is necessary to take advantage of longer-term tracking stats and analysis, along with workout and coaching services. Amazon's adding video workouts and nutrition planning to the $4-a-month service at the end of this year and into early 2022 that will aim to fill out more parts of the Halo package. Fitbit Premium, which offers some similar features to Amazon's subscription (but a much larger social network), costs $10 per month.

The Nutrition service won't be available until January 2022, but will have meal planning guides for different diets, drawn from Weight Watchers, Lifesum, and (surprise) Amazon-owned Whole Foods, along with shopping lists and ingredients that will sync to Alexa. Does this sound like a way to lubricate the Amazon Halo-to-Whole Foods connection? Yes; yes, it does.

Meanwhile, a series of video workouts called Halo Fitness will launch by the end of the year, most likely timed to the release of Halo View. The workouts look like the type of high-production video workouts that Apple Fitness Plus has, and will also get a similar on-screen readout of tracker data, such as heart rate, in early 2022. The workouts will cover cardio, strength, yoga, outdoor and mobility classes to start, according to Amazon, with announced creator partners including Michael Hildebrand, Elena Cheung, Elizabeth Andrews, physical therapist Dr. Jen Fraboni and bodyweight and mobility training specialist Francheska Martinez. The videos will play in the Halo app, and will be able to cast via AirPlay or Chromecast to tablets or TVs.

Is it priced aggressively enough?

The $80 price for the Halo View band isn't the lowest we've ever seen for a fitness tracker, but the included year of the subscription service makes it very competitive with Fitbit's latest Charge 5 tracker that comes with six months of Fitbit Premium for free. It's a necessary move if Amazon wants to grow its health and fitness footprint, and not surprising, considering how low-priced most of Amazon's other products end up becoming. Inevitably, at some point, it'll be on sale (based on Amazon's other products).

Last year's Halo Band felt like an experimental device that worked well enough, but didn't seem great enough to recommend over other options. We'll have to see if the Halo View can win out over the competition when it arrives later this year.

The information contained in this article is for educational and informational purposes only and is not intended as health or medical advice. Always consult a physician or other qualified health provider regarding any questions you may have about a medical condition or health objectives.

Fitness SmartwatchesAmazon FitnessNotification on Notification off Mobile
Tags:  how to set time on smart fitness bracelet

5G is fast, but not perfect. Here’s why you might want to turn it off sometimes.