If you’ve seen an Apple Watch since the line debuted, you’ll likely know what to expect with the Series 7.

Regardless of which material you opt for, the unit is square, with rounded off corners. The big draw of this latest model is the thinner bezel around the screen. In fact, since it wraps around the main enclosure, it’s almost bezel-less, and instead slopes down to the outer shell.

Apple says the display offers 50% more total screen area vs the older design (seen on the Series 3). It’s less noticeable against the Series 6, Series 5, or Series 4, but there’s definitely an increased canvas for your content. Apple has smartly tweaked the UI on the Series 7 to allow WatchOS to make use of the display in subtle ways—like larger buttons.

The Series 7 is slightly larger than its older brothers, too, albeit just by a millimetre. It’s hardly noticeable, but the key thing for long-term Apple Watch users is that your collection of bands will still fit.

Apple Watch Series 7, like its predecessors, is the Swiss-army knife of smart watches. WatchOS is a growing ecosystem, meaning if you’ve got an iPhone, you’ll find plenty of your existing apps already have Watch versions.

The good news is that the Apple Watch Series 7 really does pack a bit of everything into its design. Blood oxygen monitor? Check. Fall detection? Check. ECG? Yep, all there, and all with Apple’s attention to UI detail. Sleep tracking is included, too, but that’s less successful—more on that shortly.

As far as fitness tracking, the Apple Watch offers a growing list of exercise options. You’ll find tai-chi, Pilates, dance, hiking and plenty more alongside the more standard running, cycling and walking options. It’ll even interface with compatible machines at your gym, so long as they use Apple’s GymKit tech. 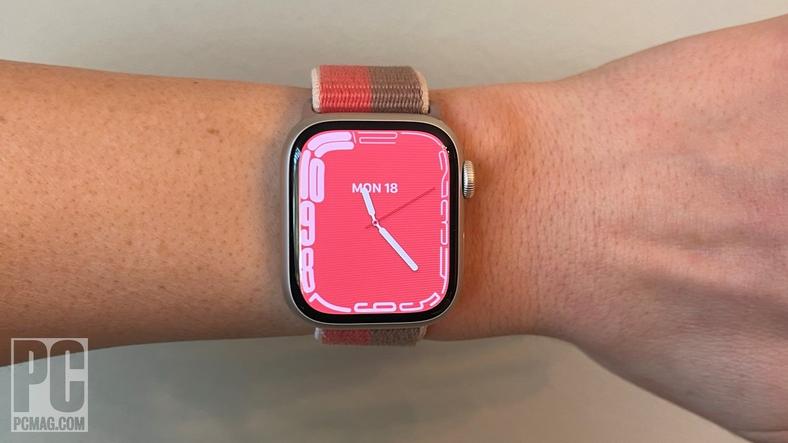 You can install third-party options, too, with the likes of Strava offering native WatchOS apps.

You can also connect the Apple Watch directly to your Bluetooth headphones of choice, with music streaming from Apple Music and the likes of Spotify, as well as podcast functionality. With 32GB of internal storage, you can save albums, playlists, or your favourite shows to enjoy without taking your phone with you. Although whether or not you'll want to watch them on a screen that size is questionable.

We tested the Apple Watch Series 7 alongside a Series 5 and the Fitbit Charge 5, and all returned a similar step count and distance tracking, both via Apple’s running tracker in the Workout app and Strava’s own approximation.

WatchOS has been around for a while now, but it still has a steeper learning curve than iOS. Faces can be customised, but there’s no way for third-party developers to add new ones. And while the Apple Watch Series 7 packs a new S7 processor, you’re unlikely to notice any boosts to performance from the Series 6.

The only area where Apple appears to be running in place is with the Apple Watch’s battery life. You can expect close to 20 hours on a single charge, but you can get closer to a day and a half if you’re happy to turn off the always-on display. Considering the Apple Watch’s feature set that’s solid, but given rivals like the Fitbit Charge 5 can go the best part of a week without needing to be plugged in, Apple is lagging behind.

If you’re tracking your daily activity and charging at night, that’s no issue, but if you’re looking to track your sleep then you’ll need to charge before bed. Even then, Apple’s Sleep app is a little on the clunky side and there are better third-party options out there.

Charging itself has also caught many new buyers unaware. While the Series 7 ships with an updated charging “puck” that can get you to 50% battery in half an hour, it doesn’t come with a charging brick. Since it has a USB-C connector, you’ll need a USB-C charging brick, too, or a compatible charging port.

The Apple Watch Series 7 adds a bigger display and fast-charging, but is stopped short of greatness by underwhelming battery life.

That’s a shame, but it remains one of the best fitness trackers out there—so long as you’ve got an iPhone. WatchOS is a platform that’s constantly getting new features, and the Series 7 is the best way to experience all it has to offer.

With a higher cost than the likes of Fitbit, though, you may want to look for a clearance offer on the Series 6, or even the still-excellent Series 5.

Hardcore runners may lean toward a Garmin Fenix 2, with its more detailed GPS navigation, Fitbit’s Charge 5 is an excellent alternative — and both work with Android phones.

Finally, there’s the Amazfit GTR 3 Pro, which offers a large, bright display and its own built-in voice assistant, too.

www.makeuseof.com Unlocked vs. Locked Phone: Which One Should You Buy?

Should you upgrade to iPhone 13? We compared the last five years of iPhones to find out