Amazon says it didn't remove the microphone for the Tone feature from its new Halo View fitness tracker due to privacy concerns, but rather because it was listening to what customers wanted. And while many experts agree with Amazon's statement to ditch the feature, they say whether the company will admit to it or not, privacy is still part of the company's decision to offer an alternative.

The new Halo View fitness band was announced during Amazon's September hardware event last week. It improves on the first generation band by adding an AMOLED display, giving users instant access to health data without having to pull out their phone.

The new band doesn't have a microphone like the original version, and it is also priced on the lower end compared to the best fitness trackers on the market. This could arguably also make this band compete successfully in the market, some experts believe.

In a statement to Android Central, an Amazon spokesperson said that the company "didn't remove [the microphone] based on [privacy] concerns."

The original Halo health tracker debuted in December 2020, even after a scathing report that revealed privacy concerns about the tracker. The original device did not have a display but had a microphone that would collect some of the most intimate information that has ever been collected from a consumer health gadget — a customer's spoken thoughts. This was part of what the company called Tone, which was an opt-in feature that tracked the tone of a user's voice to understand their emotional state.

Many privacy experts said that the information collected by Tone was not actually helping consumers learn anything, but rather was another way for Amazon to gather more of your data.

Tone feature was just not that useful

Nishanth Sastry, a professor at the University of Surrey in the U.K. and specializes in the privacy of tracking technologies, agrees with Amazon and says in an interview that the Tone feature was very divisive in that some found it very useful, while others "thought it was creepy."

"A quick Google of the reviews for the Halo Band will show how opinions were quite evenly split," he says. "Clearly Amazon thought it was a good idea to also offer a more conventional alternative which does not have the creepy/useful Tone feature."

He says that Amazon eliminating the feature came from customer feedback, but that the feedback was likely about how customers had privacy concerns.

IDC's research manager of worldwide device trackers, Jitesh Ubrani, adds that the Tone feature was probably what most customers didn't really care for.

"Sure, customers would know that at some point in the day they sounded anxious or energetic, but ultimately what's a customer supposed to do with that information?" he says. "Moreover, the removal of the microphone helps further reduce the cost of the device while alleviating any privacy concerns or negativity that buyers may have felt."

Avi Greengart, founder and lead analyst at Techsponential, agrees and in an interview notes that it was removed "partly because it is controversial and because, let's face it, Tone is not a common health feature in the fitness category."

"Removing it and lowering the price makes the Halo View more competitive, not less," he says.

Amazon's original device was released to the market at $100, but the new version is slightly cheaper at $80. At the time, the original band was late to enter the fitness tracker market, which was already dominated by the likes of Apple and Fitbit, and with the no-screen display and a rather invasive tracking, it was hard to convince consumers to want to buy the product. 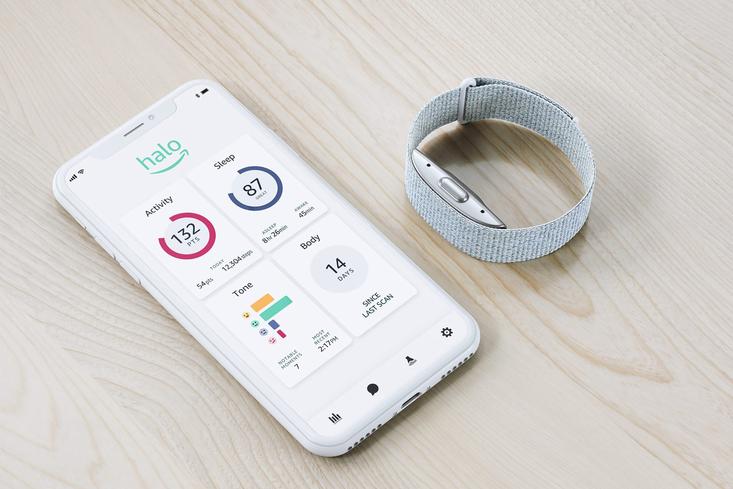 Greengart notes that on a whole, Amazon doesn't specifically target premium market segments and that several of its device lines are filled with products that are sold at incredibly low prices like the Echo Dot, Fire HD tablets, and the Fire TV streaming sticks.

"However, it is worth noting that Amazon is hardly the lowest cost fitness band on the market; Xiaomi, Amazfit, and others sell fitness bands for $40-50 on Amazon," he says.

Currently, there aren't many fitness bands in the market that do target a low-end market. The Apple Watch Series 3 is priced at $199, Fitbit's Inspire 2 (not counting its kid's trackers) is $99, and Samsung's Galaxy Watch 4 is $250.

Anshel Sag, a senior analyst at Moor Insights & Strategy, agrees in an interview noting that there are many basic fitness bands out there but believes there's an opportunity here for Amazon.

"I believe that Amazon sees an opportunity in this market for a U.S. manufacturer and wants to offer an entry-level price to its customers," he says.

By having a second option as well, Sag says that Amazon can cater to more consumers.

Ubrani added that this product will help Amazon gain a better foothold in the wearable market.

"This is where Amazon has a leg up on the competition since brands like Fitbit still tend to rely more on hardware margin rather than services. The low upfront cost of the Halo View might convince more users to sign onto Amazon's ecosystem of hardware and services," he says.

Where Amazon got it right is by adding a screen, Ubrani says, and that the original Halo kept it from breaking into the mainstream. The Halo View is finally on par with the competition while also improving user experience, he says.

Sastry agreed with Ubrani, saying that adding the screen makes this device more conventional to users.

Privacy concerns will always be there, especially with health trackers

But by making a more conventional product, Sastry says that this will mean Amazon will still be collecting more data from people.

"Amazon gets more data from more people and it is health data, which previously it did not have. Currently, all is fine, until Amazon decides it will change its data policy and starts using this new source for powerful new algorithms to sell more stuff," he says.

Amazon did write a white paper explaining the privacy around the original Halo band.

Sastry says that the company has also promised to never sell user data to others and that in the previous version, it was only processing the voice data on the device; it doesn't mean that privacy concerns don't exist.

"However, as more of us start to give out health data to one of the biggest data harvesters out there, there may be interesting/dangerous developments in how Amazon could use that to sell more stuff to us," he says.

Greengart agrees with this, noting that any product that is designed to collect and track personal health data is a privacy concern.

For example, if someone was pregnant, Sastry asks, would it be possible for the tracker to detect changes in one's body metabolism and advertise targeted products to the individual?

And Sag notes that while Amazon wrote an entire document about Halo's privacy, this is clear enough "that privacy is still very much a concern."

Have you listened to this week's Android Central Podcast?

Every week, the Android Central Podcast brings you the latest tech news, analysis and hot takes, with familiar co-hosts and special guests.

Tags:  how to remove fitness tracker from band

Six compete for four seats on Oconomowoc School Board

"Rotten Tomatoes Is Wrong" About... Man of Steel