After a ‘disastrous’ travel day of cancelled trips, Holly Weiss felt exhausted walking off the plane and sat down to rest.

She thought the stress of work and travel had exhausted her.

WATCH IN THE VIDEO ABOVE: Aussie’s at risk of heart disease

But when she woke from a nap later, she felt her heart pounding and struggled to breathe.

She put her smartwatch on and noticed her resting heart rate was at 140 beats per minute.

“It’s twice as much as it should be if you’re sleeping,” the 56-year-old from New York City told TODAY.

“I went to the emergency room and that’s where I got diagnosed.”

Holly was in heart failure and felt stunned she was so ill.

While Holly’s symptoms felt most severe after the flight in August 2019, she had actually been experiencing some warning signs prior to that day and didn’t realise it.

“I was retaining fluids. So my shoes started to not fit anymore, rings on my finger I managed to get off and didn’t put back on, my belly was swollen,” she said.

“I had shortness of breath occasionally like certainly with any kind of exertion but also sometimes even when just standing up to speak.”

At the time, Holly worked long hours as an attorney and thought that stress and aging contributed to a lot of her symptoms.

She started skipping things that felt too difficult.

“I basically stopped exercising because that was too hard,” Holly said.

“I started having a lot of trouble with the normal things like going up the steps.

“I started avoiding the subway.”

Sometimes she felt really overheated and like her heart was pounding in her chest.

But again, she dismissed the signs as part of getting older.

“I attributed them to not taking great care of myself,” she said.

“Being a woman of a certain age, people talk about these signs — you get hot or you get physically weaker.

“I just assumed that was what was going on and didn’t want to take the time to get anything checked out.”

When the doctors in the emergency department spoke to her about heart failure and the possible need for a heart transplant in the future if she didn’t make some changes, she decided she would do what she could to bolster her health.

“By all accounts I was in a really bad state,” she said.

“I was seen by a bunch of people who told me that your life is going to have to change.”

She started medications but committed herself to eating healthy, exercising more and reducing her stress.

“I could have gotten spun into a complete negative world but instead I was really encouraged because they were like, ‘This is up to you’,” she recalled.

“I was like, ‘Challenged accepted. I will do whatever it takes because this doesn’t feel right.’”

Who is at risk of heart failure?

While heart failure sounds like the heart isn’t working at all, that’s not entirely accurate. 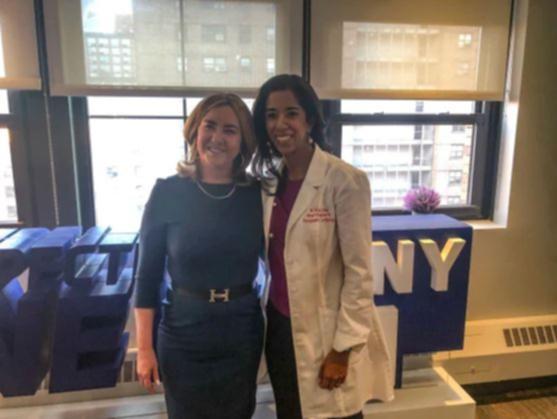 Heart failure occurs when the heart performs at a reduced capacity.

“I like focusing on decreased heart function. It immediately opens the door to getting better,” Dr Lala told TODAY.

“I’m not trying to reduce the seriousness of the diagnosis.

“But I do think it’s important to engage patients in a way that doesn’t leave them feeling hopeless.”

Risk factors for heart failure include:

“All of these when present, particularly in women, portend higher risk of heart failure,” Dr Lala said.

But women have some risk factors other than traditional ones including:

“It can be a physically stressful event as well, so such as a death in the family or an abrupt accident or something like that.

“You can see a sudden weakness in the heart function that most often thankfully is reversible.”

Holly said her heart failure was “idiopathic,” meaning the cause is unclear.

But she undertook numerous lifestyle changes that boosted her health.

“She was placed on excellent medical therapy and she was very adherent.

“She followed up regularly. And she went from a heart muscle function that was exceedingly weak to one that is normal now.

“I commend her for that.”

Preventing heart failure includes many of the lifestyle changes Holly made.

People can reduce their risk by:

“We want to do that as early as possible,” Dr Lala said.

“But it’s also never too late to start.”

As she built up her strength again, even taking a stroll felt tough at first.

“I remember having a really hard time walking and I knew it was going to take a while,” she said.

“I just focused on moving forward.”

She even switched careers to reduce her stress and is no longer at a law firm.

Instead, she has been mediating and arbitrating cases assigned by the federal courts.

“One of the first things I asked one of the doctors who saw me was, ‘When do you think I can get back to the office,’” Holly said.

“I saw the look on her face that was like, ‘Are you kidding me.’ And I realised I needed to change my outlook pretty quickly.”

She also founded a nonprofit called Stand Up Girls, which teaches stand-up comedy to girls from underserved communities to help them build confidence.

“I did a little bit of comedy late in life and thought I should have done this earlier because it’s really helping me feel empowered and helping my communication skills,” Holly said.

She hopes her story encourages others to seek help even if the symptoms seem mild.

“Go get checked out. What’s the worst that can happen? They say there’s nothing wrong with you.”

Tags:  how to operate the smart bracelet