Every second matters before an earthquake strikes, and some Washington residents might get a few more now that a new earthquake-warning app is available.

In Washington, there are already two warning systems in place, but the MyShake app provides a third and possibly quicker option, the state said. The app, first launched in 2019, sends alerts in California and Oregon. It became available in Washington on Wednesday.

The MyShake app can be downloaded for free through the Apple or Google Play app stores.

The app was created by seismologists and engineers in California and funded by the California Governor’s Office of Emergency Services.

“Accessing tools such as the MyShake app will help you, your family and community be better prepared and have a more positive outcome in the event of an earthquake,” Christina Curry, the office’s chief deputy director, said in a news release. “We are pleased to share this resource with our West Coast neighbors.”

Alerts based on information collected by the U.S. Geological Survey’s ShakeAlert earthquake-warning system were previously available through the Wireless Emergency Alert, or WEA, system and on Android phones’ built-in alerting system. 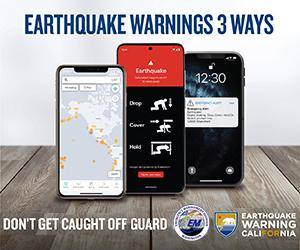 The USGS system went active in California in late 2019, Oregon in March 2021 and Washington in May. The alert system saw a delayed rollout, however, because the federal agency left it up to states to implement the system locally.

Now, the ShakeAlert warnings are available to more than 50 million people across the three states.

WEA was built as a universal alert system meant for mobile devices new and old, according to Harold Tobin, director of the Pacific Northwest Seismic Network. This is why the system doesn’t reach everyone uniformly, whereas MyShake and the built-in Android system have a lower alert threshold and rely on cellular service and Wi-Fi.

“The main message is that redundancy is also good — 99.99% of the time nothing is happening, but when an earthquake happens you want the alert to actually get to you,” Tobin said.

The system relies on 1,150 seismometers placed along the West Coast that can pinpoint and relay the location of an earthquake.

Some 394 seismic stations are scattered across Washington, about 230 of which contribute data to ShakeAlert, according to the University of Washington.

Seismometers closest to the epicenter will detect the initial, faster P-waves and transmit that information before the slower, more destructive S-waves arrive.

Living farther from the epicenter could make the alert slower. Living close to it could make it virtually meaningless.

Residents in Seattle, Tacoma and other cities along Puget Sound could get up to a minute’s warning should a shift in the Cascadia Subduction Zone cause a massive offshore quake.

While many seismometers are concentrated along the coast, the best and fastest way to detected offshore quakes is through the installation of offshore, underwater seismometers.

“There are just a couple of those now and they can’t really contribute fast enough to be part of a warning system,” Tobin said. “We would like to grow that tremendously in the future but that’s going to require new funding from the federal government.”

New Year 2022 resolution is to be fitter? 5 apps that will help you start the fitness journey