The Ultimate Ears line by Logitech is known far and wide by professional audiophiles and average consumers alike.They have a number of products ranging in price from $20, all the way to over $1000 – so there’s something for just about anyone.This is going to be the first of three reviews on the ear buds they sent me – to be followed by a “Good, Better, Best” comparison.Today’s review is on the 350 model which are “Noise-Isolating Earphones” – so just how well did they work? Compare the 350 with the Ultimate Ears 500vi to see if it’s worth an upgrade. You can also check out our list of the best earbuds for more options.

The box of the Ultimate Ears 350 ear buds say that they are “tuned for extra bass”, which I assumed would just be like someone pushing a “bass boost” button on a stereo.I also assumed that because these ear buds only cost $50, that they would sound cheap and flat.Well you know what they say about assuming…

I enjoy various musical tastes, so I gave the 350’s a good run to see what sounded the best on them, and while an old live Dead show from ’74 sounded really nice, it was when I was listening to some hip hop and techno that I was able to truly appreciate them.The bass came through quite crisp, however it didn’t distort or drown out the rest of the spectrum of sounds. 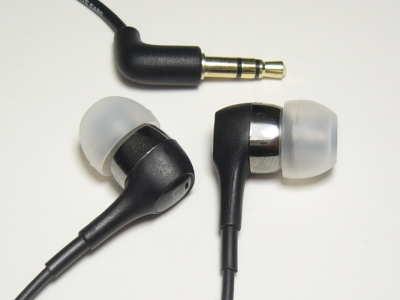 Related: Also check out our Ultimate Ears 500vi review if you want earbuds that come in different sizes.

The fact that the design is sweat resistant is quite nice as well, because generally when I’m working out or running I sweat profusely.I’ve had an extreme time with my A-Stars (the ear buds I used to use) falling out of my ears after about thirty minutes of use, and then about every five minutes after that because I sweat.With the 350’s, I can honestly say that I haven’t had a single issue with them leaving my ear when I didn’t want them to.

As I said at first, the 350’s are branded as noise isolating ear buds which they do quite well, however there’s a small problem with this.Now I don’t know about you, but when I’m listening to something on ear buds I generally keep the audio source (iPhone, mp3, player, etc) in my pocket.When I want to hear what someone is saying, it’s a real pain to have to dig it out and manually mute the volume – for some reason there’s no in-line mute or volume control on these things.I know they’re not an expensive model, but I would have really appreciated that feature.

Related: If you prefer something that’s custom made for you, you will like our Ultimate Ears 3D Ue11 In Ear Monitor Headphone Hands On and review.

Another thing I would have asked for in this model, would be the black memory foam tips that are provided with the other two models they sent me.It’s just an aesthetic choice, but I don’t like the look of the clear tips – they feel too medical to me – besides that, black would have looked better on the rest of the design.Something else I noticed while reviewing these (and maybe it’s just from getting a good seal on my ears, maybe it’s because the 6.8mm drivers are so highly tuned), is that for the first time I’ve had to turn down my iPhone while listening to music.Normally I listen at 100% volume, but anything over 50% was way louder than I’m used to.

Overall, I think the 350’s are a bass-head’s wet dream.They’re cheap in cost, and extremely effective.Maybe not so great for classical rock listeners or if you’re listening to pod-casts all day long, but if you want to feel like there’s a sub-woofer strapped to your head then these are for you.I give the Ultimate Ears 350 by Logitech 4 out of 5 stars.

Fitness tracker vs. smartwatch: What is best for you?