At this point, the majority of newly released Wi-Fi devices support 802.11ax, or Wi-Fi 6, the wireless standard's newest and fastest generation. You'll need a compatible router in order to put those faster speeds to work at home, but fortunately, you've got lots of Wi-Fi 6 router options from a fairly wide range of manufacturers.

That's a decent bargain for anyone looking to make the upgrade to Wi-Fi 6 in a large home, where a mesh setup with two extenders instead of one would be ideal. Unfortunately, the system did a poor job of routing my connection during my at-home tests, and frequently sent my signal through an extender when it shouldn't have, which slowed things down. There also isn't any alternative to the app when it comes to setup or system management, which isn't ideal if you're concerned about data collection. This is still a stable, workable mesh system at an attractive price, but I think most households will want to shop around before buying in.

With a basic-looking, all-white plastic design featuring a single indicator light and a subtle Motorola logo etched up top, the MH7603 is far from the most interesting-looking mesh system on the market. Still, it's inobtrusive enough to blend in with most home decor, and the build doesn't feel overly cheap.

About as big as a cereal bowl, each device in the system is identical and interchangeable, so you can use any of them as the main router for your network and the other two as satellite extenders placed elsewhere around the home. Turn them around, and you'll find two Ethernet jacks on each device, along with a USB-C jack that you'll use to plug the things into power. Like a lot of entry-level mesh systems, you won't find any standard USB ports at all.

To set the system up, you'll need to download Motorola's Motosync app on your Android or iOS device. It's a well-designed app that does a very good job of walking you through the setup process, which requires you to scan a QR code on the bottom of one of the devices to set up the router before adding the extenders to the network. Though I admittedly only tested the system with a single extender in my home, setup was wrapped up within 10 minutes.

Once the network is up and running, the app offers the usual mix of features for managing your network. You can see which devices are currently connected, run a quick speed test, activate parental controls or the guest network or monitor potential threats to your connection.

Specifically, the app will alert you if an unidentified device joins your network, though it seems a bit sensitive. After I finished setup, the app erroneously listed every device on the network as an unidentified potential threat, complete with an ominous skull and crossbones icon. Additionally, the app wasn't able to offer much information about those devices at all, with no autodetection of manufacturer or device type metadata. It's a pretty minor quibble, but I could see it all adding up to unnecessary confusion and concern for networking novices.

One other note about that app: It isn't made by Motorola. Instead, the app (and all of the software powering Motorola's home networking hardware) is a product of a New Hampshire-based company called Minim that specializes in "intelligent connectivity products that dependably connect people to the information they need and the people they love."

learned how to do an x-up manual 180 on a scooter. thats tight. 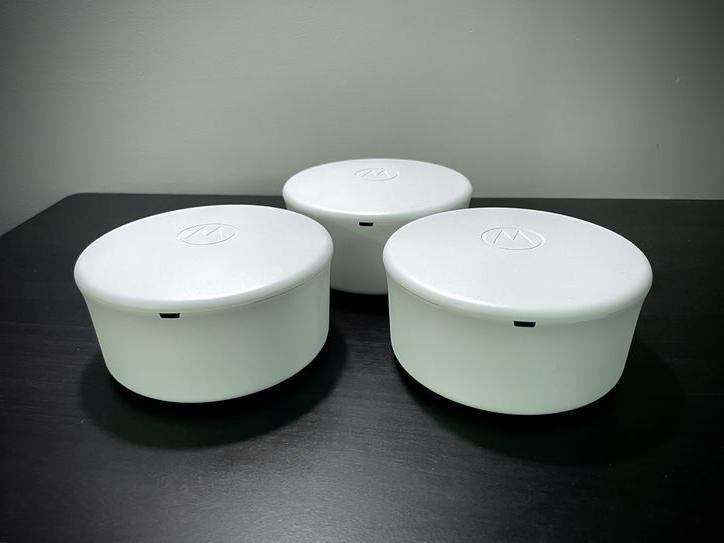 It always gives me pause when a router manufacturer turns to a third-party company for its home networking software instead of designing its own because it means you now have two companies' worth of privacy policies and service agreements to read through in order to get a sense of what's going on with your data. That's unrealistic for most consumers.

The good news is that the Minim privacy policy is relatively straightforward and more or less in line with what I've seen from other companies. That said, being in line with the rest of the industry means that Minim is definitely collecting data, including personal data like your name, email address, phone number and device identifiers. A lot of that goes toward network optimization and threat detection, but some of it is used for direct marketing purposes, like emailing customers about a third-party product if their data suggests it would be relevant to them.

According to a separate section of the policy for residents of California, where disclosure laws are more strict, Minim gets more specific and acknowledges that it collects but does not sell various categories of personal data, including information about past purchases and usage habits, "inferential information" about your behavior and preferences and online information like your browsing history, your search history and your service interaction history. Minim acknowledges that it collects employment history and financial information, as well, though the company says that neither one is used for marketing purposes.

As for the third parties Minim shares data with, the list includes unnamed vendors and contractors as well as internet service providers that lease Motorola networking hardware to their customers. That data is encrypted both in rest and in transit, and retained for 30 days, the company says.

"Our Privacy Policy does allow for data captured from consumer activity on the Minim and Motosync apps and on Motorola hardware to be kept for a maximum of 30 days," a Minim spokesperson said. "This is because we wanted to enable ISP customers, depending on their support department tracking and reporting requirements, to have access to subscriber data for that period. Notably, specific website/service (DNS) activity and user profiles are not visible to the ISP."

In fairness, you'll find similar data disclosures in the privacy policies of other manufacturers, including TP-Link, Netgear and Asus, but Minim seems to be casting a wider net than most. For instance, most manufacturers use your IP address to track your rough location for marketing and analytics purposes, but Minim uses your device's mobile GPS coordinates to pull that info, as well.

"When a customer uses our mobile application, Minim and MTRLC LLC may collect and store information about the customer's location by converting his or her IP address into a rough geo-location or by accessing the customer mobile device's GPS coordinates," the policy reads. "Minim and MTRLC LLC may use location information to improve and personalize our services for customers. If customer does not want us to collect location information, he or she may disable that feature on the mobile device."

The other problem with all of this is that Motorola doesn't offer an alternative to the app, with no instructions for web-based router setup or management in the in-box quickstart guide. A quick glance at the terms of service tells you why:

In terms of speed, the MH7603 was a middling performer among mesh routers. In my home, a 1,300-square-foot, shotgun-style house in Louisville with a 300Mbps fiber internet connection, the MH7603 returned an overall average download speed of 219Mbps, averaged across five spots throughout the house (you can read more about how I test Wi-Fi routers by clicking here).

An average of 219Mbps is lower than you might expect, but right in line with other dual-band, AX1800 mesh routers I've tested, including the Netgear Nighthawk mesh router (218Mbps) and the Asus ZenWiFi AX Mini (207Mbps). Like those other basic Wi-Fi 6 systems, the MH7603 saw its average fall because of poor routing -- specifically, it had a habit of routing my connection through an extender when connecting directly with the main router would have been faster.

To account for that in my data, I run two separate sets of speed tests with every mesh router I review. For the first, I connect to the network while I'm in the living room, the same room as the main router, and then I work back toward the opposite end of the house. For the second set of tests, I reverse it and start my connection in my home's back bathroom at the back of my house, near the extender.

In both cases, the system should be smart enough to figure out when the extender is and is not necessary, but the MH7603 struggled at that task, which showed up in the numbers. In the first set of front-to-back tests, my average, close-range download speed in the living room was a lofty 370Mbps, which is about as fast as things get with my connection. But when I'd start my connection near the extender and then move into the living room, that average speed fell all the way to 244Mbps. That's because at several points the system was still routing my connection through the extender.

Bring your home up to speed with the latest on automation, security, utilities, networking and more.

Faulty routing like that compromises performance because it means that your connection is often making an extra and unnecessary jump on its way to the cloud. Compare Motorola's overall average of 219Mbps in my home with the overall average for Google's Nest Wifi, a mesh router with no support for Wi-Fi 6 at all. That system is slower and less advanced than what Motorola's offering, but it does a much better job of routing your connection, and finished with an overall average of 222Mbps -- higher than the MH7603. Motorola's poor routing is essentially wiping away the Wi-Fi 6 speed gains.

For better performance from a Wi-Fi 6 mesh router, your best bet is to go with a tri-band model, with an additional 5GHz band that serves as a dedicated backhaul connection between the router and its satellites. The fastest we've tested is the AX6000 version of the Netgear Orbi, but it's too expensive for most at $700 for a two-pack. Fortunately, the TP-Link Deco W7200 is right behind it, performance-wise, and only costs $230 for a two-pack if you can catch it in stock at Walmart. For now, that system still sits in the top spot on my list of the best mesh routers we've tested.

The Motorola MH7603 mesh router is easy to use and capable of delivering fast speeds, but it's also prone to slowing things down with poor routing, and that makes it a fairly mediocre pick among entry-level Wi-Fi 6 systems.

Superior options include the aforementioned TP-Link Deco W7200, which only comes with one extender but makes up for it with outstanding tri-band performance, as well as the pricier Asus ZenWifi XD6, which is the top-performing dual-band mesh system I've tested to date. I'd even prefer a solid Wi-Fi 5 system like the Google Nest Wifi over the MH7603 thanks to the noticeably better routing. Bottom line: If you're going to upgrade to Wi-Fi 6, then I think you want more of an upgrade than this.