Kriti Sanon is one of the most stylish actresses in the Hindi film industry. The actress is strict about her fitness routine and keeps sharing her sizzling pictures in a well-toned physique on her Instagram handle. If you are looking for some workout motivation, the latest video showing the 'Mimi' actress in a pilates session will give you major fitness goals.

The video is shared by celebrity fitness trainer Yasmin Karachiwala on her Instagram profile. Along with the video, she told how the actress got in shape for her recent release 'Bachchhan Paandey'as Yasmin wrote, "Dedicating this reel to our love for pilates and @kritisanon Watch how @kritisanon uses patience, stability, and balance to get in form for #BachchhanPaandey". 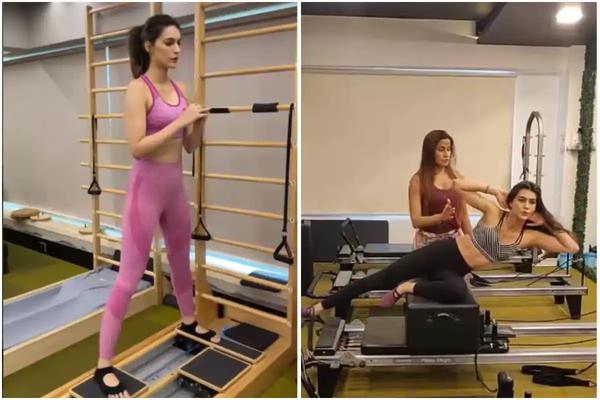 The fitness trainer opted for the movie's romantic track 'Meri Jaan Meri Jaan' sung and composed by B-Praak with lyrics by Jaani as the background music for the reel. In the action-comedy film, Kriti plays the role of journalist Myra Devekar and shares screen space with Akshay Kumar after their successful pairing in action-comedy 'Housefull 4' in 2019. The video has since then gone viral on the internet with many fitness enthusiasts feeling inspired by Kriti's dedication.

READ | Kriti Sanon recalls feeling depressed, sulking over wine with Sushant Singh RajputMeanwhile, on the work front, Kriti has exciting films lined up in her kitty. She will be seen romancing Kartik Aaryan in 'Shehzada', the Hindi remake of Telugu superhit Ala Vaikunthapurramuloo, which releases on November 4, 2022. Kriti is the leading lady in horror-comedy 'Bhediya' opposite Varun Dhawan, which will release in the same month on November 25.

On December 23, the actress will be seen in the action-thriller 'Ganapath' opposite Tiger Shroff. Set to release on January 12, 2023, Kriti will portray the character based on Ramayan's Sita in 'Adipurush' which has Prabhas and Saif Ali Khan portraying characters based on Lord Rama and Ravana respectively.

Tags:  how to set up a fitness tracker

I use a fitness watch to track my calorie burn. Can I eat back the calories I burn if I'm trying to lose weight?