Location
Home → Article → How to Charge your Fitness Trackers

The popularity of fitness trackers is taking off, with the devices' claims that they will help us become leaner and fitter, as well as more aware of ourselves and our fitness habits.

Along with our fitness tracker reviews, Live Science is bringing you some know-how.

Here's a look at how to charge some of the popular fitness trackers.

How to charge a Jawbone UP band

You can check your UP band's charge anytime by pressing the button and looking for the red "sun" status light. When UP band's battery is lower than 10 percent, the band will vibrate three times quickly, and the red sun will glow.

1.Plug the charging cable into a USB port on your computer.

2.Remove the silver cap with the Jawbone logo from your band, and plug the band into the other end of the charging cable.

3.The Sun status light starts to pulse when the UP band is charging, and glows solidly once the band is fully charged.

4.It takes 80 minutes for the band to fully charge. The battery should last about 10 days before needing a charge.

How to charge a Nike+ FuelBand

When your FuelBand's battery is running low, a battery icon will be displayed when you press the button.

When your battery has zero charge left, a plug-in icon will display, indicating you must plug the FuelBand into your computer to charge.

1. You can connect your FuelBand either directly, or via the provided USB cable, to the USB port on your computer.

2. A battery icon on the FuelBand display will start filling to indicate the level of your battery's charge

3. It takes about three to four hours for the battery to fully charge.

How to Change the Batteries in a Misfit Shine

You need to switch out the battery when the Shine stops working, about once every four months. 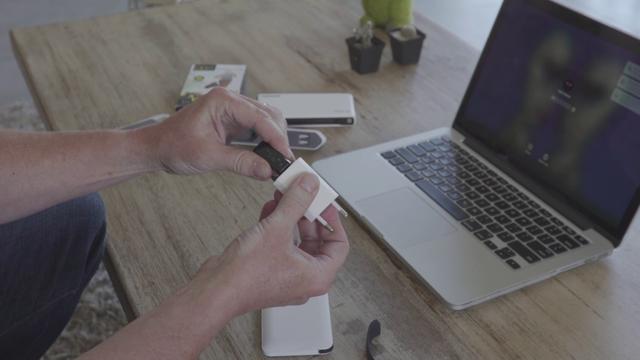 A special tool for battery replacement is provided in the Shine packaging. However, you can also use a flat-head screwdriver or eyeglass repair screwdriver.

1. Place the provided tool or screwdriver in the notch on the back of Shine, and lift off the cover.

2. To remove the old battery, use the magnetic clasp included in the Shine packaging. Place the large side of the clasp on the battery and pull.

3. Place the new battery positive side down into the back cover.

4. Line up the notch on the back cover with "12" mark on the inside of the Shine and close the cover.

How to charge a Fitbit Force

(Editor's note: Fitbit recalled the Force earlier this year, but for users who still have their Force, Live Science will continue to cover the device.)

You can check the level of your battery by logging into Fitbit.com and clicking the gear icon at the top-right corner of the page.

1.Plug the charging cable into a USB port on your computer, or into USB wall charger cube.

2.Plug the other end of the charging cable into the port on the back of the Force.

3.A battery icon on the display will show the charging progress. It takes about an hour and a half for the battery to fully charge. Your Force should last about seven to 10 days before needing a charge.

Related: Fitbit won't hold a charge: Here's what to do

How to charge a Fitbit Flex

You can check the level of your battery by logging into Fitbit.com and clicking the gear icon at the top-right corner of the page.

1.Plug the charging cable into the USB port on your computer.

2.Remove the Flex tracker from the wristband.

4.You should see one flashing light. As charging progresses, more lights will show.

5.It may take up to three hours to fully charge your Flex. The battery should last about five days before needing a charge.

Tags:  how to change time on lintelek fitness tracker