Truly wireless earbuds or TWS earbuds, as they are called these days, are fast gaining in popularity due to their perceived versatility. As it often happens in the personal technology space, Apple captured people’s imagination with the AirPods, and as always, they were too expensive for mass adoption. That presented an opportunity for multiple brands to create similar products for a fraction of a cost. Realme did so with the launch of their Buds Air last year, and now are looking to push the envelope further with their Buds Air Neo. Let’s see what the most affordable Realme TWS buds have to offer and if they are worth buying.

It is hard to miss the resemblance between the Realme Buds Air Neo and the Apple AirPods, even more so with the white variant that we got for review. The similarity doesn’t end there, and extends to the charging case too. The earbuds are made of good quality plastic with a smooth, glossy finish, and surprisingly without the company name or logo. Though they aren’t as compact as the AirPods, they aren’t too bulky either, and do not awkwardly stick out of the ears.

They are very light and each earbud weighs just 4.1 gm. Given the fact that they are fitted with a fairly large 13 mm dynamic driver, that’s quite an achievement in terms of size and weight, both. The charging case is compact too and weighs a shade over 30 gm. It can be charged using any micro USB charger. I would have preferred to see a Type-C charging port here instead. The earbuds do not have any physical buttons, but a small area at the back is touch-enabled and lets you perform a handful of tasks such as answering calls, play/pause tracks, jumping to the next track etc.

A few more functions can be assigned through the Realme Link app, along with enabling Google Assistant. These earbuds are IPX4-rated sweat and water resistant, so you can take them to the gym or for a jog without worrying about damaging them. They’re also Bluetooth 5.0 compliant and support the AAC codec. A low latency mode is present for better sync between audio and video while gaming or watching movies.

Just like their role model, you do not get any silicone tips for the ear on the Realme Buds Air Neo. The company goes with a one-size-fits-all philosophy with the hard plastic shell going into the ear. Unfortunately, it doesn’t fit perfectly in every ear, and I felt discomfort after using them for only a few minutes. I had to adjust them every now and then to feel comfortable. Maybe I am too used to silicone tips on in-ear monitors. Since there are none provided, there is very little passive noise isolation here. A lot of ambient noise seeps through, especially outdoors. 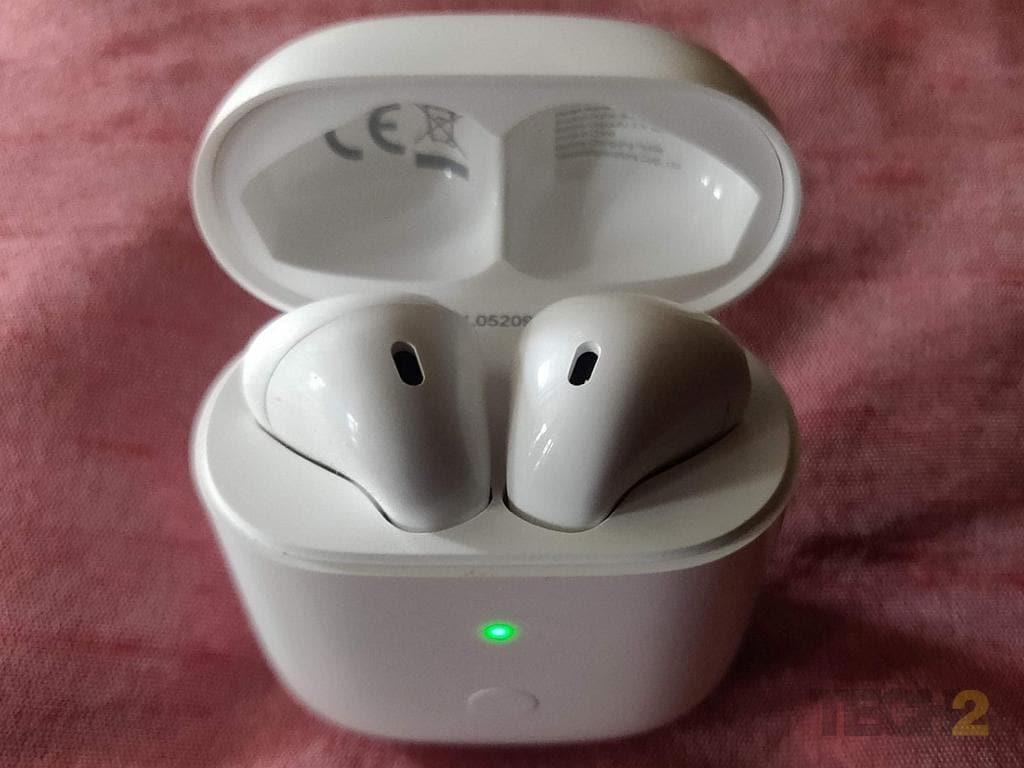 There’s another minor issue; since the earbuds are touch enabled, you end up either pausing the music or jumping to the next track when fiddling around with the fitting, and that can get quite irritating. But after you are done adjusting them, they do fit snugly in the ears and don’t accidentally pop out even during jogs. But the overall pressure on the ear is a bit more than I would have liked.

The Realme Buds Air Neo are very easy to sync and they support Google Fast Pair too. All you need to do is keep the button on the case pressed for a couple of seconds to get the buds in pairing mode and sync them with the phone. The connection stays strong courtesy of the Realme R1 chip that powers them, and there are no sync issues between the two buds either. The spec sheet mentions a wireless range of 10 metres and the Air Neo managed to hold on to the connection comfortably for a little over that distance, even with an obstruction in between.

Touch controls for audio are limited. You can play or pause a track or skip to the next one. You cannot go back to the previous track, nor can you control the volume from the buds. You can only do this from your phone. Speaking of sound volume, the Realme Buds Air Neo aren’t the loudest buds I have come across. To put it in terms of numbers, I had to push the Bluetooth volume on the phone to 75 - 80 percent to achieve the loudness that I generally get around the 50 to 60 percent mark from several other earphones. Though not the loudest, I found this Realme pair sufficiently loud even outdoors.

Moving on to the sound quality, it is average at best, but par for the course for budget TWS earphones. It is nowhere close to that of wired earphones or even the wireless neckbands that sell for thousand Rupees lower. These earpods are pretty high on bass thanks to the large 13 mm drivers. There’s ample bass to please the bassheads, but a bit too much for overall balance. It eats into lower midrange frequencies, and as a result makes the mids sound weak. The highs are reproduced reasonably well but the overall sound lacks detail.

Audio tracks without too many complex instruments sound pretty decent on this pair, but listening to those with a medley of instruments can be an ordeal. Simply put, if you primarily listen to Bollywood classics, dance numbers or EDM, the sound is fine on the Realme Buds Air Neo. If you are more into Rock or Metal, this is not the pair for you. But this is not a complaint specific to these earbuds. The budget TWS category is still evolving and a fair distance away from being settled. As compared to a year ago, the quality of sound that you get on TWS buds in this budget is significantly better, but still far from their wireless neckband counterparts. Complete freedom from wires on a low budget comes at the cost of sound quality.

The call quality is a bit of a concern, especially the microphone. I could hear the person on the line with reasonable clarity, but I wasn’t perfectly audible to the person on call. And that was the case irrespective of whether I was indoors or outdoors. It was a tad worse outdoors with the microphone picking up some ambient noise and making it really tough for the other person to grasp certain parts of the conversation. If you are looking for TWS buds especially for calling, the Realme Buds Air Neo is not an ideal choice.

The Realme Buds Air Neo lasted a shade under 3 hours on a full charge during my testing before one of the buds would run out of juice. That’s close to what the company advertises and standard for this category. The charging case manages to recharge these earbuds another four times before you need to charge the case again. That’s a total battery backup of a little under 15 hours, which is quite decent. While the battery status of the earbuds is visible on the phone they are paired with, similar data for the case isn’t available. The only indication you get when it is low on charge is that its LED glows red.

The Realme Buds Air Neo can be purchased for Rs 2,999 with a one-year warranty. That makes them one of the more affordable true wireless earphones around, but they do not raise the performance bar in the segment. While they don’t sound spectacular, they do look cool enough to pass off as something a lot more expensive. If you are looking to go fully wireless on a tight budget and flaunt it, this pair is a decent option under 3K.

However, if sound clarity and comfort are way more important to you than complete absence of wires, you get some high quality wireless neckbands under Rs 2,000 like OnePlus Bullets Wireless Z or even Realme’s own Buds Wireless that will serve you a lot better than any TWS pair in this budget.

Nano masks in works as tech comes of age The Standard