The Lincoln Navigator is a vehicle that evokes opinions.

Folks seem to either love the sheer enormity and luxuriousness of the Navigator — or despise its enormity and unnecessariness.

For 2022, there’s an updated Navigator that won’t win over any haters, but it might draw some looks away from the competition thanks to a few must-have features, a gorgeous interior — and something called the “Lincoln sanctuary.”

The copywriters at Lincoln broke out the thesaurus when writing the press release for the new Navigator. Elegant, effortless, serene, commanding, and unmistakable were just a few of the adjectives used to describe the luxury beast.

First introduced in 1998, the Navigator has helped keep Lincoln in the conversation over the decades when so many other brands have fallen by the wayside. Still, Navigator sales of 15,631 units in 2021 fell well short of the 40,505 Escalades sold by archrival Cadillac.

I reviewed the Escalade last year and found it stuffed with a mind-boggling amount of tech, including an augmented reality mode with floating navigation arrows superimposed over a camera view out the front of the car on the dash cluster that was a neat preview of what we’ll see on windshields just in time for cars to drive themselves so we don’t need navigation anymore.

Speaking of cars driving themselves, the 2022 Navigator features ActiveGlide, the Lincolnized version of Ford’s Blue Cruise. It works identically here as to BlueCruise, allowing for hands-off driving on 130,000 miles of “Blue Zones” — generally limited access, multi-lane thoroughfares like interstate highways — so long as the driver is always paying attention.

The Navigator has infrared cameras on the top of the steering column tracking eye and head movement to make sure the driver is paying attention to the road and not distracted by their phone, iced caramel macchiato, spicy chicken sandwich from Chick-Fil-A, or whatever else one might be distracted by while driving a three-ton, seven-passenger luxury SUV at 80 mph.

So long as you keep your eyes on the road, ActiveGlide will handle the steering and speed controls while you relax and make sure nothing weird happens. If it seems like I’m describing a self-driving car, that’s only because “self-driving” has lost all meaning in automotive discourse.

Autonomous vehicle-expert Alex Roy defined a self-driving car as one that you can sleep in while it drives along. You can not sleep in the 2022 Lincoln Navigator while it drives you along, but it feels awfully close. 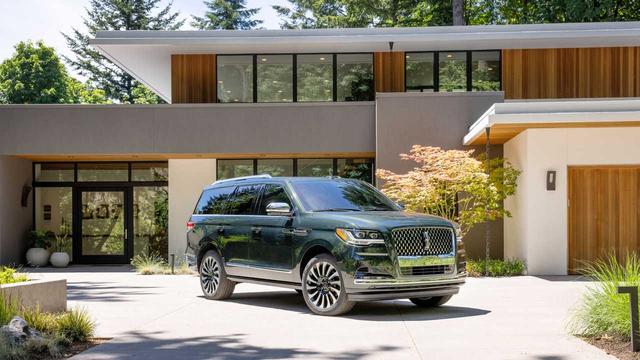 And it works! In an hour of rush hour commuting in the Phoenix suburbs, I was able to cruise down the highway without a care in the world (so long as I didn’t look away from the road for too long). The system did disconnect when I was approaching a sweeping turn and the sun was directly in front of us, presumably blinding the camera, but it wasn’t an emergency disconnect and both the car and I handled it without any fuss.

Look away for too long (or stop responding for medical or other reasons), and the Navigator will alert you in several ways. First, you’ll get a bright yellow visual warning on the screen telling you to watch the road. That’s followed by an audible alert and then a more urgent audible and a red visual alert.

If you still don’t respond, ActiveGlide will begin a series of rather alarming, jerky braking events. These aren’t enough to get you rear-ended, but they should bring your attention back to the road if you’re able to. Finally, if you keep ignoring the situation, the car will gradually come to a stop within your lane.

When I’ve posted about this feature on TikTok, people inevitably talk about how stopping the car on the highway is very dangerous, somehow forgetting that allowing a car to continue at 80 mph out of control down the highway is far worse. This is a critical safety feature that will save lives, and it also makes your highway commute or a long road trip significantly less fatiguing. You wouldn’t think steering was that difficult, but spending a rush hour behind the wheel while ActiveGliding feels like far less of a chore than usual.

While the updated Navigator includes a bigger center screen and available Walnut open-pore wood with a laser-etched map of Central Park (on the Central Park Black Label trim, at least), my favorite feature was the new 10.1-inch touchscreens on the back of the front seats.

They run the automotive version of Amazon Fire TV, which means backseat passengers can stream movies and TV shows, listen to music, and do whatever you might do with your Amazon Fire TV at home. The two tablets connect to the AT&T LTE-powered Wi-Fi hotspot in the car ($20/month for unlimited data), so as long as you have good connectivity, your backseat passengers will remain entertained and quiet for hours.

Each tablet has 9GB of usable storage plus an SD card slot, and Prime Video supports downloading for use in connectivity-dead zones. Amazon expects more apps will begin supporting video downloads soon. The two tablets can send video to the other if folks in the back want to watch the same thing, and audio can be sent to the main car stereo via Bluetooth if everyone wants to listen. Two Bluetooth headphones are included (and a headphone jack on each tablet) to free parents from listening to Encanto for the 674th time.

Putting Amazon Fire TV in the car — it’s also available in the 2022 Ford Expedition; Chrysler Pacifica; Jeep Grand Cherokee, Wagoneer, and Grand Wagoneer; and more to come — makes in-vehicle entertainment actually useful. Previously, road-tripping parents needed to bring along Blu-Ray or DVDs, or maybe they could bring along a Roku stick for a built-in HDMI port.

Combining in-car live streaming of YouTube, Netflix, Amazon Prime Video, or whatever with an unlimited-data AT&T hotspot is a family-hauler killer app. In five years, it’ll be hard to believe we lived without this. It makes even more sense for self-driving (the kind where you can sleep) or during electric-car charging sessions.

My test Navigator also featured massaging, heated, and cooled 30-way front seats, which sounds great, but it takes forever to get adjusted perfectly. If you owned the thing, though, you’d just set it and forget it. The 28-speaker Revel Ultima audio system sounded terrific, and Lincoln’s signature chimes — recorded specifically for the company by the Detroit Symphony Orchestra — make for a serene alternative to a blaring beep when you leave the fuel door open by accident.

Actually driving the Navigator was slightly less serene. Though the interior is stunning, and it has plenty of oomph thanks to 440 hp and 510 lb-ft of torque from a 3.5-liter turbocharged V6, it nevertheless delivers a firm, truck-like ride from its body-on-frame design.

Lincoln’s engineers have done their best with adaptive suspension and a trick feature that uses the camera to scan the road ahead for dips and bumps to preload the suspension for what’s to come. This is advanced tech, and I spoke with another journalist who found a railroad crossing far less jarring than expected, which we attributed to this Road Preview feature.

An improved, easier-to-set-up version of Pro-Trailer Backup Assist, which makes backing up a trailer as easy as turning a knob, is available, along with the latest versions of all Ford’s best driver-assist features including semi-automated parallel and perpendicular parking and unparking.

All in, the new 2022 Lincoln Navigator is a compelling entrant in the high-end SUV wars, but I don’t know if it’s enough to knock the Escalade from its lofty luxury perch. But, between the stunning interior, the clever streaming TVs, and ActiveGlide, perhaps it should be.

The Lincoln Navigator has a consistent user interface across its four main screens: the new 13.2-inch center screen, the 12-inch digital dash cluster, the 5.8-inch digital control module for second-row passengers, and the head-up display.

The screens all share animations, fonts, and information to present what Lincoln calls a “serene” and “harmonious” experience within the car. Lincoln calls it the Constellation visual design language, and it’s lovely — though not as lovely as this video game-perfect Arizona sky.

Stay on top of the automotive revolution and sign up for Jordan Golson’s free car reviews newsletter. This review is also published in the North State Journal.

Lincoln covered the travel and lodging to review the Lincoln Navigator on location, as is common practice in the auto industry. Automakers or their affiliates have no oversight when it comes to Inverse editorial content, which remains wholly independent and from the brain of our extremely opinionated car analyst and critic, Jordan Golson.