The Motorola Moto G100 is the company’s new top-of-the-line smartphone in the Moto G series. The phone was first unveiled in March this year for Europe and Latin America and has since made its way to the United States. The G100 is the first phone in the Moto G-series to get a Qualcomm Snapdragon 800-series SoC. The phone also packs a number of other exciting features. Here’s everything you need to know about it.

Motorola has gone with a flat screen that has a slight curvature on the edges and dual hole-punch cutouts on the top left. The bezels are also minimal in the G100, and the phone features Corning Gorilla Glass 3 with an anti-fingerprint coating for protection. On the back, there’s a reflective plastic panel that shows a variety of hues depending on the color option. 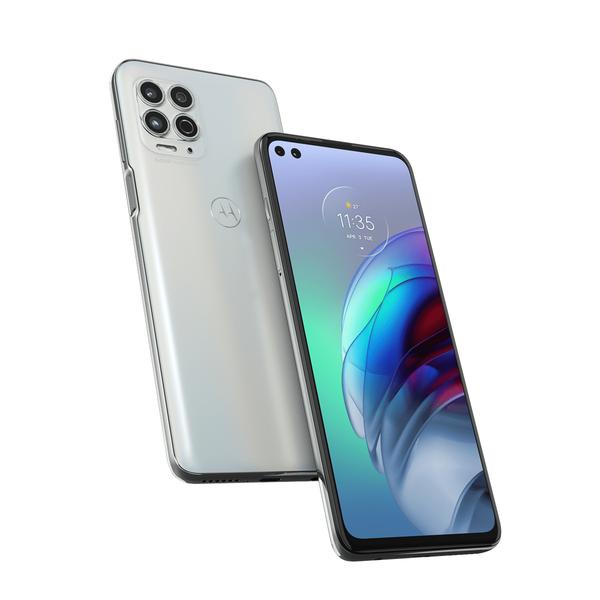 The Motorola Moto G100 also comes with 8GB of RAM, up to 256GB of onboard storage, and a microSD card slot. The phone supports SD cards up to 1TB. While the US only gets the 128GB model, the 256GB variant is sold in select Latin American markets.

While the front shooters can only capture 1080p videos at 30 fps, the main rear camera can take up to 6K videos at 30fps.

You’ll get a 5,000mAh battery on the Moto G100 that supports 20W fast charging. A compatible 20W fast charger is also bundled with the phone.

Coming to the connectivity options, the phone supports 5G, but it’ll only work on T-Mobile in the US. Even on T-Mobile, only the sub-6GHz NSA bands are supported. Motorola is supposed to add AT&T 4G LTE compatibility in the coming days.

Additionally, the Moto G100 packs Wi-Fi 6 (802.11ax), Bluetooth 6, NFC, and a USB Type-C port. The Type-C port also works as a DisplayPort, so you can connect the phone to an external monitor or TV, and get a desktop-like experience with Motorola’s ‘Ready For’ software.

Depending on the market, the phone comes with either a single SIM card slot or hybrid dual-SIM support. It also features a side-mounted fingerprint sensor that is embedded in the power button.

The Motorola Moto G100 phone runs on Android 11 out-of-the-box with the company’s My UX customizations. There’s no word on the software updates for the phone, but it’ll most likely receive at least one major Android update, and security updates for at least two years.

Apart from the My UX customizations, the G100 comes with ThinkShield for mobile that adds business-grade security and various enterprise-related features to the phone. The phone also supports Lenovo’s ThinkReality A3 smart glasses.

Motorola only offers one storage variant of the Moto G100 with 8GB of RAM and 128GB of built-in storage. It’s priced at $599.99 in the US, but for a limited period, the phone will be offered at a promotional price of $499.99. Apart from the US, as mentioned earlier, the phone is sold in select European and Latin American countries.

Here’s a look at the phone’s price in some of the other markets:

This is everything we know about the Motorola Moto G100 right now. We’ll update this page as and when any new information pops up about the phone.

[Updated] MyFitnessPal app not working, unable to login or create account? It's a known issue, permanent fix in works

First 10 things to do with a new Android Phone