Location
Home → BLOG → iPhone XR vs. iPhone 8 Plus specs: You can still get these older phones for cheap

Apple's's most recent iPhones, which include the iPhone SE,iPhone 11, 11 Pro and 11 Pro Max, are sure candidates if you're considering a new phone. They're fast and come with plenty of updated camera and video tricks. But just because these iPhones are newer, that doesn't mean previous models are obsolete.

The iPhone XR, for example, is one of the few options you have if you want a big-screen iPhone, but don't want to pay upward of $1,000 for the latest models. It starts at $599, £629 and AU$1,049 and its key features include 2018's A12 Bionic chip, vibrant color options and a camera that still takes excellent photos-- without an extravagant price tag.

In addition, 2017's iPhone 8 Plus is also good. Apple discontinued selling the phone in lieu of the new iPhone SE, but you can still nab it from other retailers such as Amazon as well as regional carriers. The 8 Plus sports a classic iPhone design, complete with the familiar physical home button.

To help decide which phone is right for you, I dive into the two phones' designs, cameras, hardware features and prices to see which fits your needs the best.

With its gesture navigation, animated emoji and face unlock, the iPhone XR ensures that you'll be more acclimated to the latest lines of iPhones than with the iPhone 8 Plus. It's also a great phone in and of itself. It has an excellent big screen in a comfortable body, fast performance and wireless charging, as well as a camera that's mostly as good as the iPhone XS.

Apple discontinued selling the iPhone 8 Plus, but third party retailers are still selling it. Is going with the 8 Plus worth saving that extra money with a less advanced processor and camera, and no dual-SIM capabilities? My short answer is no. Those who really want a physical home button can also find that in the newer iPhone SE. And while the 8 Plus' second 12-megapixel camera may be tempting, the iPhone XR is objectively the better phone in terms of specs.

Read our Apple iPhone 8 Plus review.

Of the two phones, the iPhone XR has a bigger 6.1-inch display. Despite this however, the XR's slimmer bezels mean that the physical footprint of the phone is actually smaller than the iPhone 8 Plus, and it's lighter as well. 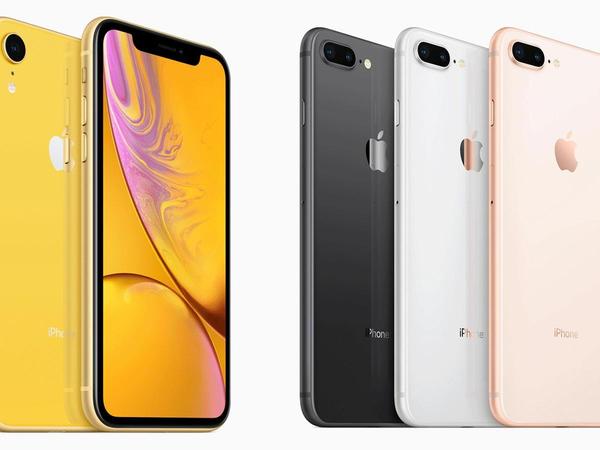 The iPhone XR also comes in six colors, including a vibrant red, blue, yellow and coral on top of the standard black and white. The iPhone 8 Plus, on the other hand, only comes in three color variants: white, black and gold.

But even if it lacks extra color options, the iPhone 8 Plus has a few design advantages. Its smaller 5.5-inch display is actually sharper than the iPhone XR: It has a higher resolution and more pixels per inch (for the exact specs, check out the spec chart below). And unlike the iPhone XR, there's no notch on the iPhone 8 Plus, and it retains a classic home button, which doubles as a fingerprint scanner.

Whether or not the iPhone 8 Plus' home button is considered an advantage is up to your personal preference, though. The button is familiar, and lets you easily tap to return home and double-tap to call up recent apps. The new iPhone SE also has this feature. Without the home key, the iPhone XR integrates swiping gestures for navigation instead. This may take some time to learn, but it's easy to adapt to after a while.

The iPhone XR has a front-facing camera that can sense depth and map your face. Because of this, you can unlock your phone or authorize saved passwords with Face ID instead of a fingerprint and you can make animated emojis that mirror your facial movements.

Unlike other iPhone X-series phones, the XR doesn't have a secondary telephoto rear lens as well. That means there's no 2x optical zoom (it uses a digital zoom instead) and Portrait photos are rendered through software; not enhanced with the telephoto lens.

Though I expected the 8 Plus to take better photos given its dual-camera setup, photos taken with the XR looked sharper and more vibrant. That doesn't mean the 8 Plus is a slouch, but I can noticeably see details in the XR that the 8 Plus managed to smudge out a bit.

And even though it renders its Portrait photos with a single lens, the effect looks just as good, if not better on the XR than it does on the 8 Plus. On the XR, the fallout between the fore- and background is smooth, skin tones are more realistic and the blur effect looks natural.

Zooming 2x on a scene with the XR also worked just as well as the 8 Plus' telephoto zoom. Objects clear and small details, like the lines of tree bark or individual leaves that fell on the ground, had finer lines and focus.

Also note that while both phones have studio lighting effects for the rear camera(s), the 8 Plus doesn't have it for its front-facing camera.

My day-to-day handling of both iPhones didn't show any discernible differences in speed, and when it came to daily tasks like launching apps and firing up the camera, both phones appeared to perform as swiftly as the other.

But the iPhone XR is indeed faster on paper, thanks to its more advanced A12 processor (the iPhone 8 Plus has 2017's A11 chipset). Check out the benchmarks below:

Other things to consider: Capacity, dual-SIM and 3D Touch

Capacity: Both the iPhone XR and 8 Plus still have 64GB models available. At launch, they had 256GB memory capacities and the iPhone XR had a third memory option of 128GB. However, now that the iPhone 11 devices are out, the 256GB option has been discontinued and currently, the iPhone XR and 8 Plus come in 64GB and 128GB. This is not bad per se; 128GB is commonly considered to be the "sweet spot" as far as storage goes. That's because 64GB may not be enough to hold all your photos and 4K videos, 256GB may be too extravagant.

3D Touch: The iPhone 8 Plus' screen is pressure-sensitive, and has a feature called 3D Touch. By tapping a tad harder with your finger, you can preview links, apps and messages before opening them. Aside from a few things that you can long-press (like the camera and flashlight shortcuts), the iPhone XR, as well as the iPhone 11 devices, do not have this feature for the most part.

Up close with the iPhone 8 Plus

Fitbit Charge 5 review: The fitness tracker that aimed for the sky