Sometimes the smartest phone is the one that costs less.

The iPhone SE packs the brain of Apple’s latest-and-greatest iPhone 13 into the smaller, classic body of an iPhone 7. It can connect to faster 5G cellular networks. And at $429, it is half the price of the flagship phones that fancypants people think they need.

After testing 2022’s iPhone SE for a few days, I’m happy to report: Apple’s least-expensive iPhone is mostly fine for people who don’t demand a lot from a smartphone. Or to put it another way, low expectations met.

But before you buy one, be clear about what’s not included. Here’s my guide:

This budget iPhone is zippy, familiar, comfortable in the hand and built to last. But its battery life and night photo capabilities are both mediocre.

And the headline new feature to this third-generation of the SE — the ability to connect to faster 5G networks — isn’t a reason most people should spend on an upgrade. Those networks are still spotty in the United States, and the SE’s 5G connection performed poorly in my San Francisco tests, delivering dreadful download speeds while draining the battery.

This is the iPhone for people who aren’t on their phone all day and don’t want to spend a ton of money on a new one.

The SE also has a feature some people might seek out: It’s the last iPhone with a physical home button and Touch ID fingerprint reader. In your hand, the phone is smaller, thinner and lighter than an iPhone 11, 12 or 13, which all unlock with Face ID.

If you bought the second-generation iPhone SE that debuted in 2020 or an iPhone 11 from 2019, there’s little reason to switch to this model unless your old phone is broken.

Busy people beware: While the new SE’s battery life should feel like an improvement from any older iPhone with a home button, the SE has the least long-lasting battery life of any new iPhone. On two different test days with a not-too-stressful load of calls, photos, emails and video streams, the SE died after 12 hours. Apple claims the SE can stream video for “up to” 10 hours, which is about the same as the iPhone 12 mini.

If you’re looking for the smallest-possible iPhone, the 12 mini and 13 mini are both shorter and lighter than the SE, while also offering more functional screen area.

The 5G connectivity included in this SE update doesn’t support the fastest type of 5G, known as mmWave, unlike Apple’s flagship phones. 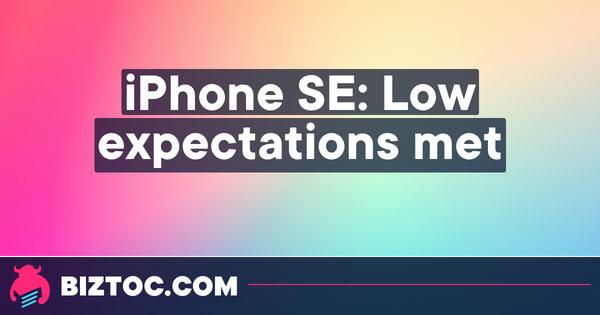 And there’s only one back camera lens — no ultrawide or telephoto zoom like on other models. More disappointing, the camera doesn’t support photography in dark situations with Night mode.

In daytime or well-lit situations, the iPhone SE does fine, comparable to an iPhone 11. I shot this comparison shortly before sunset:

But in darker situations, the SE’s camera disappoints. It doesn’t support the Night mode that Apple first introduced with the iPhone 11. I shot this comparison 10 minutes after the one above:

Because the iPhone SE uses Apple’s A15 Bionic chip and supports 5G, I estimate it will be able to get software updates and connect to cellular networks for at least six years. It’s not clear, however, if the battery will last that long without being replaced, which Apple will do for $49 out of warranty.

Accident prone? The iPhone SE is water resistant, but both the front and back are made of glass.

This may be a budget iPhone, but Apple will still try to extract more money out of you for its services. The entry-level model SE comes with just 64 GB of storage, and after you fill that up Apple will push subscriptions to its iCloud storage service. And it will show you ads pushing subscriptions to Apple Music, Arcade, TV+, Fitness+ and more.

Apple likes to advertise that it’s good at privacy, but my tests find it sometimes doesn’t go far enough. The iPhone software offers some useful privacy controls, but you’ll need to know how to turn them on. (Fortunately, we have a guide for that.)

If it’s a petite phone you seek, a new iPhone 12 mini is smaller, comes with 5G, two camera lenses and is available new for $599. Or you can get a refurbished 12 mini for as little as $400, which is actually less than the price of a new iPhone SE.

If you don’t care about 5G or would prefer a larger screen, the iPhone 11 is still a great model with a more-capable camera for $499.

And though switching is increasingly rare, you might find the grass to be greener over in Android land. Google’s Pixel 5a costs $449 and comes with a better battery and more camera lenses than the SE. And Samsung’s A-series Galaxy phones include 5G for as little as $205.

Help Deskis a destination built for readers looking to better understand and take control of the technology used in everyday life.

Data and Privacy:A guide to every privacy setting you should change now. We have gone through thesettings for the most popular (and problematic) services to give you recommendations. Google | Amazon | Facebook | Venmo | Apple | Android

Ask a question:Send the Help Desk your personal technology questions.