People always look at me weirdly when I say that I use Samsung’s Galaxy Buds Live with my iPhone 12 Pro. But it’s a pairing that makes sense for me: First, I need something that sits entirely within my ear, without a stem that’s going to risk being knocked about by a bike helmet’s strap. Second, they work with Samsung’s companion Galaxy Buds app on iOS, so I can still access their advanced features. And third? I just love that they’re shaped like little kidney beans.

But if you were to try the same thing with Samsung’s newer Galaxy Buds Pro or Galaxy Buds 2 you’ll find Samsung’s iOS earbud companion app hasn’t been updated to support them. Samsung wants you to buy a Samsung phone, so it appears to be locking you out of numerous little features, much like how Apple’s AirPods Pro are similarly restricted if you try to use them with an Android phone, or how OnePlus’ earbuds were missing key features when used with non-OnePlus Android devices at launch.

While I can happily use the iOS companion app to tweak and update last year’s Buds Live, the same app won’t be able to recognize Samsung’s latest buds. If you’re an iPhone user, it’s an annoying enough situation that it feels like Samsung isn’t interested in your money.

But how bad is the ecosystem lock-in with Apple and Samsung’s latest earbuds really? Here are the specific ways you’ll miss out.

Before we get into the details, here’s a chart showing which features you get with the AirPods Pro and Galaxy Buds 2, depending on whether you use the earbuds with iOS or Android:

The good news is that basic functionality, like being able to listen to music and access playback controls from the buds themselves, is available regardless of whether you use the earbuds on iOS or Android. So too can you control features like noise-cancellation and transparency (aka ambient) modes, which aim to block out and let in outside noise, respectively. 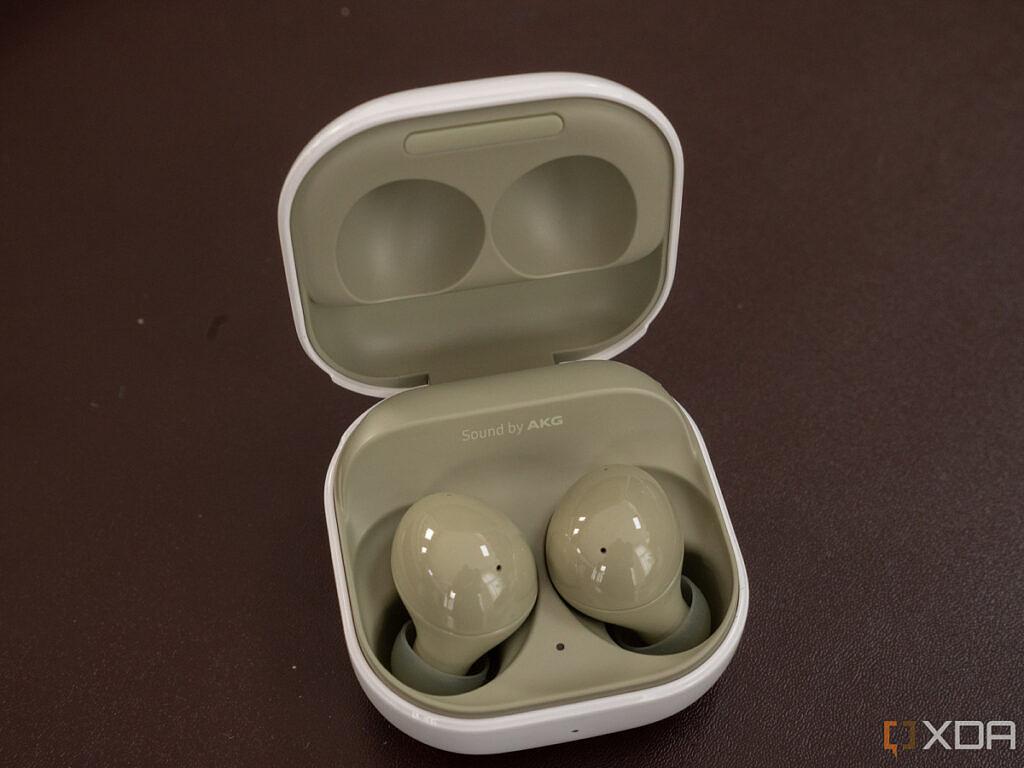 But lacking a companion app or native operating system support means you simply can’t access certain earbuds’ features if you’re not using the earbuds on their own platform. Most AirPods Pro controls are built directly into iOS, for example, while Samsung’s Galaxy Buds companion app doesn’t support its recent true wireless earbuds on iOS. That means you’re out of luck if you want to update either earbuds’ firmware on a competing operating system.

These are the kinds of features that you could grow to miss in the long term, especially if you ever need to troubleshoot any problems. If your earbuds encounter a bug, there’s no chance of getting updated firmware to fix it if you’re on Android. Or if you suspect that your AirPods Pro’s battery is draining too quickly while listening to music on an Android phone, you don’t have an official battery indicator to troubleshoot what’s going wrong (although iOS’s system-level battery indicators mean this isn’t a problem for iPhones).

In some cases there are third-party apps designed to fill in the blanks. For example, the Android apps Assistant Trigger and AndroPods promise to show your AirPods battery life and allow you to access your phone’s voice assistant such as Google Assistant with a squeeze or tap of the AirPods’ stem. But user reviews of both apps are mixed, and they’re clearly no replacement for official native support.

It’s also technically possible to use a tap-and-hold gesture to activate Siri when using Samsung’s Galaxy Buds with an iPhone. But in order to do so you have to customize the earbuds’ gesture controls, which default to activating noise-canceling and ambient modes. And customizing those controls relies on a companion app that doesn’t exist on iOS. It restricts easy access to a feature that, depending on your needs, you might rely on every day.

Next, both Apple and Samsung technically have features that let you find their respective earbuds using an app, but they’re very different. Apple’s is called “Find My” and currently it can show you where you might have left your AirPods on a map, based on the last time they were connected to your own phone. With iOS 15 this functionality is expanding by tapping into Apple’s Find My network, meaning other people’s Apple devices will also be able to report the location of your headphones. Either way, the feature is technically cross-platform since it’s accessible via a browser, even on Android. Samsung doesn’t have any of this map-based functionality, although like Apple its companion app includes a simpler option to have your earbuds play a sound to help you find them.

There are also differences in how the earbuds handle pairing. On iPhone, simply opening an AirPods case near your phone is enough to get the pairing process started. But even when you’re on a Samsung phone you have to head into its companion app before you start the official pairing process. Google has its own version of the AirPods’ pairing process called Fast Pair, but it’s yet to become ubiquitous almost four years later.

None of these missing features will fundamentally stop you from using either pair of earbuds to listen to music on the “wrong” platform. But it’s a hassle to have to hunt the Play Store for unofficial third-party apps to unlock basic functionality, or borrow a friend’s phone just to do a firmware update. Especially when you know you can avoid these problems with a different pair of earbuds.

And that might be what Apple and Samsung are banking on: if they can convince you to pair their earbuds with their smartphones in blissful harmony, then they know they’ve given you one more reason to stick around in their ecosystem. Yes, it’s easy to replace that outdated iPhone with an Android by itself, but then your AirPods, and maybe even your Apple Watch, and HomePod all won’t work as well. In the end, it makes it look easier and easier to stick around in iPhone land. Sure, Apple might sell a few thousand more AirPods if they worked better on Android, but at the risk of losing much-costlier iPhone sales. It might be why Samsung recently revealed its new flagship Google watch won’t work with the iPhone, either.

In portable audio land, it all means that, unless you have a very strong preference for Apple or Samsung’s earbuds, you’ll get a more complete experience with less hassle by pairing like with like. You can fight ecosystem lock-in all you want, but sometimes it’s just easier to go with the flow.