The deltoid muscle is the main muscle of the shoulder. It consists of three parts, also called heads: the anterior deltoid, lateral deltoid, and posterior deltoid. All three assist with arm elevation and play a large role in moving and stabilizing the shoulder joint and upper arm.

The entire deltoid muscle spans from the ridge of the scapula (shoulder blade) to the end of the clavicle (collarbone).

This article discusses the anatomy of the deltoid muscle. It covers what its functions are, health conditions that affect it, and rehabilitation after injury or surgery.

Each head of the deltoid has slightly different attachment points, also called insertion points. This allows for more control and a full range of motion at the shoulder joint.

The anterior head of the deltoid works closely with the pectoralis major (muscle in the chest). This allows for full stabilization near its higher attachment on the clavicle.

The anterior (front) deltoid rotates the shoulder joint by drawing the arm inward. Through flexion (lifting your arm up) and inward (medial) rotation, it allows the arms to be raised toward the front of the body. This is called forward flexion.

This action can be seen in a variety of functional tasks and is important for arm movement. The forward-flexed motion moves the arm toward the insertion point of the anterior deltoid at the clavicle.

The lateral (side) deltoid rotates the shoulder joint laterally (to the side) moving the arm outward or away from the body. This is also referred to as abduction. This motion is important while walking, reaching, and doing any tasks where you're moving your arms away from the center of the body.

The posterior (rear) deltoid rotates the joint laterally, which moves the arm backward and outward. This moves the entire arm toward the spine, which is where this part of the muscle attaches. This motion is seen often when dressing, reaching backward, or throwing.

The deltoid consists of three parts or heads: the anterior deltoid, the lateral deltoid, and the posterior deltoid. Each has a role in helping to move the arm, whether it's to the front, side, or back.

During pregnancy, the embryo develops the parts of the deltoid muscle from the mesodermic layer of cells. This is the middle layer in the earliest stage of development that becomes structures including bones and muscles.

Myoblasts are early muscle cells that evolve into muscle fibers. They often develop into upper extremities (arms and hands) and lower extremities (legs and feet) during early development. The deltoid muscle develops from dorsal muscle cells, which are toward the back of the body.

The anterior deltoid is composed of clavicular muscle fibers since its insertion point is on the clavicle. 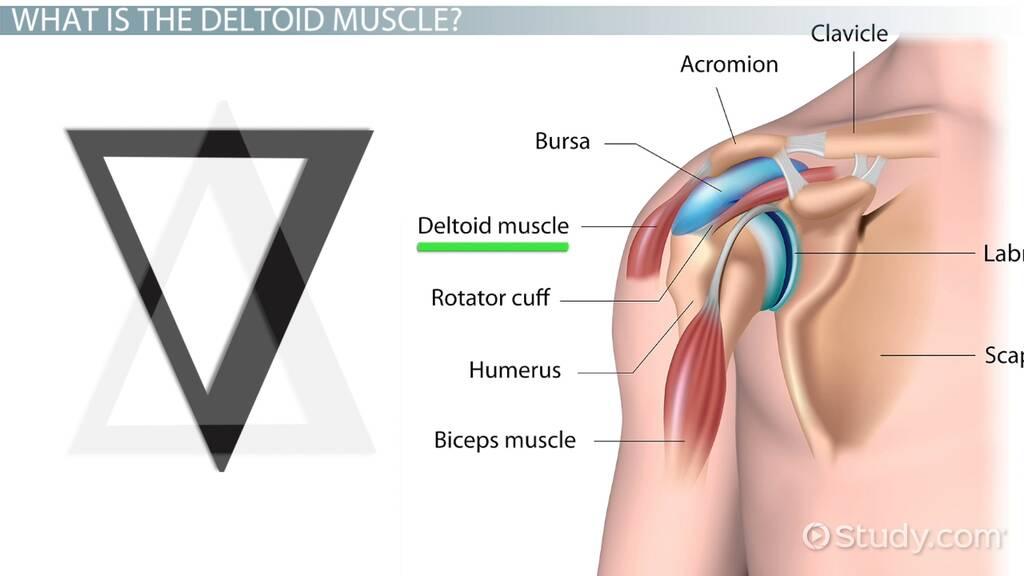 The lateral deltoid has acromial muscle fibers because it connects to the acromion process, part of the shoulder blade.

The posterior deltoid has spinal fibers due to its connection to spinal processes, or bony projections, of the vertebrae.

The deltoid muscle develops during early pregnancy from the mesodermic layer of cells. This layer grows to become muscles, bones, and other tissues.

The Anatomy of the Shoulder

Anatomical variations are differences that people may have in their body's structure.

In some cases, a difference in the attachment of the lateral deltoid into the medial epicondyle of the humerus (upper arm) is seen. This is different from its typical insertion point on the acromion process (in the shoulder blade) of the humerus.

This variation can complicate blood supply and nerve distribution. This makes it important for medical professionals to be mindful during internal procedures such as surgery.

An additional variation may be present involving blood supply. The thoracoacromial artery plays a large role in providing each of the deltoid heads with blood supply and oxygen. This artery typically runs through a groove between the deltoid and pectoralis muscles.

How to Test Your Grip Strength https://t.co/Tz9oJejCS9 #fit

However, a variation may be noted in some individuals where this artery tunnels through the deltoid rather than around it. If any of the deltoid muscles are injured, this can cause pain, spasms, altered sensation, or lack of blood supply.

Some people may have anatomical variations or differences in the structure of the deltoid muscle. This can include variations in where the muscle attaches. Also, the thoracoacromial artery may run through the deltoid rather than around it.

As mentioned earlier, the deltoid muscle plays a large role in moving the arm. Each head of the deltoid muscle also plays a role in stabilizing the shoulder joint. This helps improve the smoothness and overall quality of arm movement.

The shoulder, or glenohumeral joint, consists of the scapula (shoulder blade) and humerus (upper arm). It relies on the upper arm muscles for stabilization and overall joint integrity.

Motor function is the sole and primary job of the deltoid muscle.

The deltoid muscle allows motions that are important for using your arm in daily tasks.

Associated conditions are often related to injury of the deltoid or the muscles next to it with similar functions.

Muscles in the upper arm region include the supraspinatus, infraspinatus, teres minor, and subscapularis (together known as the rotator cuff). The most common injury to this group of muscles as a whole is a rotator cuff tear, which tears the tendons where your arm connects to your shoulder.

While the deltoid is not one of the rotator cuff muscles, it may be impacted as a result of poor motor function or surgery to this set of muscles. This may place undue mechanical stress on the deltoid muscle. It can cause a muscle sprain if it continues over a long period of time.

Abnormal muscle movement that causes this stress can be addressed through rehabilitation of the entire upper arm after injury or surgery.

The deltoid muscle may also be a consideration when surgeons consider procedures for other parts of the arm.

The anterior head of the deltoid is located at the front of the arm. Therefore, this muscle is an important consideration when surgeons need to operate in this area.

Some surgeries, such as rotator cuff repair surgeries, may use the deltopectoral approach. This uses fibers and anatomical landmarks from the deltoid and pectoralis major muscles to guide incisions.

Both frontal and side approaches to surgery include splitting the deltoid muscle fibers and then sewing them back together.

The axillary nerve, which is immediately below the deltoid muscle, controls the deltoid and other upper arm muscles. This nerve may also be impacted through surgery or traumatic injuries. This would require more extensive rehabilitation efforts, along with potentially more procedures to attempt nerve regeneration and repair.

This nerve loss can result in loss of movement in the deltoid, along with other muscles the axillary nerve supplies. You may also have a lack of sensation in the deltoid muscle, depending on the severity.

The cephalic vein runs adjacent to the deltoid muscle and assists with circulation and fluid management. An injury of any kind to the cephalic vein can result in fluid buildup to the upper arm.

If not addressed immediately, fluid buildup can lead to other complications. These include skin changes, loss of blood flow, nerve damage, and loss of muscle strength.

The deltoid may be impacted by injury or surgery of surrounding muscles and ligaments. For example, a rotator cuff tear can cause abnormal muscle movement that puts strain on the deltoid. Some arm surgeries involve splitting muscle fibers in the deltoid and may require rehabilitation of the muscle.

If someone has surgery on the deltoid or an injury requiring extensive rehabilitation, treatment will follow a specific protocol. This protocol will vary slightly based on the injury that occurred and whether surgery was performed.

Most protocols require an individual to wear a brace, which keeps the arm still for two to three weeks. This stability gives the muscle adequate time to heal from a repair without causing further or repeat injury.

While the arm is immobilized, an occupational or physical therapist will help with moving the joints below the upper arm. This includes the elbow, wrist, and fingers. If these joints don't move, it can cause muscle weakness, resulting in a longer rehabilitation period.

More advanced exercises and range-of-motion activities are completed starting about six weeks after surgery or injury. After that, your exercises may progress to functional tasks including dressing, writing, driving, and throwing. This progression depends on how you tolerate the previous steps and whether you have pain or complications.

This protocol may be different if an injury or surgery has resulted in nerve loss. In this case, pure strengthening is not the focus of the rehabilitative professional. Re-education of nerves in conjunction with muscles can increase the chance of regaining the neurological connection between your brain and the injured muscle.

With either injury or surgery, it's important to use caution and closely follow your occupational or physical therapist's instructions. They maintain close contact with your healthcare provider and will update each professional involved.

Early treatment will help give you the best chance of restoring motion and nerve function in your shoulder.

The deltoid muscle can be injured or impacted by surgery on other muscles in the shoulder. Rehabilitation can help to restore movement and lessen pain. You may need to wear a brace first to give the muscle time to heal. Rehabilitation may then include specific exercises to build up strength without reinjuring the shoulder.