After a few wilderness years as a niche, upstart technology, virtual reality is finally big business – making getting onboard with one of the best VR headsets an increasingly important step for the self-respecting tech enthusiast.

With the battle for the metaverse taking shape as companies like the once-named Facebook (now Meta) reorganize their whole businesses around controlling a new frontier where our lives in the real world intersect with the digital realm, understanding what virtual reality has to offer today is a bit like getting in on the ground floor with the introduction of the internet. Between VR and AR (augmented reality), we are increasingly going to be working, learning, playing and socializing in spaces presented to us through this fast-growing category of head-mounted displays.

-There are sharper screens out there

There are plenty of good reasons why the Meta Quest 2 (previously called the Oculus Quest 2 before a branding change at parent company Facebook – now Meta) is the most popular virtual reality headset on the planet.

It’s comfortable to wear for long stretches of time and is wire free. It is quick to set up thanks to a self-contained inside out camera tracking system, can be enjoyed by those with minimal tech experience. The Quest 2’s screen is sharp and its movement smooth, its game library is large and ever-growing, and its platform is ever-improving, from the addition of controller-free hand tracking to increasing experiments in the augmented reality realm.

More than anything though, it’s just fun. You can be a relative tech-luddite and still appreciate the thrill of a zombie outbreak in Arizona Sunshine, or be awe-inspired by a trip to the International Space Station in a VR tour. With apps to help you meditate, workout, play and learn, the Quest 2 really is a platform for virtualized experiences of all kinds. Plus, if you’ve got a high-end PC, you can tap into practically all of the virtual reality applications and games that a dedicated PC VR headset too can offer over an optional USB-C cabled connection.

It manages all this while still being relatively affordable too, offering more-than-good-enough specs at a price point that opens the door to the VR-curious. Whether you’ve never tried VR before, or are looking for a flexible companion to a high-end PC, the Quest 2 offers something for everyone.

The premium VR package to buy

The Valve Index hasn’t got the highest resolution screen on this list, but in almost every other aspect (price allowing), it’s the premium PC-connected VR headset experience to beat. 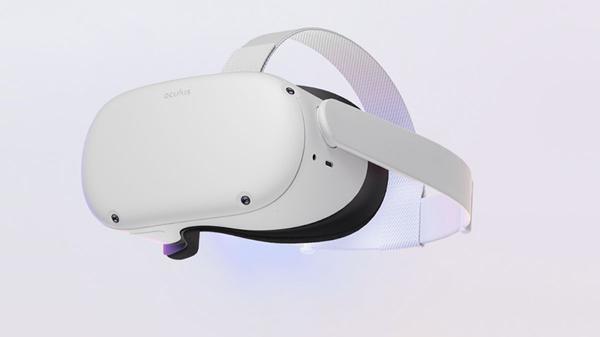 With a supersmooth 144Hz refresh rate and wide 130 degree field of view, the Valve Index offers truly immersive virtual reality. Though bulky, its headset is comfortable for long play sessions, its tracking capabilities are spot on (even if its set up process is a bit more involved than we’d like it to be) and its controllers are simply sublime. The so-called ‘Knuckles’ not only feature buttons and motion tracking, but are designed in such a way as to leave your fingers free, with finger-tracking elements allowing you to use your hands as you would naturally interact within a digital world. It’s marvellous.

It has a couple of issues we’d like to see ironed out for a successor. Firstly, we’d be happy to lose a little motion tracking accuracy in favour of an inside-out tracking system that would let us do away with the finicky external base stations. We’d also be keen to see Valve offer some form of wireless play, too, as the Index requires many cables to run.

But once you’ve got those Knuckles on and have your free, bundled-in copy of Half Life: Alyx (the very best VR game) running, all those grumbles fade away. If you can afford it, and have the PC to pair it with, the Valve Index is the most impressive VR hardware you can enjoy today.

If you’re after the last word in virtual reality screen quality – without resorting to spending literal thousands on niche research or commercial devices – the HTC Vive Pro 2 is the VR headset for you. Offering a gigantic 5K combined resolution for its screens, and throwing in a fast refresh rate and wide viewing angle to boot, if this list was based solely on headset quality, it’d be the winner. We’re talking about a screen so good sometimes to be close to just looking through a window to the real world outside – and all within a comfortable, if bulky, headset too, one that can accommodate glasses wearers and includes a physical IPD slider.

But it’s not the complete package. The HTC-branded controllers it works with are terribly aged at this point, being large, heavy, wand-like things (if you can find the Valve Knuckles sold separately anywhere they will be compatible as well, however), and it suffers from the same tethered limitations that the Valve Index shares with its cables and base stations. It can also get quite hot near the screen which, considering the resolution it's running at and the power required to get it ticking along smoothly, is somewhat inevitable.

Factor in a truly eye-watering price for the complete bundle package, and the overall components don’t quite match what Valve is offering. If, however, you can get the headset by itself at a more bargainous price, mixing and matching with Valve’s controllers would make this very close to the ultimate PC VR experience. Shop around…

+High resolution screen+Good value for the specs on offer

-Tracking could be better-Would benefit from higher refresh rate

Pop the HP Reverb G2 over your head and you’ll be immediately dazzled by its super-sharp display. While not a cheap headset, it’s relatively affordable, given just how clear its display is, even if its refresh rate isn’t quite as smooth as some of the competition.

That affordability however does ignore the fact that controllers for the HP Reverb G2 are sold separately, and that you’ll need a capable PC in order to power that screen to its highest capabilities.

It’s a mixed bag then. On one hand you’ve got a physical IPD slider to ensure the most comfortable position for the lenses in front of your eyes, but it’s also another restrictively tethered headset, connecting to a computer over cabling. It’s open nature to PC VR platforms means there’s a great array of applications open to it, but its tracking isn’t quite as reliable as some of the other options on the list.

The HP Reverb G2 then stands as a great option if you can’t quite afford the HTC Vive Pro 2, but it’s a little behind the pack in a few too many areas to top this list.

-Expensive for its capabilities-Ageing controllers

The next step down the list of HTC VR gear, the Cosmos Elite is a capable – if uninspiring – virtual reality headset.

It’s very similar to the original HTC Cosmos, but the Elite favors the more accurate base station tracking solution than the Quest-like inside-out camera tracking of the original Cosmos. It’s quite a heavy headset at about 2lbs in weight, but HTC does well to make it feel comfortable with plenty of ergonomic fit adjustment points and a flip-up front display for quickly getting a view again into the real world.

However, similar problems found with the HTC Vive Pro 2 rear their heads here, but without the benefit of the super screen of the Vive Pro 2 to soften the blow. It’s still quite an expensive headset, its controllers are showing their age, and the many-cabled set up is both finicky and restrictive. The Cosmos Elite can still wow, but it’s best only approached if you find it at a bargain price.

A unique, if limited, VR headset

-Smartphone controls-Expensive for what’s on offer

An attempt to take a bite out of the Meta / Oculus Quest pie, the Vive Flow is an intriguing, if flawed VR device.

It’s supremely portable, weighing just 6.7 ounces, but it manages that by making some considerable compromises – to get more than five minutes battery life out of the headset you’re going to need to hook it up to an external battery pack, for instance. There aren’t even controllers or hand tracking available to the device either – you’ll need to use a paired (Android-only) smartphone with the Vive Flow to browse its store and control its experiences.

Despite a high-resolution screen (at a low refresh rate, however), HTC isn’t billing this as an Oculus or Index killer though – rather, it’s hoping its portability will let owners take advantage of it on trips away to watch videos and take part in mindfulness and wellness activities, rather than high end gaming sessions.

That’d be a reasonable idea were it not for the price. What the Vive Flow offers in portability, it can’t justify its limited use cases against its comparatively high asking price. Thumbs up for its forward-thinking lightweight design, but look elsewhere for pretty much everything else.