Most users will choose between the aluminum, stainless steel, and titanium Apple Watch Series 7 models, but the pricey Hermes edition sits atop the lineup as the most luxurious. Here's how the hardware differs and what you get for your money.

Despite becoming available to order at the same time as the standard Apple Watch Series 7 models, Apple has just recently started shipping the high-end Hermes models.

The Hermes Apple Watch Series 7 comes exclusively in stainless steel. Users can opt for Silver or Space Black colorways. Like the remainder of the lineup, it's available in both 41mm and 45mm case sizes.

Here, we are looking at the 41mm silver Hermes Apple Watch Series 7 with the Gourmette Double Tour band

Hands on with the hardware

Standard models of Apple Watch come wrapped in white paper with two boxes on the inside for the band and watch, respectively. For the Hermes, it comes in a sturdy cardboard box in the signature Hermes orange color. The boxes slide out from the inside, one for the watch and the other for whichever Hermes band you chose to bundle it with.

Looking at the watch itself, there are nearly no physical differences from the standard stainless steel Apple Watch. You'll notice on the back it says "Hermes" etched into the steel, but it's otherwise identical. It has the same body, the same always-on display, and the same performance.

There is one small physical difference though, which is the Space Black color option. Apple used to offer Space Black to everyone. However, in the last two years Apple has moved away from the color and offered the normal stainless steel only in Silver and Graphite. Space Black has remained an Hermes exclusive ever since.

Graphite is more of a silver or gray color, while Space Black is darker. It's a bit of a bummer for the normal stainless steel owners as the graphite doesn't look too far off from the silver and Apple's own bands haven't been updated for the Graphite color.

Hermes etched into the back of the Apple Watch Series 7 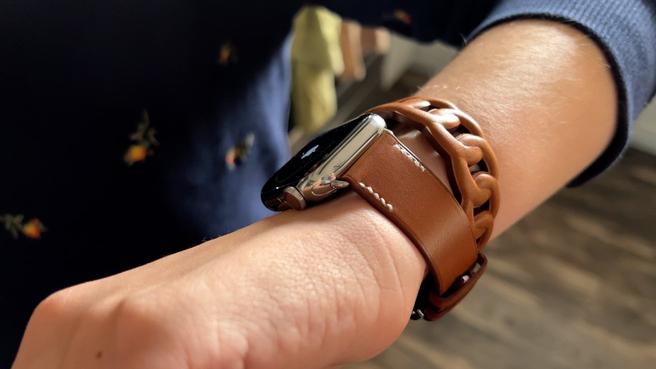 All of the Hermes bands are leather, and probably aren't a good choice for extracurricular activities. Working out, swimming, sports, yard work —with these kinds of activities, a more durable band choice will be a better fit.

That's why Apple bundles in a second bonus band for free. In each Hermes Apple Watch box, you get your leather band of choice, but you also get an Hermes orange sport band. This ensures you do have an alternate choice beyond the leather band for daily wear.

The band we chose to bundle with our Hermes Apple Watch was the Gourmette Double Tour band. Apple says this all-new band choice pays homage to the iconic Hermes dog collars that hail from the 1930s. It's made of ultra-soft Fauve Barenia leather.

It is made by stamping the leather into this shape so that it has an amazing look from the front. The back is all flat, which does make it very comfortable on your wrist. It's surely an elegant band option, and, as these bands can fetch hundreds of dollars on their own, a lot of the money you're spending on a Hermes Apple Watch goes toward the band.

Aside from the bands, the other special feature you get with the Hermes model are a trio of exclusive watch faces. You can only get these by purchasing the Hermes edition, just like the Nike version's exclusive faces.

The first face is the Hermes Circuit H face. This face has two style options, with the hour straight up and down or angled from the side. Then you choose your color option.

The second face is simply called the Hermes face. This face has a couple of style options, including being able to change the numbers around the outside to different fonts and setting the time to numbers or Roman numerals.

Then, there is the Hermes Circular face. It's similar to the Infograph face and has four rounded complications in the corners.

All of these faces have the Hermes logo emblazoned on them to make it clear what version of the Apple Watch you're sporting. Another little touch with the watch faces: as you scroll through all available faces, you'll notice that they all are pre-set with the signature Hermes orange color. You can go and change the colors, but they have the Hermes orange by default.

Is it worth it?

That brings us to the obvious question —is the Hermes Apple Watch Series 7 worth it? If you're questioning if you'll get enough value from the bonus sport band and the extra watch faces to justify the cost, the answer is a resounding no. Like any fashion item, you're not paying for extra features, you're paying for the logo and the clout that comes with it.

A Hermes Apple Watch is worth it if you want to be wearing Hermes on your wrist. You can buy a Hermes band even create your own watch face with the Hermes logo, but this is the only official way to get an Hermes-branded smartwatch. That, and it's the only way to get a Space Black stainless steel case.

If either of those things is important to you, the Hermes Apple Watch Series 7 has many little touches that certainly make a more luxe experience.

The Apple Watch Series 7 Hermes Edition starts at $1,229 and can be ordered from Hermes or Apple.

If you're looking for the best Apple Watch deals, check out our Apple Watch Series 7 Price Guide to compare discounts across popular retailers.