Freddie Steward has vivid memories of an away match in the Six Nations, something he has yet to taste as a player. It was a trip to Cardiff for a famous England win in February 2017.

Steward was 16, celebrating with his father as Elliot Daly scored a dramatic winning try in the last few minutes. “I wasn’t old enough to drink but I remember being drenched in beer from everyone else throwing their pints around,” says Steward, the England full-back now preparing to face Scotland in Edinburgh this Saturday, after five Test caps, all of them at Twickenham.

“I am nervous,” Steward says, “but it’s not something I’m scared of. I’ve grown up watching the Six Nations every year so running out at Murrayfield now would be a really cool experience.”

These tales of transition from young fan to participant are easily relatable, yet always tantalising as we onlookers can only imagine how it feels to switch from the stands to the pitch. “Dad managed to get tickets through a ballot,” Steward says ahead of Thursday’s naming of the England team for this season’s Six Nations opener.

“It was on his bucket list to go to the Millennium Stadium and experience that atmosphere. We were very fortunate to be in that corner where England scored. Watching that and now having the opportunity to step out on the field and do it is crazy. But it’s an incredible opportunity.” 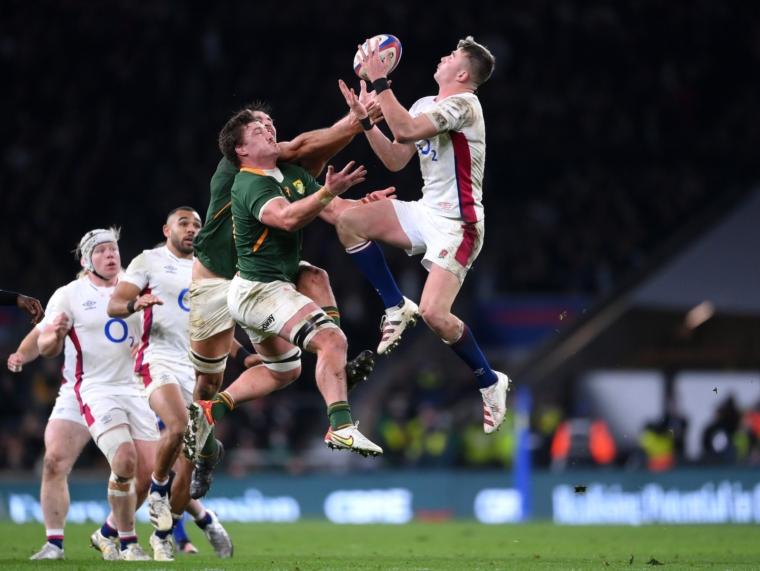 Murrayfield holds a unique place in English rugby folklore. Ben Youngs, a team-mate of Steward’s for Leicester and England, has played four Six Nations matches there: three wins and a draw. But Youngs missed England’s loss in 2018, which was when England’s Owen Farrell and Scotland’s Ryan Wilson had a scuffle in the tunnel. And then there are longer-ago events like the storm-swept Scottish win of 2000, or the Grand Slam ambush of 1990.

So Youngs has given Steward and England’s other novices the lowdown – on the “hostility of the environment,” including “stepping off the bus”, where there is normally a bagpipe band within ear-splitting earshot.

“I do remember Gloucester away this season, catching high balls in front of the Shed,” says Steward, when asked for hotpots he has seen in his 44 league and European appearances for Leicester. “[That is] not on the level I think we’ll experience on Saturday. It’s something that’s very hard to replicate – that hostility from the crowd. At full-back, the noise is a massive factor. When you’re far away from your team-mates, trying to organise a back three, and they can’t hear you, it’s difficult.”

It’s not as if it never rains or the wind never blows in Leicester, or in Norfolk where Steward, who turned 21 in December, was brought up. But England have been busy dunking rugby balls in buckets of water, and hoping the breezy conditions in training, and up-and-unders from the scrum-halves and “spiral bombs” put up by George Ford have done the rest to get them ready.

Steward, with his hair flecked with blond dye, brings a substantial frame of 6ft 5ins and almost 16 stones as England’s new last line of defence. He spent some time on the wing in the autumn, and some see him as a future inside centre.

Up to now, though, full-back has been his forte, and he has been tagged by some pundits as infallible under the high ball, which is clearly not in Steward’s control, but quite a reputation to take to a potentially windy and rainy Edinburgh.

For the record, Steward did drop two kicks in the closing 10 minutes of November’s knife-edged win over South Africa. And he acknowledges this with honesty and insight: “There have been a couple of times this season, and it’s happened quite often [overall], where I have dropped balls.

“We come into training the next day and we don’t talk about the skill reason why the ball was dropped, we talk about the thinking at the time and how do I respond to it. I’ve been working really hard on that psych aspect and try not to get caught up in the moments when things don’t go so well and beat myself up. I just focus on the next job and that’s a big mentality we have here.”

How does an $8 braided Apple Watch band on Amazon compare to the $100 Solo Loop?