Editor’s note:Chinese leaders took part in a grand gathering in Beijing on July 7, 2014 to mark the 77th anniversary of beginning of the Chinese people’s war of resistance against Japanese aggression.

[10:19] Now the ceremony is over. Attendees now visit the theme exhibition.

[10:03]Xi first looks back the history of Japanese invasion in his speech.

[09:53]China will release the videos of Japanese surrender to China for the first time, according to a curator of a war memorial in Hunan.

[09:37] China announced in February that it had designated December 13 as the national memorial day for the Nanjing Massacre victims, with the aim of preserving the memory of the Chinese murdered by the Japanese invaders, and educating people about the wartime crimes committed by Imperial Japan. 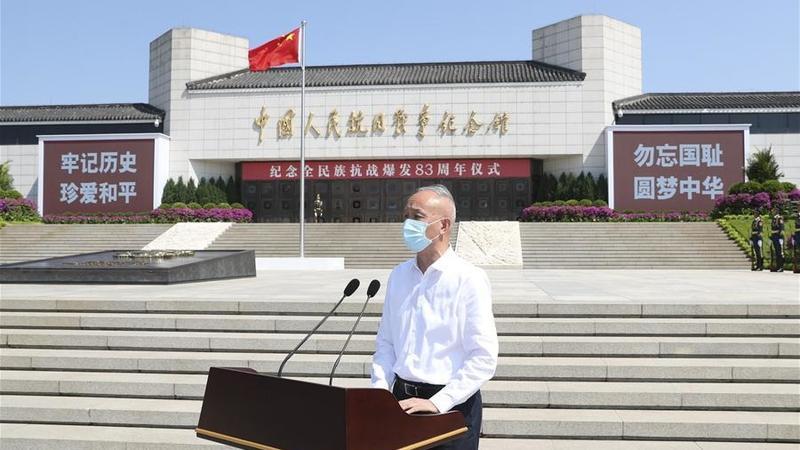 [09:22]China’s State Archives Administration announced on Thursday that it will put full texts of confessions by 45 Japanese war criminals online from Thursday: one a day, over 45 days.

[09:19] The National Memorial website (http://www.cngongji.cn/) was unveiled by Xinhuanet and the Memorial Hall of the Victims in Nanjing Massacre by Japanese Invaders, and it includes editions in three languages: Chinese, Japanese and English.

[09:15] China launched a national memorial website on Sunday with the aim of allowing the public to commemorate victims of the Nanjing Massacre committed by Japanese troops during World War II.

[09:11] China’s State Archives Administration announced on July 3 that it will put full texts of confessions by 45 Japanese war criminals online from Thursday: one a day, over 45 days.

[09:07] The War of Resistance Against Japan was a turning point in modern Chinese history. It ended the divided situation in which China found itself since the Opium War of 1840. It aroused the Chinese people, filled them with a common hatred against the enemy, and enhanced their traditional national spirit as never before.

[09:05] China’s War of Resistance Against Japan was a righteous struggle against a war of aggression provoked by Japanese militarists against the will of the Japanese people. As for the Chinese, it was an anti-aggression war to defend state sovereignty and vindicate national honor.

[09:04] People will never forget August 15, 1945, the date on which the Japanese government issued a note to the Allied countries, announcing its unconditional surrender. Japanese militarism, the No.2 war criminal in World War II, collapsed. The Chinese people won the final victory in the anti-Japanese national liberation war through their bitter struggles.

[09:02] China was the first country to fight the Fascist aggressor, experiencing the longest period of struggle, and suffering great sacrifices and heavy losses. An important part of the international anti Fascist war, the Chinese people’s War of Resistance Against Japan was closely bound up with it.

[09:01] The anti-Fascist war between the 1930s and 1940s was the first just war of a global scale in human history. It ended in the Axis’ unconditional surrender in 1945, 60 years ago. Over 2 billion people in Europe, Asia, Africa and Oceania (exceeding four-fifths of the world population at that time) were involved in the war. People who had experienced that unheard-of calamity will never forget those days when flames of battle raged everywhere.

[09:00] The July 7 Incident, or the Lugouqiao Incident, in 1937 marked the beginning of China’s War of Resistance Against Japanese Aggression, which lasted eight years.

[08:44] The Japanese aggression caused 35 million deaths and casualties of Chinese people and US$600 billion of economic losses in China.

[08:43] On July 8, the Communist Party of China published an open telegram to the whole nation, calling upon the people of the whole country to rise in resistance against the Japanese aggression. On the initiative of the CPC, the Anti-Japanese National United Front formally established on the basis of the KMT-CPC cooperation.

[08:42] The local Chinese troops fight heroically back and thus started Japan’s all-out aggression against China and China’s War of Resistance against Japanese Aggression.