Location
Home → Article → Bike computer vs smartphone vs smartwatch | Which smart device is best for cycling?

Having said that, some bike computers, like the Garmin Edge 1030 Plus, do rival smartphones for screen size.

Smartwatches are popular with mountain bikers because they often run short stems on their bikes and can’t fit a bike computer, but they have smaller screens too, which can make navigation harder.

Are you recording your commutes or clocking up hours in the saddle base training and building endurance? The type of riding you do is probably the biggest determinant of how much battery life you’ll need.

Using GPS tracking on a smartphone will significantly impact its battery life. As a result, a smartphone is unlikely to record long rides unless you carry an external battery pack with you or charge it with a dynamo, but it will probably last long enough to record activities of up to an hour.

However, bike computers and smartwatches are designed to be used for long periods and tend to come with a longer claimed battery life than smartphones, with some exceeding 20 hours. This makes them an ideal choice if you’re heading out for more than a couple of hours.

It’s also a good idea to preserve your phone’s battery life in case of an emergency if you’re heading out on the road or trail, so using a secondary device could be a better option.

Spend enough time riding a bike and, at some point, you’ll end up riding in the rain and maybe even snow. Bike computers and dedicated cycling watches are designed to be weatherproof and withstand harsh conditions.

If you’re going to use a smartphone for your riding it can of course be placed in your pocket, but it won’t be much help with navigation tucked away. You can mount a smartphone to your handlebar with a dedicated bike phone mount, of course.

Resilience is also worth keeping in mind, and bike computers are built to withstand possible impacts. Smartwatches are also built to be resilient and have the added benefit of being attached to your body – there is nothing quite like fishing through stinging nettles to find your bike computer after a tumble.

A smartphone will let you navigate on a bike ride using a dedicated, downloadable cycling app such as Strava or Komoot.

Many of the best bike computers come preloaded with in-depth maps that are similar to topographic maps and have detailed roads, trails, waypoints and amenities.

You often have to plan routes via an app and send them to the bike computer, but others let you drop a pin and will automatically route you to your destination.

It’s worth noting that many computers only come with certain map territories loaded onto them, so if you’re travelling to new regions you may have to purchase extra maps.

Like bike computers, GPS smartwatches will work with route building apps, but often they only have snail trail or breadcrumb maps. 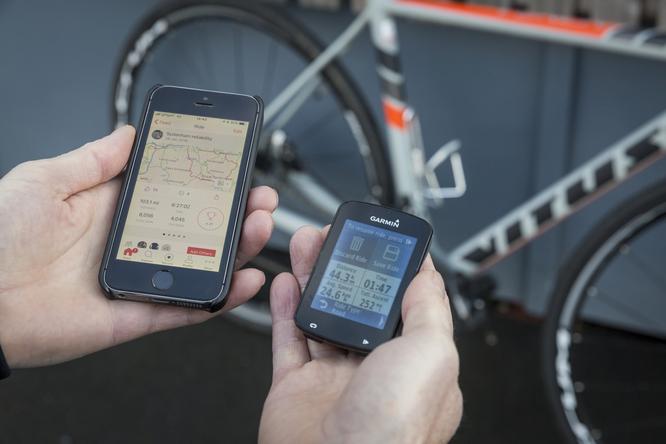 Almost all bike computers, smartphones and smartwatches use a combination of GPS signals and hardware in the device to establish speed, distance and elevation. But differences in hardware and the quality of satellite data can lead to discrepancies.

To get around this, many devices have a barometric altimeter built-in that establishes elevation via atmospheric pressure and accelerometers that will measure speed in the device itself rather than relying on satellites. Some will also allow you to connect to a speed sensor mounted on your wheel.

These systems work well and get around the issue of GPS dropout, but weather can affect barometers, giving an inaccurate reading.

Generally, accuracy is good across devices with many able to pinpoint your position to a matter of metres and pick up a GPS signal quickly. However, there can be outliers and some work better in dense environments, such as woods, than others.

Some lower-priced smartwatches won’t have a dedicated GPS chip in them and will piggyback off your smartphone for directions instead. This can drain the battery on your phone, so it’s advisable to get a watch that supports GPS itself.

It goes without saying, but smartphones can host many of the best cycling apps, although you might be surprised by what cycling computers and smartwatches can do when it comes to app support too.

Many computers and watches can host apps such as Strava, allowing you to access routes and upload rides directly.

Some of the best cycling watches can also host apps like Spotify and others will support contactless payments. This makes them functional and attractive beyond exercise and more aligned with other smart technology.

Pairing your bike computer or smart device with a power meter or heart rate sensor can unlock some serious insights into your riding, such as Functional Threshold Power (FTP), VO2 max, power-to-weight ratio and training zones.

Many devices will also connect with a smart trainer allowing you to use them to monitor and control your indoor training.

For the most part, auxiliary devices will connect to your phone, bike computer or smartwatch via Bluetooth.

While connecting devices has got easier over the years, it’s worth noting that some power meters only use ANT+ and therefore won’t connect to some smartphones or smartwatches.

Many bike computers and smartwatches will link to a smartphone via Bluetooth, though. Brands such as Wahoo and Garmin let you update and control their devices via apps on your phone and will send push notifications to your bike computer or watch for incoming messages and calls.

A bike computer can cost as little as £40 for devices that simply record distance and speed, but prices can go over £300 for feature-packed GPS computers that will do everything from recording a ride to suggesting recovery time.

Smartwatches have a similar price range, with some £50 models recording heart rate and connecting to your phone for a GPS signal, while models over £300 will likely have every feature a top-shelf bike computer will and possibly more.

Smartphones are often one of the priciest things we own, and when they function much like a smartwatch or bike computer, investing in a secondary device can seem like an unnecessary luxury.

On the other hand, investing in a dedicated device for cycling and keeping your smartphone out of harm’s way might seem like a worthy investment.

Weatherproof, crash-resistant and designed to fit on handlebars, bike computers stand up where other smart devices fall down.

Recording GPS data is also essential for some riders and bike computers have a long battery life to do just that. Modern large touchscreens make navigation a breeze, too.

Bike computers will also link up to practically any other cycling smart device, so if you’re looking to up your training to the next level with a power meter or cadence sensor, it’s unlikely you’ll have to worry about compatibility issues.

There aren’t really any disadvantages to bike computers when it comes to cycling, but there are a couple of things that may dissuade you.

If you’re just starting out, you’re shopping on a budget or have no intention of going on epic rides, the cost of a bike computer might be off-putting when your smartphone can do many of the same things.

A bike computer is also solely designed for cycling, so if you run or take part in any other sports, you might find a smartwatch is a cannier way to spend your money.

A smartwatch will carry out many of the same functions as a bike computer but with the added benefit of having specific functions for multi-sport activities, such as running and swimming.

As they are worn on the body, they are popular with people who do cross-training, triathlon and even cyclocross, where racers will often switch between bikes mid-race.

Smartwatches often tend to have in-built heart rate sensors and can provide insight into everything from sleep quality to recovery.

The fact some can store music and make contactless payments makes them useful beyond exercise too.

While smartwatches can provide insight into other sports and general health, this diversity of functions can also be a hindrance for the pure cyclist.

Many smartwatches don’t provide quite as much insight into your riding as a dedicated cycling computer, simply because they are trying to do many other things.

Also, although smartwatches often feature heart rate sensors, they are generally considered to be less accurate than heart rate straps.

Having the device on your wrist can also make it more difficult to read while on the go – especially if it’s under a winter jacket. The smaller screen may also make navigation trickier.

The likelihood is you already own a smartphone, so all it will take to start recording rides is downloading an app like Strava, with no extra payout for a dedicated cycling device. This makes a phone a brilliantly easy and affordable way to get greater insight into your riding.

With many heart rate monitors and power meters now connecting to recording devices via Bluetooth, it won’t be too difficult to delve deeper into how you’re performing on the bike either.

The biggest drawback to using a smartphone to record your rides is the effect GPS use has on battery life. As a rough estimation, if you’re riding for over an hour, you’ll probably want to take an external battery pack to top up your phone.

A smartphone is a big investment and they aren’t always the most durable devices, so having it mounted on your handlebar can expose it to all sorts of weather, and increases the chance of it smashing if you crash.

Smartphones can match the functionality of bike computers and smartwatches in a lot of ways, but they don’t provide quite the same number of cycling-specific features.

Finally, while more devices are able to connect to smartphones some still can’t. So relying on a smartphone can lead to some headaches if you want to invest in any extra devices.

What’s best for you?

Quite simply, bike computers are made for the job. If you spend a good amount of time riding your bike then a cycling computer will likely trump a smartphone or a smartwatch when it comes to usability, durability and functionality.

They include all the features you will likely ever need for cycling and will prove even more useful the further you progress into the world of long-distance cycling and training, with data such as power and heart rate.

But smartwatches and phones do have their place in the world of cycling.

If you do other sports, like running, or fancy doing a triathlon one day, a smartwatch might prove to be a worthwhile investment due to its multi-sport potential.

Smartwatches also have the advantage of monitoring other aspects of your health, which might be something you’re interested in.

A smartphone is an ideal way to dip your toes into recording rides and on-bike navigation. If you’re just starting out or don’t fancy spending money on another smart device yet, a smartphone will still get you a long way.

How to Set Up Your New Headphones

www.makeuseof.com WatchOS vs. Wear OS: Which Is Best?