Arbroath ace Nicky Low says he is happy to give up any future career as a handy man if it means getting back playing from injury.

A recurrence of an ankle knock saw the midfielder sit out nearly a month of action for the Lichties.

The 31-year-old spent most of that time resting up at home – but he did try his hand at some painting.

However, the part-time star admits a career in the trades isn’t for him.

“It’s good to be back fit,” he told Courier Sport.

“I am still in a bit of pain but it’s nowhere near [as painful as it was] previously, I can actually sprint now.

“I was helping my brother move into his new house.

Fair play to all the painters out there.. the young brother & me has been at his house for days getting nowhere 😂 pic.twitter.com/9DGvEe2EKb

“He got me roped in with him for a few days but, sadly, that will be the end of my painting career.

“I was going off my head. I felt like I was painting and someone was coming behind me rubbing it off!

“I didn’t really do too much else apart from some bike work at the gym and in the pool to keep the pressure off my ankle, I just had to rest up. 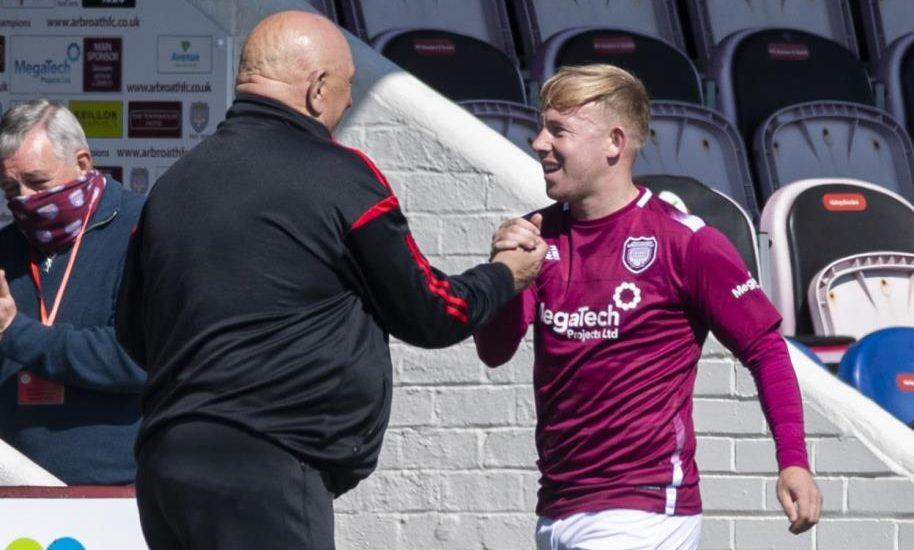 “I don’t think my wife Natalie was too happy, I milked it a few times.”

Low made his second appearance since returning from injury in Saturday’s 1-0 win over Ayr.

While he admits it wasn’t a match for the purists, the central midfielder was just happy to get some more game time.

“There is still a lot more to come from me, I just need to build my fitness up,” he said.

“Saturday, with the wind, it wasn’t a game for football. The two teams battled well.

“It was just good to get the 80 minutes in my legs and hopefully that will do me good for this Saturday against Raith Rovers.”

Low has fond memories of the last encounter with Raith, netting the winner in a 2-1 comeback at Stark’s Park.

The last match up at Gayfield was harder to watch, with the game ending 0-0 after a hard-fought 90 minutes.

At the time, Raith were second while Arbroath were fifth.

Fast forward to today and the roles have been reversed, with John McGlynn’s side scrambling for the play-offs.

Low doesn’t expect the visitors to come with the same defensive attitude this time around.

“I didn’t play the game last time, but watching on from the sides John McGlynn gave us a lot of respect,” he said. “He changed his formation and team.

“I’d be very surprised if they play the way they did last time. It looked like they set up looking for the draw.

“I do expect them to come and have a go at us. They’re fifth just now, three points behind fourth place.

“They know anything other than a win, with six games to go would be very costly.

“It’s the same as ourselves. We need to be winning games, a draw isn’t good enough.

“It will make for a fascinating game and hopefully there will be a big crowd to play in front of.”

Tags:  how to set the time on my fitness tracker