The Apple Watch Series 7 wasn’t quite what we thought it would be. It has a slightly bigger display, a few new colors, and slightly faster charging, but otherwise, it’s identical to the Apple Watch Series 6, from the chip to the sensors. So that means the Series 8 will be the one to, er, watch, in 2022

December 8: Bloomberg’s Mark Gurman and Ming-Chi Kuo (via 9to5Mac) both report that several new Apple Watch models will arrive in 2022, including a new SE and a ‘rugged’ version of the Series 8.

We haven’t heard any specific rumors about the design of the Apple Watch Series 8, but we had heard a flurry of rumors about a new Series 7 design that didn’t come to pass. Jon Prosser of Front Page Tech reported in May 2021 that Apple is working on a new Apple Watch design, one that has flat edges like the iPhone 13 and iPad mini. Additionally, analyst Ming-Chi Kuo said that the 2021 watch would feature an “improved form factor.”

Meanwhile, Bloomberg’s Gurman reported in August that “a bit of a redesign, with flatter displays” is expected, while 91mobiles published reported CAD renders of the upcoming Apple Watch Series 7 showing a similar design to Prosser’s leak, with flat edges and a thinner frame (9mm vs 10.7mm). It’s starting to sound like the Apple Watch Series 7 will look different but not dramatically changed (like a square or circular design).

That’s a lot of smoke for no fire, so our intuition tells us that the redesigned Apple Watch was either scrapped or delayed. With a massive supply crunch affecting all of Apple’s products, it makes sense that Apple simply opted for a simpler design in 2021. 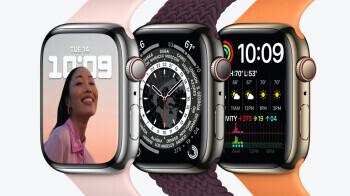 In mid 2021, Gurman reported that the Series 7 watch would sport “updated screen technology” while 91mobiles added Apple may be using “a new lamination technique that is expected to bring the panel closer to the front cover.” While we did get thinner bezels and a harder coating, the Apple Watch Series 7 appears to use the same overall display tech as the prior models. So we’ll be keeping an eye out for a new screen process in the 2022 flagship model.

There might also be a new size in addition to the 41mm and 45mm models. Ross Young of Display Supply Chain Consultants reported in October that people should “not be surprised” if there are three models in 2022. That would presumably mean that Apple will introduce a larger model that’s in the 48mm-50mm range.

While the Apple Watch Series 7 has identical health features and sensors to the Series 6, the next model could bring huge advancements. A report by The Telegraph in May 2021 divulged that that Apple is a customer of a company that specializes in next-gen health sensors, fueling speculation that future watches will have blood pressure, glucose, and alcohol level monitoring. However, Bloomberg reported that while Apple is working on such functionality, it might not be ready “for several more years.”

In February, Gurman reported that“the oft-discussed body temperature feature” could make an appearance in the Series 8, but otherwise he isn’t expecting “any major new health sensors this year.” However, he is more confident that “major updates to activity tracking” is on the way.

In January, Apple stopped selling the Beddit sleep tracker, a device that measures sleep time, heart rate, breathing, snoring, bedroom temperature, and humidity. Apple acquired Beddit in 2017, and it’s been rumored that it will be bringing much of its advanced sleep tracking features to the Apple Watch Series 8.

Mark Gurman of Bloomberg reported in December that Apple could release an Apple Watch with a “rugged casing,” which could appeal to users who participate in extreme events and sports. Such a watch would presumably have an exterior that’s more scratch- and impact-resistant to better compete with Casio and Luminox rugged watches. A rugged watch was also rumored for 2021.

The Apple Watch Series 7 tech specs list an S7 system-in-package, but numerous reports suggest that it’s new in name only. For all intents and purposes the S7 chip is the same as the S6 chip.

However, Apple was indeed working on a brand new processor for the Apple Watch Series 7 that never saw the light of day. Back in June, a DigiTimes report claimed that Apple will use a new double-sided chip packaging process to further shrink the size of the S7 chip, which could allow room for more battery or other components, or to shrink the overall thickness of the watch. A follow-up report from the Economic Daily news out of China suggested that Apple was freeing up space to make room for a larger capacity battery.

That also didn’t happen. While Apple doesn’t list the capacity for the Apple Watch battery in the tech specs, all indications are that it has a similar sized battery around 300mAh. So a battery update for the Series 8 is definitely on the table, especially since reports were swirling that a big breakthrough was on the horizon. For example, Twitter account @pinleaks, which is run by Max Weinbach and leaked accurate information about the AirTag ahead of the “Spring Loaded” event, reported that the Apple Watch Series 7 “is bound to see its first real battery life improvement since the original Apple Watch.”

Bloomberg also reported that the Series 7 watch could bring updated ultra-wideband functionality that didn’t arrive. Apple first introduced the ultra-wideband U1 chip with the Apple Watch Series 6 and since has expanded the tech’s usefulness with AirTag trackers and digital keys in Wallet. It’s not clear how Apple would upgrade the tech in the Apple Watch Series 7, but it will likely mean a U2 chip.

Other than the Solo Loop bands, which aren’t compatible with any model before the Apple Watch Series 4, Apple has supported all previous bands with each model of the Apple Watch, including the Series 7, so there’s no reason to think that the Series 8 will break that trend. The Series 7 watch delivered a new round of colors, but didn’t introduce any new band styles.

After Apple neglected the Apple Watch SE in 2021 without so much as a price cut, Mark Gurman reports that it will get a refresh in 2022. We haven’t heard any other details, but if Apple follows the same cadence, the 2022 Apple Watch SE will be closer to an Apple Watch Series 6, with an always-on display and extra sensors (ECG and blood-oxygen). If Apple keeps the same $279 price tag that could be a very compelling wearable.

Apple has predicatably released a new Apple Watch in early fall since 2016 so it’s nearly certain the Apple Watch Series 8 and SE will arrive in either September or October. We expect the price to stay the same as well, with the Series 8 starting at $399 and the SE starting at $279. The rugged model will likely cost more, but we need to learn more about it.

Design and install your own custom Android Wear watch face

How to use a wearable: tips to make the most of your smartwatch or fitness tracker