Back in 2017, we thought the Apple Watch 3 had a great display. Bright and vivid, the OLED technology shone through. But now, compared to the Watch 7 or Watch SE (which are also on sale) it looks tiny in comparison.

The biggest change is the bezels - they look super chunky on the Watch 3, coming in over 4mm compared to the 1mm off the Watch 7. Given the casing hasn't altered that much in size (the Watch 7 is now available in 41mm and 45mm sizes, compared to the 38mm and 42m options of the Watch 3) the reduction in bezel is stellar, and with the Watch 3 you've got so much less space to poke at.

It's not as bright as newer watches either, but we can't say we really struggled with seeing what was on it at all in this modern-day retest. Sure, it's not the brightest or largest, but it's always visible outside and when raising the wrist.

The Apple Watch 3 also lacks the always-on display, which will go dim when you lower your wrist, but still shows the time and some information. You need to flick your wrist in an exaggerated fashion with the Watch 3 to see the time, which is irksome (although, you will get used to the motion quickly).

In terms of the design, it's never really changed in terms of the way an Apple Watch looks - the Digital Crown on the side doesn't have the pleasant haptic feedback that newer watches have, but other than that it's just a bit smaller than newer models.

However, we would say the 38mm model is a little on the small size these days - if you can get away with the 42mm option, we suggest you check that out.

The Apple Watch 3, like its wearable siblings, is a cinch to set up. Hold it close to your phone and it'll instantly begin pairing, using the camera to start the connection. There you answer some questions about your preferences, set the passcode, establish some fitness goals and you're off.

It takes a while to get going, especially if you're restoring from a backup of an older Watch, but once it's ready you're good to go.

In terms of usability, there are few smartwatches on the market as good as the Apple Watch range in terms of how you use them - the notifications are rich and clear, the Taptic Engine (which makes it feel like the Watch is knocking on your wrist to let you know things are happening) is sublime and even the fiddly Digital Crown doesn't feel entirely useless all the time, especially when scrolling through a menu.

We would suggest that you change from the odd grid set up to a list view of your apps, as it's so much easier to find the title you want when it's in alphabetical order - although it doesn't look as nice, it’s easier to use.

The Watch faces continue to get better and better from Apple as time goes on, and now you can have quick access to features of many apps through the complications offered on the face. Whether it's tracking the phases of the moon, using your favorite images as wallpaper or celebrating Pride, Apple has many - although it's still hugely irritating it doesn't allow third-party faces yet, and you don’t get access to all the new Watch faces.

So, then, how does using the Apple Watch 3 feel day to day, especially in light of the other high-power smartwatches available, often not much more money (and sometimes less)?

Well, the first thing you might notice in a side-by-side comparison is the speed - the Watch 3 takes a few seconds to register tasks, jumping between apps taking a clear beat longer than you might expect.

This is OK a lot of the time, but when you're on a run and want to swipe to change your music, it becomes irritating.

However, when it comes to fitness tracking, the Watch 3 is still as good as more recent Apple Watch models in some respects. The Move Rings, the methods of following how active you are per day in a more visual way, are a nice way to help you stay healthy, and they're just as good on the Watch 3.

The GPS performance when you're out running is just fine - partly because you'll generally have your phone with you and it'll draw location data from that, but on its own it's still OK. Not as accurate as many others, as it can't sense as many satellites, but fine in terms of telling you how far and fast you ran with relative accuracy. 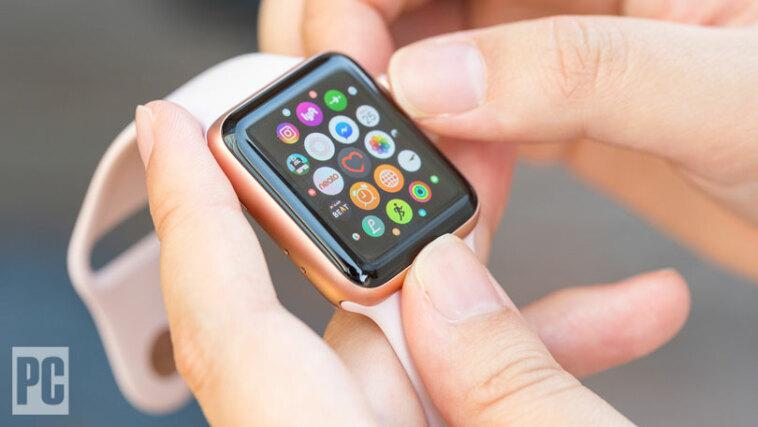 You can now track a wide range of activities with the Apple Watch, from dance to running to HIIT workouts, and we generally found the Watch 3 to be good enough in terms of tracking these sweat-inducing sessions and filling our fitness rings accordingly.

One thing that you can now do with recent software upgrades is track your sleep - but we wouldn't suggest you buy the Watch 3 (or any Watch) for that from Apple, as it's really basic information that doesn't really give much of an insight. You can download other apps to help you with this, but we think devices like Garmin or Fitbit are far better at the job.

The heart rate monitor on the back isn't the best out there either. We found it to be generally accurate, giving the same responses as other optical heart rate sensors (as in, using green LEDs to spot your heart rate on the go).

It's also a good enough system to let you know when you're having low or high heart rate moments that you may have missed or not expected, although it lacks a blood oxygen sensor or ECG function. But it sometimes would lose performance if you put it on the wrong part of your wrist, as it needs more sensors to compete these days.

Whether you need these though, is entirely up to you. We've not seen much use for them in our testing, so we think most people would happily live without them.

When it comes to battery life, Apple remains as confusing as ever, saying that its watches can last 18 hours but they often go further than that.

For example, we used the Apple Watch from 8:30pm one night until around 11pm a day later - this included a half-hour run in the middle, as well as constant connection to the Watch and heart rate monitoring. It also lost only 5% of battery during that run (while, admittedly, still connected to the phone), showing that the Apple Watch 3's battery resilience hasn't been harmed in recent software updates.

Apple has removed the Watch 3 LTE version of the device in recent years, allowing you to just buy the GPS-only version to keep it low cost.

That omission means you can't take or make calls on the Watch 3 when out and about, but you can use it to answer when a connected phone rings. The speaker is a little on the quiet side compared to later models, but fine enough.

But all the above doesn't really scratch the surface of what the Apple Watch 3 is capable of - if you're embedded in the world of Apple's HomeKit smart devices, you can raise your wrist to issue a command to turn off a lamp, or set automations.

You've got a nifty torch that can blaze light into a room, a Walkie-Talkie to chat to friends with (although we quickly tired of this gimmick to be honest), an easy voice recorder, and more.

If you like the idea of using your Apple Watch as a music player, then you should probably steer clear of the Watch 3 - it can do it, and can now store offline music from both Apple Music and Spotify. But with only 8GB of storage onboard, compared to the 32GB of newer Apple Watches, that's not enough in our opinion.

It’s a tricky question, and it entirely depends on whether you want a basic fitness tracker to sit alongside your iPhone, and whether you’re on a stricter budget.

If you can afford it, we suggest going for the new Apple Watch 7 or poking up to the Watch SE as a halfway house, as you’ll get more features and, crucially, a faster interface.

However, if you never try those models, you won’t notice too much as the Watch 3 works just fine. You won’t get the most accurate GPS tracking, heart rate or sleep tracking, but it’ll work, again, just fine.

You can get the smart meditation apps, the enjoyable Fitness+ platform and the range of apps and notifications that the watch is known for - if you want to get an older or less tech-infused family member into fitness, the Watch 3 could be a great starting point.

eThe latest and greatest from Apple, you could make a strong argument that the 41mm Apple Watch 7 is a much smarter buy than the Watch 3, such is its speed, fitness tracking and capacity improvements. That said, you get the same base performance for half the price with the Watch 3, so you’ll need to really want to maximize the benefits of the newest Watch to go for that.

For less than the Apple Watch 3 you can get a blood oxygen monitor, clear and bright screen, GPS tracking, excellent fitness insights and so much more from Fitbit Versa 4. Coupled with a great app experience and a much longer battery life, you might well consider this smartwatch - especially if you’re thinking of switching from Apple in the near future.

A little more expensive than the Watch 3, the Garmin Forerunner 245 nevertheless brings a suite of fitness, sleep and health tracking to its sleek body, and provides days of battery life that fully usurp that of the Watch 3. It might lack the build quality, but if you’re a more serious runner or cyclist, we suggest you head down the Garmin route - and the app is so much more fully-featured than Apple’s Health option too.

Tags:  does a fitness tracker have embedded software

How to set up your new Apple Watch

Here Are All the New Bands and Cases Apple Just Released for Apple Watch Series 7, iPhone 13, and iPad